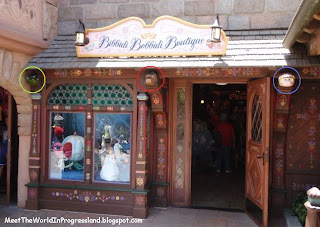 .
In yesterday's post, I mentioned that the Bibbidi Bobbidi Boutique in Disneyland is occupying the same space that was once used for the Tinkerbell Toy Shop. I also mentioned some Peter Pan themed wood carvings which still adorn the facade. I thought I would post the picture of the entrance again, but this time with the areas I was talking about circled. I have also included close-up photos of each of the carvings.
. 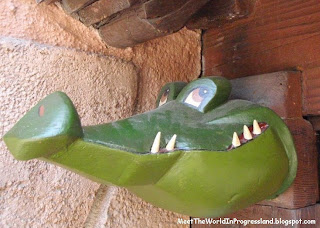 .
Notice the dust on top of the crocodile....someone needs to do a little housekeeping!
. 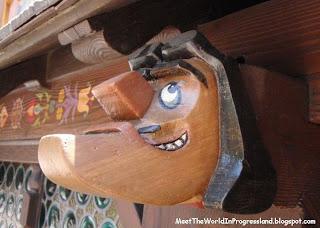 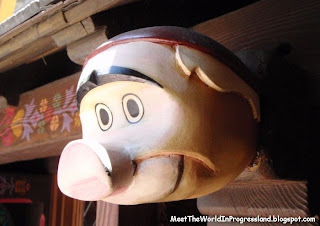 .
At one time, there was also a carving of Nana on the far right side of the roof. Unfortunately she was removed during the "New Fantasyland" construction in the early eighties, when the Snow White attraction next door received a new facade. I do love the fact that these other three carvings still remain today. It would have been so easy for Disney to remove them now that the space has a Cinderella theme. Now if only they hadn't torn down Captain Hook's pirate ship that used to sit in Fantasyland....or at the very least, if they had left Skull Rock so that it could be pouring water down into the pond behind Dumbo's Flying Elephants!
.
Posted by TokyoMagic! at 2:01 AM

Nice to see those are still in place, I've never noticed them before!!! Nice post on the "Bibbidi Bobbidi Boutiques" its the only way I'm ever gonna see the inside! Email me about this Friday! -Tim