I am going to be tying up a loose end today. It's my finale to the Knott's Sky Cabin series of posts that I ran back in March. Why did it take me so long to end that series? Well, I guess I've been kind of lazy....or distracted.....or both! 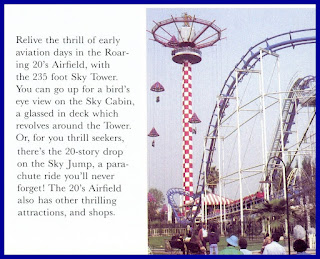 These last images are miscellaneous photos that I did not have older comparison pics for. I would like to thank Major Pepperidge again, for letting me use his vintage images for my previous Sky Cabin posts!

This first pic shows one of Xcelerator's cars reaching the highest peak of it's track, which is 205 ft tall....roughly the same height as the Sky Cabin Tower. The intersection below is La Palma Ave. and Western Ave., which we saw in Part 3 of this series. 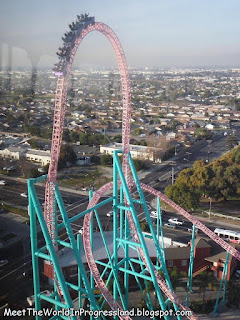 Here is the view looking north up Western Ave. The red building on the right is the former home of Movieland Wax Museum, which we saw in Part 4 of this series. The yellowish building with the gray roof in the lower portion of the middle window is the barn used to keep the park's stagecoaches and horses. 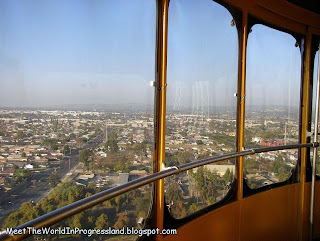 Just beyond the barn is Bud Hurlbut's property where his amusement company was located. 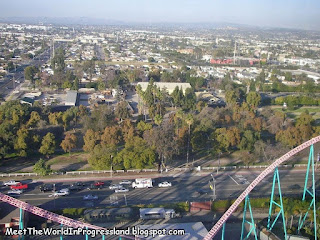 Here's a "satellite view" from the internet. The stagecoach barn can be seen along with a few horses outside of it. Bud Hurlbut's company was located on the property between the barn and the row of houses seen in the top of the photo. 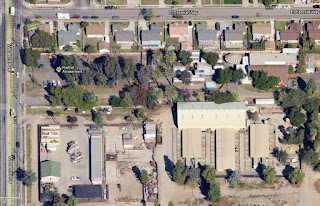 If we zoom in, we can see a striped tent. I'm just wondering if there is some wonderful Hurlbut ride underneath it? 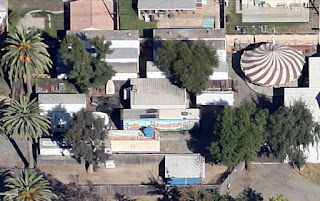 This structure sits on the property and I believe it was Bud's workshop. I'm hoping someone out there will chime in and let me know for sure. There was an estate sale on the property recently and I wish I had known about it! There were carousel horses, trains, and even a Knott's Berry Farm "Happy Sombrero" ride vehicle for sale! 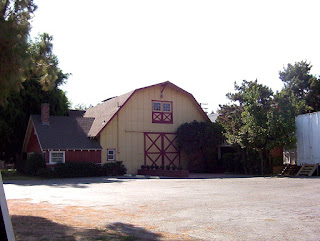 Continuing on with our photos taken from the Sky Cabin, this is the view looking northeast towards Supreme Scream. We saw this view in Part 5 of this series, but we never saw the very top of the Supreme Scream tower. 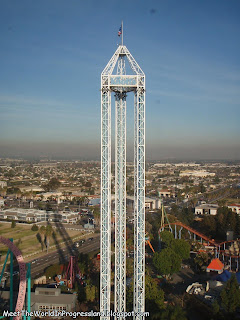 And just for review, I've circled the two bank buildings/murals and the Camino Real arches that we also saw in Part 5. Blogger "Outsidetheberm" commented on that post and provided us with some info about those arches. Here's part of his comment from that post: "The arches were built in early 1956 as part of the El Camino Real Mission Walk. The mission models were built by Leon De Volo. The arch in your post is the northern San Francisco arch while the southern arch (near the town square) was the San Diego arch." (Thank you, Outsidetheberm!) Unfortunately, the other arches that were locate in Calico Square were torn down within the last 10 years or so. 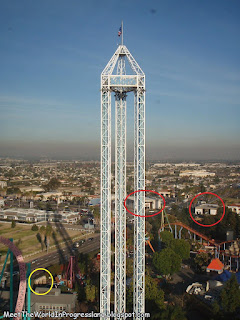 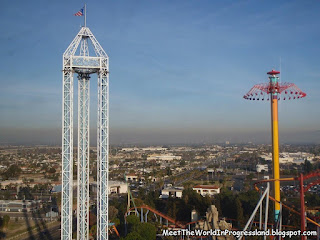 And now we are turned even further east. (By the way, the Sky Cabin turns to the left, so I know that I've posted these in the opposite order.....sorry about that!) 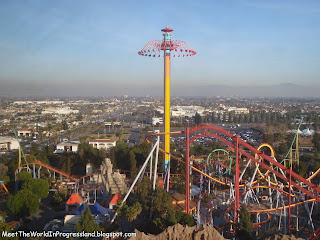 Here's the same shot with the bank buildings circled again and this time I've circled the old Buena Park Mall (in blue) in the distance. 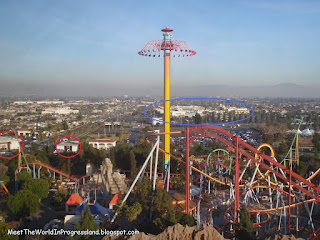 I'm going to include some photos of the mall "just because." Actually, it's because I have fond memories of going there as a kid. 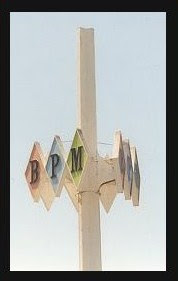 At one time, the old sign read, "BPC" for Buena Park Center. At that time, it was an outdoor shopping center. In the late seventies, a roof was put over the center and it became "Buena Park Mall." Today, the original sign is gone and the mall has been renamed "Buena Park Downtown"....which makes absolutely no sense to me! 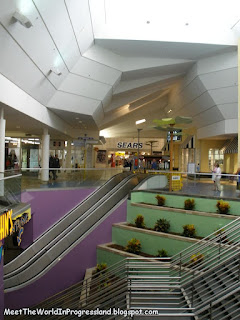 You can tell how successful the renaming of the mall was by the four or five people visible in the photos above and below! 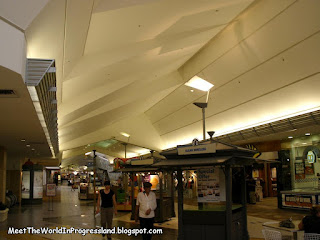 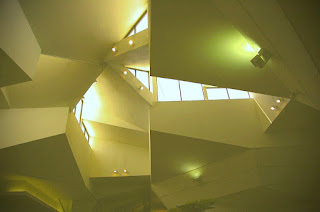 I also remember visiting this mall as a kid before the roof was added over the center. I remember there were piles of large rocks for kids to climb on and that one of the sets of rocks had a tunnel to crawl through. I have searched for vintage pics online, but have come up with nothing so far. If anyone out there has early photos of the shopping center and those rocks, I would love to see them!

The mall is kind of in sad shape today. The May Co. and J.C. Pennys both closed a long time ago. Most of the large downstairs food court area has been converted into a pizza arcade-type of business. Most of the chain-type of stores have been converted to small independent businesses. I recognize the shop below with it's glass front, but I can't remember what it was originally. It was a clothing chain that was located in many of the malls....was it The Limited? 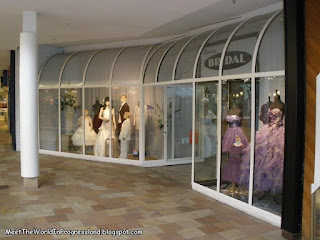 This store used to be a Foot Locker shoe store, but today you can buy a statue of Jesus, an indoor water fountain, or your very own copy of the Mona Lisa! 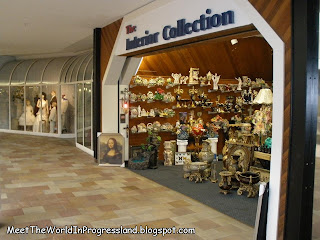 I may have strayed a little in this post, but if you've read this far, thank you for letting me reminisce! I will end the post and this series with a piece of concept art for the old Sky Jump tower and the Sky Cabin which is labeled here as "Sky Flight." I wish the Sky Jump part of the tower had not been shut down and removed, but I am very glad that the Sky Cabin has reopened. The next time you're at Knott's, make sure you go for a ride in it and show Cedar Fair that there is still an interest in these slower-paced family type of attractions. Maybe we can get them to bring back the Haunted Shack and Knott's Bear-y Tales!!!!! 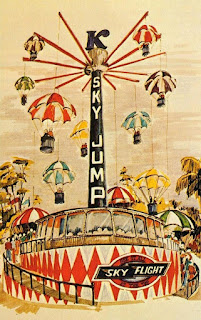