Welcome back to "March Miscellany!"   Just a reminder, I'm doing something different for the month of March, and posting multiple times throughout the month.  This is post #2.

This set of "Rowan & Martin's Laugh-In" paper dolls is another childhood item, which came from a "Lucky's" supermarket.  During a visit with my grandparents in the early 1970s, I went with my grandmother to her local "Lucky's" grocery store.  As usual, I was drawn to the store's "toy aisle."  I don't remember if I was looking at this item and my grandmother told me she would buy it for me, or if she told me to pick something out and this is what I chose.  But I ended up coming home with it. 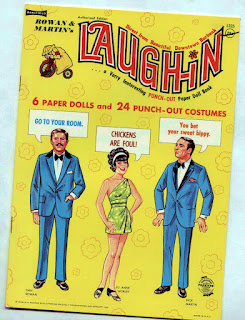 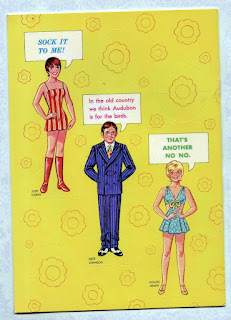 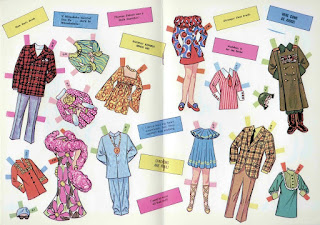 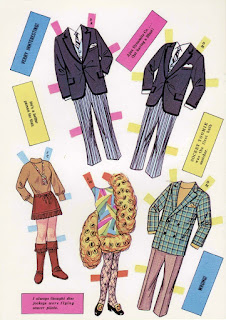 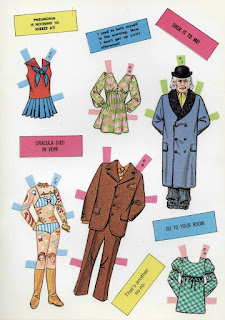 This is what's left of my set.  Unfortunately, Jo Anne Worley went missing a long time ago. Dick Martin was one of the show's co-hosts: 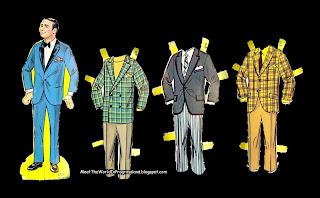 Dan Rowan was the other co-host: 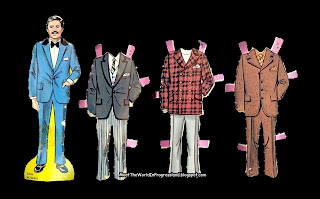 Goldie Hawn left the show after the third season, and went on to have a very successful film career. 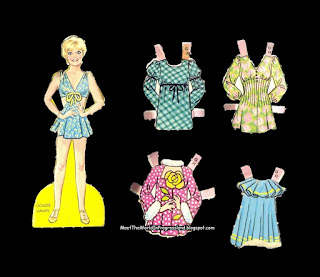 Judy Carne (the "Sock It To Me Girl") kind of looks sunburned, here.....or jaundiced.  The discoloration on her face is from a piece of Scotch Tape, which I used to try and keep her head "on." 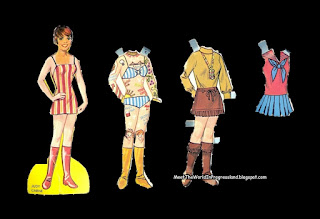 Jo Anne Worley was lost, but she left behind most of her wardrobe. 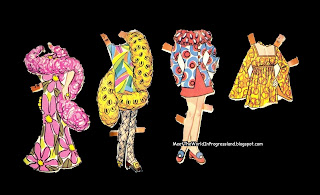 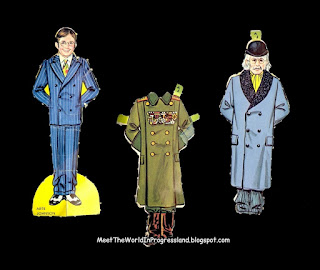 I think the only reason that any of these paper items survived at all, is because I stored them in this box.  The box originally contained pieces for building a "miniature chapel," to use with model train sets. 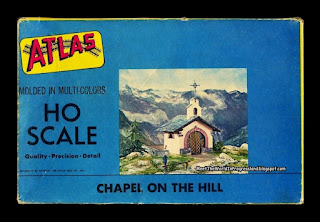 The side of the box pictured other models, which were available from the ATLAS company.

While growing up, my family did have a train set, which would get set up every year, underneath our Christmas tree.  The "Chapel On The Hill" model can be seen in the photo, below.  There are also some other models visible....a couple of houses, a little train station, and some animal holding pens/stalls. 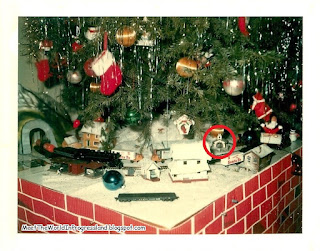 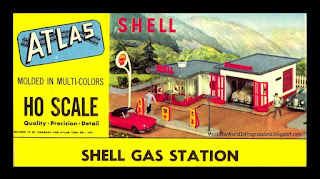 The Sears price tag was still on this one, but I can't make out what the actual price was.

I'm not sure why these empty model boxes survived, but they did, and were found stored in my family's garage.  My brother has the actual assembled models, now.  If I get a chance, I will photograph them and include them in a future post. 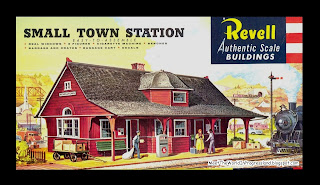 This one still contained it's instructions for assembly: 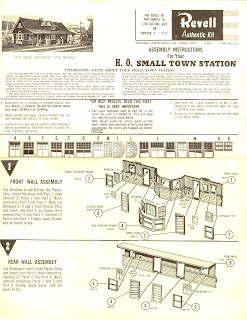 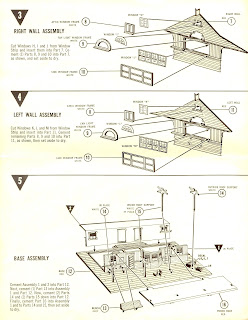 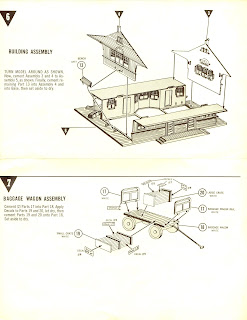 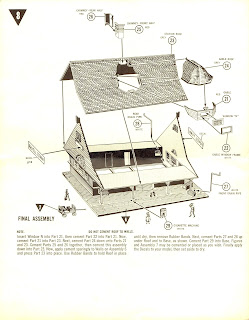 Please check back throughout the month of March, for more "miscellany!"

The Rowan & Martin's Laugh-In paper doll punch-out book is super cool. What a gem! Jo Anne Worley, Goldie Hawn and Ruth Buzzi are the only three who are still alive from that show who were part of the main group unless I missed someone.

I love toy trains and have a bunch of Lionel trains and buildings. I still do set up a train with a village around my Christmas tree every year as well.

I love the corrugated paper brick around the base of the tree. The set-up is quite beautiful along with the Christmas tree.

Ken, I think you are right about who is still alive, of the original "Laugh-In" cast. Lily Tomlin is still alive, but she was added to the cast later (Season 3, I think). And that's the truth! Thhhhhhhbbbbbtttttt!!!

I love the idea of a toy train and village under the Christmas tree, and have fond memories of it from childhood. For some reason, I never attempted to recreate those memories as an adult. However, one year, I did set up my miniature DL Monorail set, underneath my Christmas tree.

Wow, I love the instructions for the model buildings.

Since this is what I do for real buildings, it's fun to see how much simpler work would be if I just did models.

My Mom had a little plastic church with a light and a music box movement that played Silent Night. I have no idea where it went.

You have the best stuff, Tokyo, thanks for sharing it.

I used to have some Laugh-In day-glo stickers: “Here comes the judge!”. “Sock it to me!’ “You bet your sweet bippee!”. “Flying Fickle Finger of Fate”. And so on. I loved to look at them with my black light. I can only assume that my mom tossed them, since I would never have parted with such treasures. I love your paper doll set, but am disappointed that Jo Anne Worley is lost. And where is Ruth Buzzi? RUTH BUZZI? Come on! I liked Judy Carne, but we needed some Buzzi. I wonder if Mike Cozart knows about those Atlas models? I’m amazed that your brother has those assembled models, that’s the sort of thing that goes into the trash or to the thrift store when spring cleaning happens. Fun stuff!

The house we moved into when I was seven had a Laugh-In trash can in the back bathroom. It was kind of a dark and creepy room, so for years the sight of anything to do with the show kind of creeped me out. When I finally actually saw it as a teenager, I loved it. Kids are weird!

JG, thanks! Now you've got me thinking about the real, full scale houses that were sold by companies like Sears, at one time. I suppose on the surface, their assembly instructions wouldn't look too different, than the instructions for one of these models? Of course, more than just glue had to be used for the real thing.

Major, your day-glo stickers sound cool! And it sounds like you didn't "use" them. I rarely ever stuck stickers on anything as a kid, and preferred to just keep them as they were. I still have all of my old unused "Wacky Package" stickers!

I am not sure how Jo Anne Worley went missing, but yet all the other figures got saved. And now I'm wondering if Ruth Buzzi felt left out, when this product hit the shelves. Maybe she was included on some other Laugh-In merchandise? It does seem odd that they would include the "old man" costume for Arte Johnson, but not a Ruth Buzzi figure for him to "harass." How was I supposed to recreate those scenes from the show, with only one of the characters?

We'll have to see if Mike checks in and comments on this post!

Melissa, did the Laugh-In trash can come with the house, or was it something that your parents had bought? And now I'm wondering if Ruth Buzzi had been included on the trashcan!

Okay, I just checked ebay. I found one Laugh-In trash can for sale, and Ruth Buzzi IS on it!

Holy crow, TM! That sure brings back memories! It came with the house. It always seemed like an odd thing to leave behind. In the other bathroom, they left a bottle of men's aftershave shaped like a CB radio. Weirdos!

Melissa, ha, ha! The previous residents of my home left behind a vintage Cap'n Crunch whistle, a souvenir wooden tomahawk from some specific U.S. city or state (can't remember where, now), and a deck of cards with naked women on them, from the 1940s or 50s. Yeah, weirdos!

The [divorcing] guy, who we bought our first [handy man special] house from, left behind a lot - but it’s been more than 40 years and I can only remember a few things: men’s magazines, many bottles of booze, sticky kitchen drawers with lumpy food stuck in them, and kitchen carpeting full of dog pee-pee. He had two Dobermans. Gee, I wonder why his wife left him?!?!

I forgot to add this to the end of my first paragraph above: Definitely, ‘Weirdo!’

Sue, kitchen carpeting.....EEEEEEWWWWWWWW! I think carpeting in kitchens and bathrooms is gross!

I just remembered more stuff that was left behind, in my garage. There was a sword (in a metal protective sheath), a pair of antique wooden crutches, a wooden cane, and a wooden shillelagh. Since yesterday was St. Patrick's Day, I should have gotten the shillelagh out and danced a jig with it. But I didn't.

In one house, we even had SHAG carpeting in the bathroom! I guess we were weirdos, too.

Melissa and Sue, we had avocado green shag carpeting, when I was a kid. When my mom had it replaced in the 80s, she insisted on carpeting the bathroom. She always liked it when she went to somebody's house and they had carpeting in the bathroom. What she didn't realize is that it does not hold up as well as the carpeting in the rest of the house. Between the steam from the shower and other dampness in the bathroom, it's just kind of gross.....to me, anyway. Not to get too graphic, but toilets do overflow on occasion!

TM! When I think of avocado green carpet, I think of that short ‘sculptured’ carpet that was super popular, too, back then. My neighbors had that in avocado green. My husband and I also refer to that color as ‘grandma green.’

That first handyman home we had was mostly carpeted in the multi-earth-tones shag, when we bought it. Our two Maine Coon cats blended in with the carpeting, so we learned to be extra careful so as to not step on them. Our kitchen came with those individual carpet squares, but not in shag...more like indoor-outdoor. Refer to my earlier comments about this carpeting.

Sue, our 1970s carpet was actually multicolored, but it was all shades of green and "avocado green" was one of the shades. It was a medium pile, so it never had to be "raked." My aunt had a long shag rug, and she had the "carpet rake" for it.

The indoor-outdoor type of carpeting sounds better, for kitchens and maybe even bathrooms. At least, it seems like it would be easier to clean.

And I know what that is like, having to be careful not to step on, or trip over cats! They can be "stealth," and completely surprise you at times!

Burnt orange carpet, to go with the gold butterfly wallpaper.

Melissa, that sounds like perfect-70s! Was the wallpaper flocked?

We had regular wallpaper on EVERY wall of our little house, while I was growing up. (Except our basement which was paneled.) My rich friends had flocked foil wallpaper.

I should clarify, my first childhood home had zero wallpaper...our 2nd home was 100% wallpaper (and some short shag carpet).