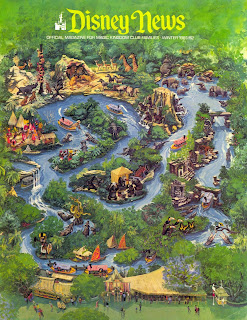 .
Prior to 1995, the boats used to enter the jungle at the start of the cruise, and then veer to the right just a bit in order to view three Toucans sitting in a tree. As the boats would pass, these three birds would turn their heads back and forth.
. 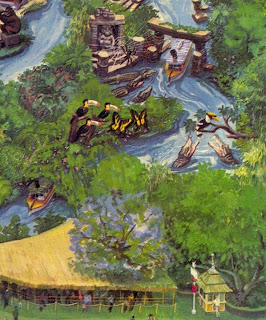 .
Next, heading just a little further west, the boats would encounter three small crocodiles jumping at a Hornbill bird sitting on a branch just out of their reach.
. 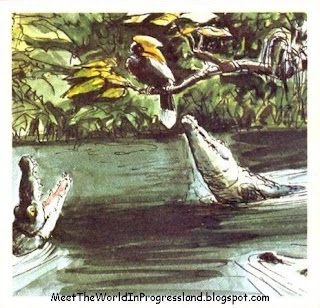 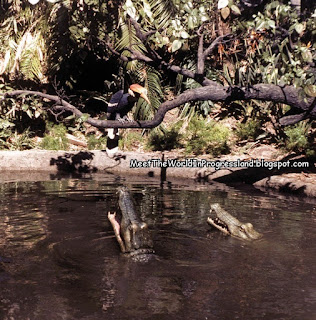 .
After this scene, the boats would pass the familiar Cambodian ruins and then continue on to follow the same route as they do today. In 1994/1995 however, these first two scenes were removed and replaced with an entrance way and queue for the new Indiana Jones Adventure. At that time, the Hornbill bird from the second scene was relocated to a beam above the queue in the new boathouse (just above the stairs that lead to the second level). Fourteen years have now passed, and this little audio-animatronic bird continues to flap it's wings, turn it's head and squawk at the guests below.
. .
Both of these "lost" scenes actually still exist at Tokyo Disneyland. The next three photos were taken earlier this year while riding on their Jungle Cruise attraction.
. 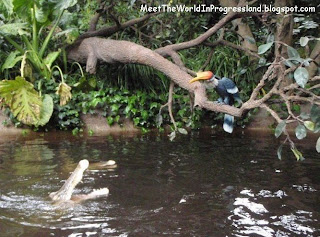 .
Sorry for the blurry photos.....sometimes it's difficult taking a picture from a moving boat! This next one is really bad, but I wanted to post it because it shows the third crocodile.
. 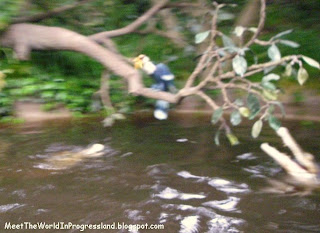 .
Here's a close-up shot of their Toucans.
. 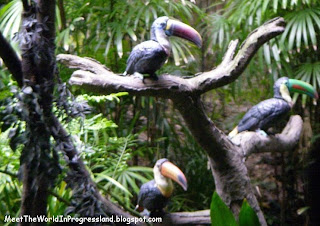 .
I hope everyone enjoyed this little flashback post. The next time you're in line for the Jungle Cruise (even if the upstairs queue isn't open), look straight up as you pass by the stairway and say "hi" to a surviving member of the "lost" Jungle Cruise.
Posted by TokyoMagic! at 11:33 PM

Thanks Chris - I've noticed (and photographed) the Toucan many times, but never knew his origin!

"There are three Toucans - that makes a six pack!". That line always stuck in my head!

Thanks Major, I had forgotten all about that line!