What Were They Thinking? - Light Magic at Disneyland


Well, it's April Fool's Day and unlike some of my past April Fool's Day posts, this one is not a joke. It is however, something that some of us WISH had been a joke....or just a bad dream! 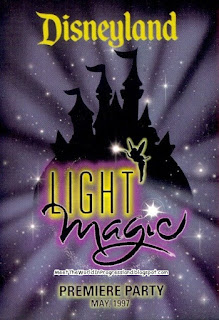 "Light Magic" was the highly touted replacement for the beloved Main Street Electrical Parade at Disneyland. It started being "pushed" on us during the "Farewell Performances" of the Electrical Parade in 1996, when a special announcement right before every parade performance told us to, "Open the window to your dreams and see your wishes come true, when Light Magic makes it's journey to Disneyland in 1997. It's an exciting new street spectacular that will illuminate the night in the Magic Kingdom. We hope you will join us when the Light Magic celebration begins in 1997."

These fiber optic signs were posted above both train tunnels on Main Street during the farewell season of the Main Street Electrical Parade: 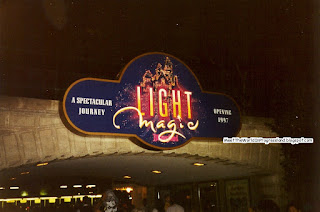 And then there was this sign hanging on the fence next to the exit of the Disneyland parking lot: 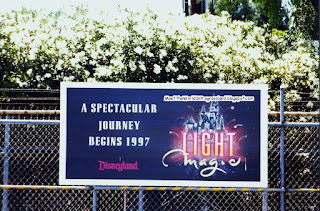 Light Magic-related construction began in early 1997 along the Small World Mall area. This nice, wide open view of the It's A Small World facade was eventually blocked by permanent lighting and sound towers that were erected for the new parade. Note the former Motor Boat Cruise lagoon (drained) on the far right. 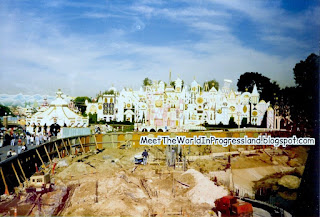 A construction wall went up blocking off the entire roadway except for a narrow path on the far left, leading to Toontown. 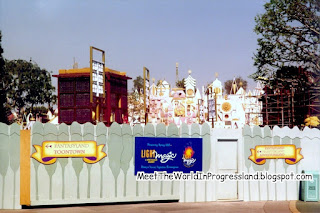 And yet another sign, trying desperately to get people excited for the "spectacular journey" that was coming. 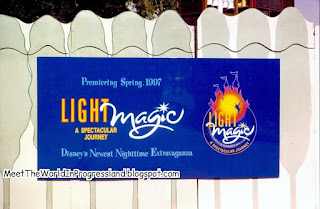 I guess this artwork on the construction wall was a little touch of foreshadowing. Pixies are coming to Disneyland! (An infestation of them!) 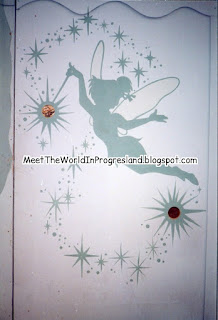 The section of the wall pictured above had two peek holes in it, but if you went a little further north, the wall ended and there were only tarps separating the guests from the construction. Below, is some video footage that I shot back in 1997 of the Small World Mall area under construction. In addition to the sound and light towers going up, a terraced viewing area on the east side of the parade route was being created and the souvenir stand/chalet over by the Matterhorn was also being built.

It's A Small World was closed, but guests could get a closer view of the construction from the Disneyland Railroad. 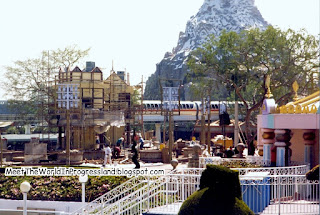 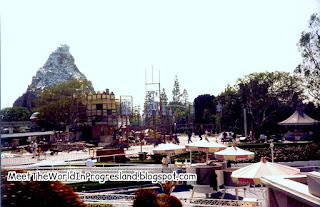 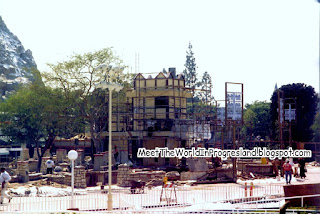 Eventually, the roadway was opened back up, but construction still continued in the area. The parade route that had previously consisted of slurry coated asphalt had been replaced with concrete to support the weight of the massive new parade units. 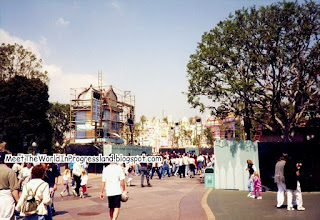 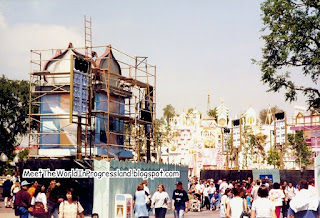 I hate to admit it, but we were actually suckered into paying $25 for an Annual Passholder "sneak preview" of Light Magic. This was the gate flyer being handed out that night. 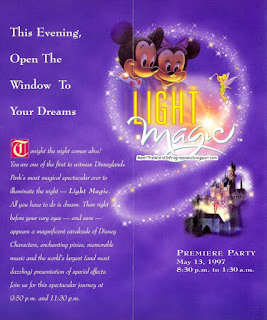 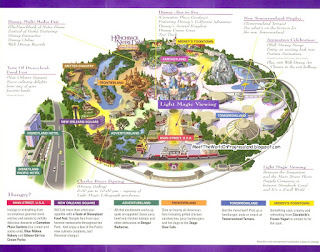 Also for that $25 price, we were "given" the opportunity to purchase "exclusive" merchandise in advance before the general public. I bought this "light-up" button BEFORE I actually saw the parade. 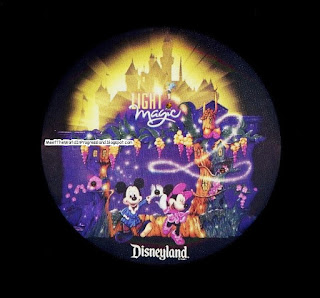 We had originally been very excited to see the new parade. After all, if they were getting rid of the Electrical Parade after 24 years, then this new parade must be something pretty incredible, right? WRONG! The parade was so inexplicably horrible. We were dumbfounded. How could anything so awful have been allowed to get past the concept stage and actually into the park? Who kept green-lighting it along the way? 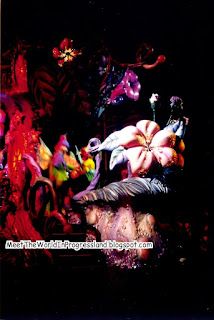 I should also mention that in addition to the parade being just plain bad, the performance that night was also delayed because of technical problems. We waited and waited for it to start, only to have Paul Pressler come out and announce that what we were about to see wasn't a sneak preview of the completed parade after all, but a "dress rehearsal" and as with most dress rehearsals, there may be some "glitches." After several long and painful "false starts", the parade finally began, but it continued to have problems including one of the projection screens not working. There were only two screens, so half of the people watching missed that part of the show. 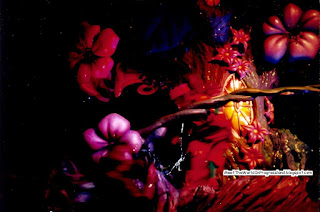 Well, after paying $25 just to see the parade before the general public, we felt like we had been majorly ripped off. I really wanted to go complain at City Hall, even though I had/have never gone in there to complain about anything in the park, no matter how warranted it might be. As we were walking through the park and heading towards the exit, we could hear everyone around us grumbling about how bad the parade was and how they couldn't believe that THAT was what was replacing the Electrical Parade! When we got to Town Square, we noticed a very long line out the doorway of City Hall and I thought, okay, I don't need to complain because there are plenty of other people doing it. Then, just as we were passing the front door, someone came running out waving money in their hand and announcing loudly "They're giving refunds.....CASH!!!!" We immediately got in line. The cast members were processing everyone through very quickly. They weren't even asking any questions, they were just handing money out to everyone in line.

To add insult to injury that night, guests were being given a sneak peek of the "New" Tomorrowland, which was under construction at the time. "Look, we're destroying Tomorrowland....get excited about it!"

The artwork below was on display in Tomorrowland and showed the layout of the upcoming Rocket Rods attraction. We all know the tragic ending that had, so I won't go into that here. Maybe that could be the subject of next year's April Fool's Day post! 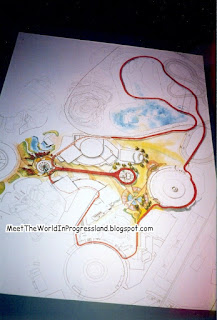 This was a model showing what the exterior mural of the Innoventions building was going to look like when finished. That mural was actually painted over just about a year ago when the "Star Wars Launch Bay" moved into the building. 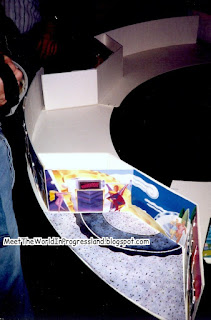 If you have stayed with me this far (thank you!), here is something morbidly fascinating that I captured on video. The footage below shows the Light Magic floats (or "rolling stages," as management preferred to call them) being driven through the park in broad daylight. Why is this being done did you ask? Well, it turns out that since the parade stopped for it's "street performances" in ONLY two places along the entire parade route, the walkways in those areas would be packed solid with people. And since the parade would begin up at It's A Small World, when it was finished performing back there, many of the guests that had just seen it would try to leave the park, only to get bogged down on Main St. where the parade was having it's second "show stop."

Management decided to remedy this, by having the parade start in Town Square. That way, it would be moving in the opposite direction of the guests that were trying to leave the park. Well, in order to do that, they had to get the floats/stages over to the parade start gate in Town Square. And rather than moving them in the early morning before the park opened, they did it in the late afternoon, just hours before the actual parade, and right in front of park guests! People would already be sitting along the parade route, saving a viewing spot for the parade. I remember cast members running around telling the confused guests that this wasn't the parade and that the actual parade would be in a few hours. Talk about "bad show." The whole thing was really quite unbelievable.

Light Magic ended up closing less than four months after it debuted. Park officials kept insisting that it would be reworked and return the following summer, but fortunately that did not happen!

If anyone is really curious and wants to check out some footage of the streetcrapular they called "Light Magic," here is a video. This isn't my footage, and I'm not even recommending that you watch it. I'm just including it here as a matter of convenience for anyone that did not catch it during it's short run and has nothing better to do with the next 20 minutes of their life. OR, you could just watch the first 30 seconds of the video, which includes the Light Magic television commercial, and be done with it after that!

When I started my blog nine years ago, I never in a million years thought that I would ever be doing a "Light Magic" post, but I had the photos, the videos, and the souvenirs, and thought it might be appropriate to post them all on April Fool's Day. So there you have it! And a happy April Fool's Day, to everyone!