Looking back on some of the toys and other items that I have saved from my childhood, I now realize that I had quite a few puzzles. Most of these were given to me as either birthday or Christmas gifts.

We'll start today, with some "Frame-Tray Puzzles" by Whitman. These were aimed at younger children and were supposed to help develop "coordination and motor control."

This Donald Duck puzzle is dated 1965, the same as the "Munsters" Frame-Tray Puzzle that I posted last year. 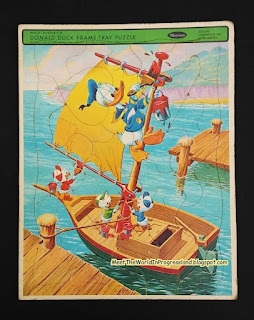 These children's puzzles would often have a few "special" shaped pieces. I'm not sure if that one piece on the upper right is supposed to be in the shape of a boat or a banana split. 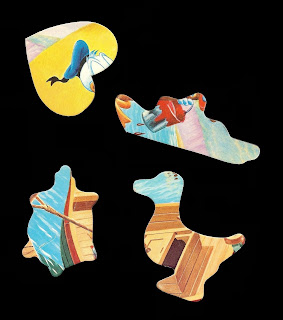 This "Jungle Book" puzzle is from 1967, the year the film was originally released. There is one piece missing in the upper left corner. It was very easy to lose pieces to these "tray" puzzles, since they did not come in a box, like most other puzzles. 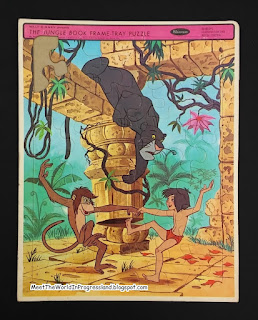 Unfortunately, this one is missing several pieces. This was one of my favorite puzzles when I was a kid....probably because it depicted a scene from Disneyland. 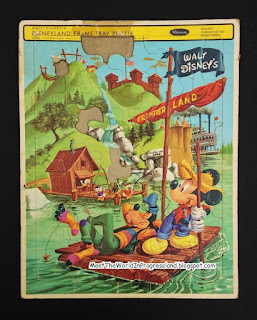 The following "boxed" puzzles all mention having 100 or more pieces, on their box lids.

This puzzle was manufactured by "Jaymar" and is titled, "Capt. Donald's Treasure." I remember this one being purchased at our local "Lucky's" supermarket, in the seventies. 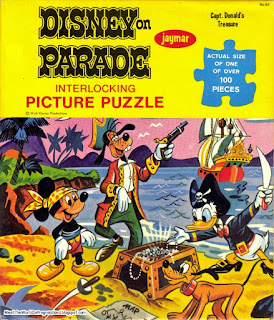 This Donald Duck puzzle was manufactured by Whitman, and bears the same "50 Happy Years" logo, as a Walt Disney World puzzle that I posted back in 2011. That logo was designed for the 50th anniversary of the Walt Disney Studios, which dates this puzzle back to 1973. 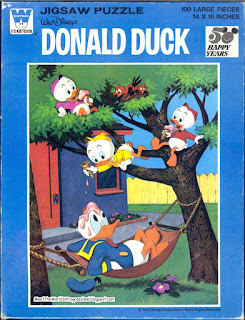 And here is that previously posted, Walt Disney World puzzle. 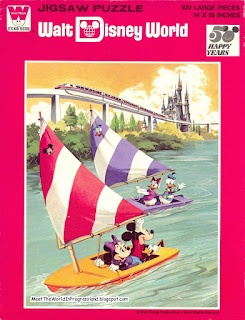 Here's another Jaymar puzzle, and this one still has it's "Lucky's" supermarket price tag of $1.27 on the side of the box! The artwork (titled, "Fishing") has always reminded me of the Jungle Cruise at Disneyland. 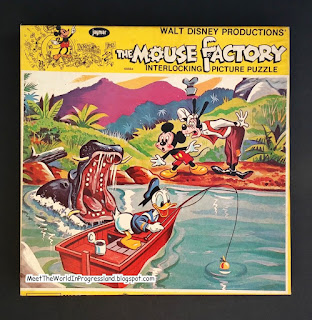 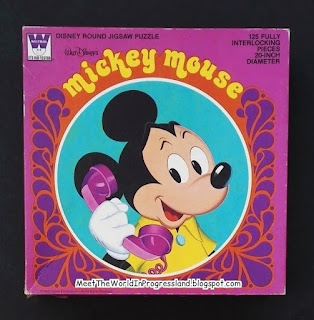 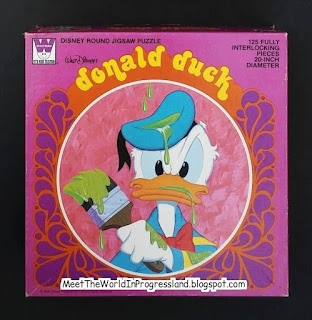 And here's yet another Jaymar puzzle. This one is titled, "Toyland." 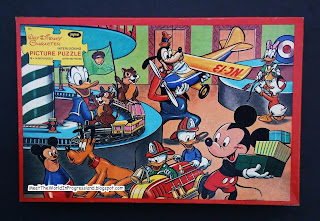 Most of the puzzle pieces were still assembled (in sections), inside the box, so I was able to put it together pretty quickly for a photo. 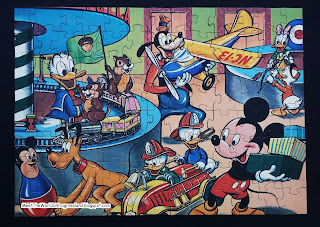 This puzzle was sold in 1976 (during our country's Bicentennial celebration), and was manufactured by Springbok, which was a division of Hallmark Cards Inc. The design was taken from the cover of a 1939 issue of Mickey Mouse Magazine. The artwork was also the inspiration for Disneyland's and Walt Disney World's "America On Parade" celebrations, which took place from 1975 through 1976. 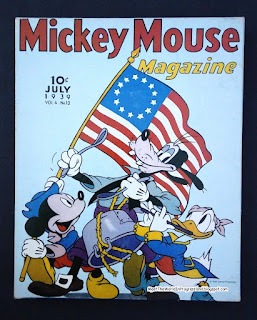 I posted this "mini" Whitman's Frame-Tray Puzzle back in July of 2010. This puzzle was designed for very young children and has only 12 pieces, while the one above contains almost 500 pieces! 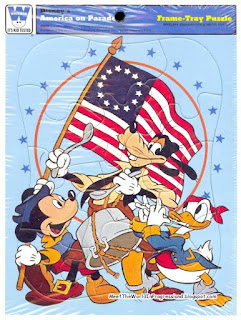 And here is the newest jigsaw puzzle in my collection. It was a personal souvenir from my visit to Walt Disney World, during it's 40th anniversary in 2011. Can someone tell me why Disneyland's 20,000 Leagues Under the Sea attraction poster, is included in the upper right corner of the puzzle? I know Walt Disney World's Magic Kingdom had a 20,000 Leagues Under the Sea "ride," but it was located in Fantasyland. Did the person who designed this puzzle, just make a mistake by using the poster from Disneyland's old Tomorrowland walk-thru exhibit? If so, that is kind of a big mistake! 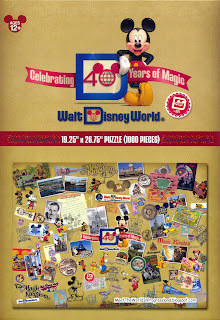 I thought I would include two more of the Whitman "Frame-Tray Puzzles" from my childhood, even though they are not Disney-related.

This Batman puzzle was actually my brother's, but we pretty much shared stuff like this. He is a few years older than me, and remembers the Batman TV series being on in "first run." I only remember when it was being repeated in "syndication." This puzzle is dated 1966, which is when the TV series debuted. 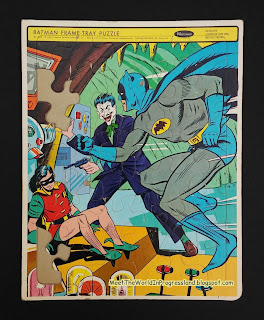 This Mighty Mouse puzzle is dated, 1969. By this time, the Whitman company had changed it's logo and added the line, "It's Kid Tested," to it's registered trademark. 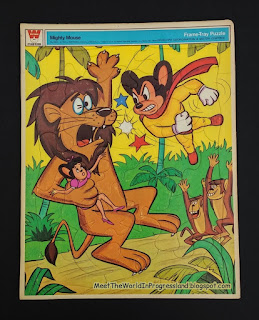 This was another puzzle, with "special" shaped pieces: 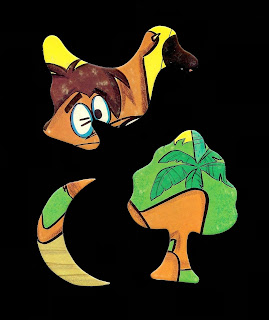 While scanning a childhood comic book for a future post, I came across this 1977 ad for Whitman jigsaw puzzles: 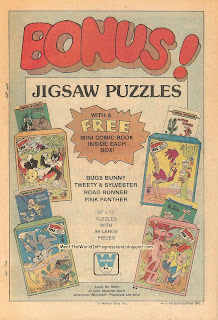 Blogger and "Meet The World" follower, "Andrew," of the "Bayern Kurve Blog," has generously shared a photo of a vintage Disneyland puzzle (manufactured by Jaymar), which he acquired at a flea market.  I really like the graphics on this one!  And boy, they sure did fit A LOT of the Disney characters into it.  There are five of them just in/on that one vehicle, alone!

Andrew pointed out that the title of this puzzle is "Tomorrowland," even though the artwork is depicting the Midget Autopia, which was located in Fantasyland.  He also mentioned that the puzzle no longer had the "Win A Trip To Disneyland" entry blank inside.  I happen to have a Mickey Mouse comic book, with that same contest logo on the cover, and the entry blank is still inside.  The date on my comic book is 1960, so I think we can assume that this puzzle would probably be from the same year.

Thank you so much for sharing this with us, Andrew! 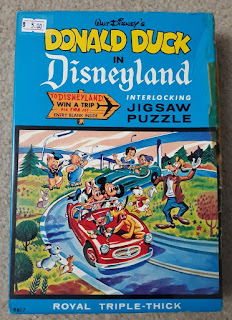