We will continue now with the next entry in my "Theme Park Stagecoaches" series. To see Part 1 in the series, click here: Disneyland's Stagecoach Attraction.

Today we are visiting Universal Studios. Universal used to have it's own stagecoach "attraction".....but it didn't go anywhere! 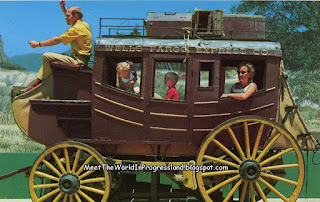 Universal's coach sat in front of a canvas backdrop with painted scenery on it. The canvas was stretched around rollers and it would move past the "riders", giving the appearance that they were going somewhere as the stagecoach bounced up and down. My dad took this next photo of my brother and my aunt riding inside the stagecoach (they're hiding!) in 1967. 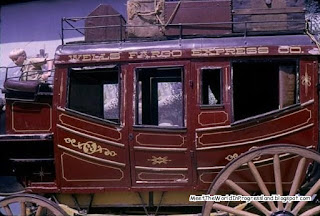 The stagecoach was located in what was then called, Prop Plaza. This was an area where the trams would stop halfway through the Studio Tour (the Studio Tour lasted several hours back then). Prop Plaza also included props that were used in both Universal movies and TV shows.

Note the control box and the sign on the wall just to the right of the stagecoach, in the picture below. The sign is washed out, but it reads, "CAUTION - Maximum Capacity 6 Persons - Use Quarters Only - Have Cameras Ready." 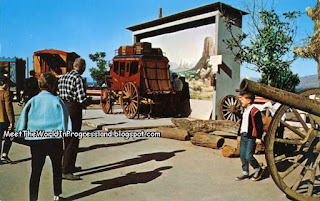 Here's a pic of the stagecoach with the canvas backdrop missing behind it. The jail cell on the right was a very popular photo-op at Universal for many years. 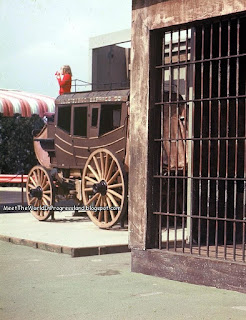 This picture is from a Universal Studios pictorial souvenir book. The top of the stagecoach definitely looks over capacity! 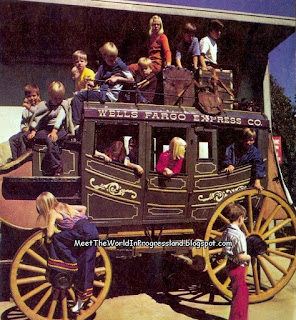 In this aerial shot from 1968, Prop Plaza (and the stagecoach) can be seen in the bottom left corner of the photo. 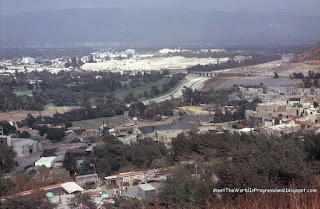 If we zoom in, we can see other props including some cannons and an airplane. Also visible out on the studio backlot is the steamboat used in the 1936 film Showboat (near the upper left corner of the pic), and the stone bridge used in the film, Sweet Charity (upper right corner). Just in front of that stone bridge, is the spot where the Parting of the Red Sea attraction would be added to the tram tour in 1973. 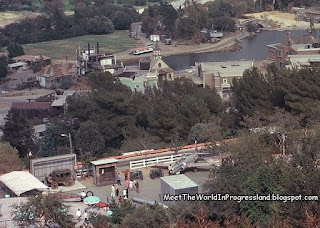 Here's another aerial shot (from 1967). The dining patio that was above Prop Plaza can be seen in the bottom of the photo. This stop in the tour was actually intended for guests to grab a bite to eat. They could then venture downstairs to the props and also to a tram loading area, where they could board another tram for the second half of the studio tour. 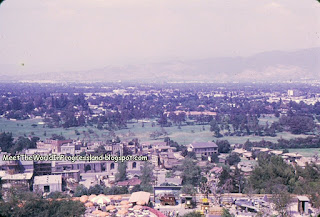 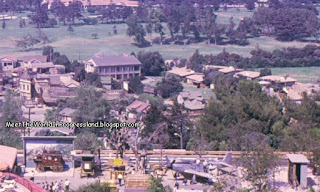 Prop Plaza also included an antique auto photo-op that was very similar to the stagecoach. This photo is used with permission from Major Pepperidge of Gorillas Don't Blog (thank you, Major!). In addition to bouncing up and down, it looks like the wheels on this vehicle actually spun around. I don't think the wheels on the stagecoach did that (but I'm not one-hundred percent sure). 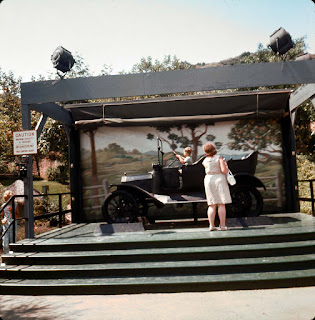 Prop Plaza stopped being a pit stop along the tram route many years ago, when the tram tour was reduced to just one hour. In 2003, I took my nephew to Universal Studios and was surprised to see the old stagecoach parked in the "upper lot", behind the arena of the former Western Stunt Show (across from Mel's Diner). There were steps behind it, still allowing for guests to climb inside and have their picture taken. The mural behind it was painted on a stationary wall, but it was reminiscent of the old moving backdrop. 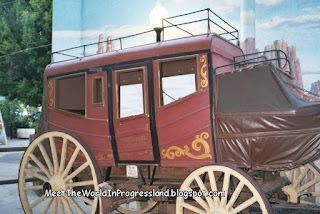 I went to Universal Studios again in 2012, and found the coach parked across from where the entrance to the Western Stunt Show used to be. By then, the stunt show arena had been completely removed. Why? I don't know. It hadn't been replaced with anything. Also, the coach was no longer open for guests to pose inside of it. Unfortunately, on my most recent visit to Universal, the coach was nowhere to be found. I hope they didn't toss it in the trash like they did with the old Glacier tunnel, and the Burning House, and the charred remains of Bob Gurr's King Kong animatronic. 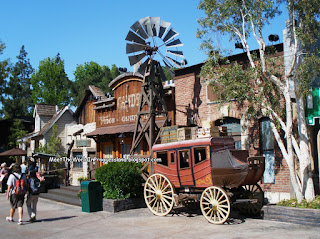 Universal has another prop stagecoach that kind of resembles Disneyland's old Mud Wagons (seen in Part 1 of this series). This coach is mounted above the seating area of the Saddle Ranch Chop House restaurant, located outside the entrance to Universal Studios. 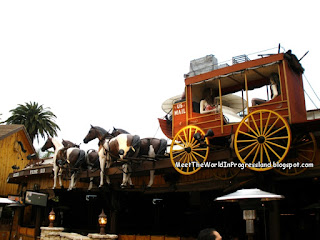 This restaurant has a long history of name changes. It originally opened in 1981 as Whomphopper's, then it became Tony Roma's, followed by Country Star Restaurant, and now it's the Saddle Ranch Chop House. 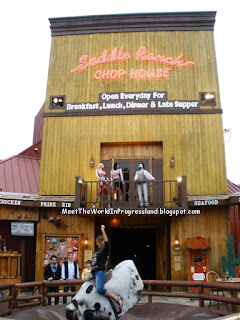 I will leave you today with this final vintage image of the old Prop Plaza Stagecoach, courtesy of "Matterhorn" (thank you!) from Stuff From The Park. 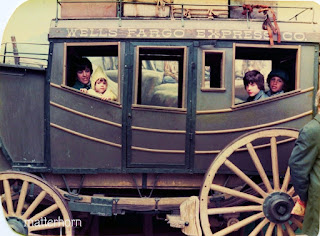 There will be one more part to this "Theme Park Stagecoaches" series. Stay tuned!

Meet The World reader/commenter "chebert813" spotted the Universal stagecoach just a few weeks ago, during a backlot tour of the studio and she has graciously shared her photo of it with us (thank you, again!) The stagecoach can currently be found parked alongside the Robertson Saloon in the Six Points/Western Streets section of the backlot. I'm so glad to see that this little piece of Universal history still exists! 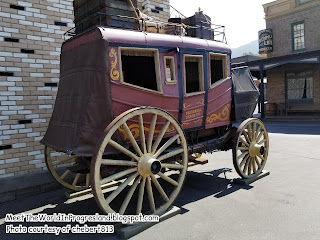