It's time for another Father's Day In The Parks post! Today's photos were all taken by my dad at various Southern California attractions, specifically in Long Beach and the "South Bay" area.

These first three were taken at the Queen Mary in Long Beach. The Queen Mary was a Cunard-White Star Lines ocean liner that began service in 1936. After being retired and sold to the City of Long Beach for $3.45 million, she departed South Hampton on October 31, 1967 and arrived in Long Beach on December 9, 1967. This first pic was taken in March of 1968, just a few months after her arrival. 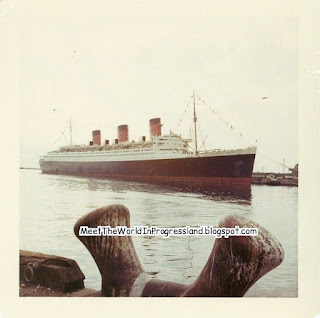 The next photo was taken five years later, in 1973. By this time, the ship had been operating as a tourist attraction for a couple years (since May 1971) and as a hotel for a year (since November 1972). In the background, we can see the Long Beach Convention Center. This was before it received it's massive wrap-around whale mural from the artist, "Wyland." 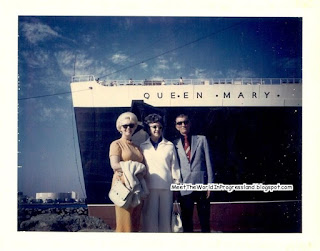 This shot was taken ten years later, in 1983. After the ship arrived in Long Beach, the ship's three smokestacks were taken off in order to remove equipment from the ship's front engine room and all of the boiler rooms. At that time, the smokestacks were discovered to be badly deteriorated, so they were replaced with replicas. 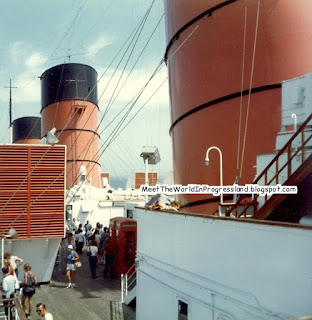 Now we're just a little further west, in the City of Torrance. "Rideland" was an amusement park that sat at the corner of Pacific Coast Highway and Ocean Avenue. It closed in the late sixties/early seventies. A McDonald's and a Taco Bell replaced the amusement park and are still standing today, although an "El Burrito Junior" has now moved into the old Taco Bell building. 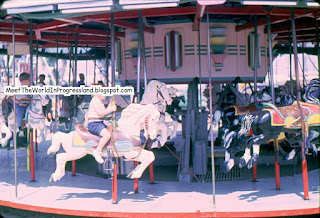 Being a lover of trees, I am happy to report that the tree across the street (Pacific Coast Highway) in the photo below, still exists! Today, it stands in front of the Pacific Ocean Center, a little shopping center that was built in 1966, just one year after these pictures were taken. 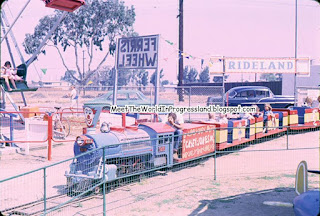 The little amusement park was just a few blocks from the Torrance Airport. The Goodyear Blimp had made it's home there back in the 1950's, and then again for a short time from 1967 to 1968, when it was then moved to it's current home alongside the 405 freeway in the City of Carson. It appears there was a fire burning in the distance, at the time my dad took this photo! 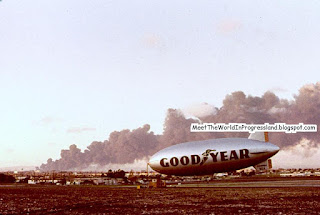 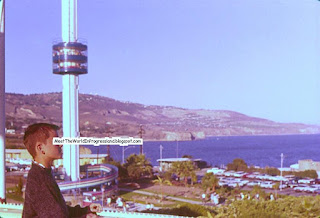 I know I mentioned this in one of my previous Marineland posts, but I'm going to mention it again! Sea World's owners bought Marineland in order to acquire it's killer whales (Orky and Corky) for their killer whale breeding program in San Diego.

When they purchased the park in December of 1986, they made a public statement saying that Marineland would remain open and that they were going to renovate it. However, soon after the purchase went through, they said that they were not going to keep it open after all, but they would keep it open through the Easter/Spring break, so that people would have one last chance to visit.

They ended up closing the park just before President's Weekend in February, more than two months earlier than they had announced. The animals were then packed up in trucks in the middle of the night, and relocated to Sea World in San Diego. Orky and Corky had actually been transferred, prior to the park's closing. Corky was pregnant at the time she was moved and shortly after she arrived at Sea World, she miscarried. Orky died the following year. The new owners also reportedly poured concrete into the drains at Marineland, so that the park could not be reopened. Such a sad ending to the park's 32-year history! 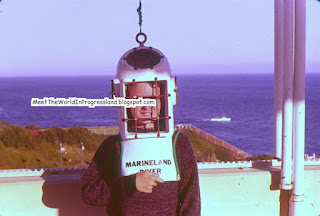 So as not to end on a sour note, here is one more pic from Marineland. I'm wondering if the trainer had a fish in his mouth here. I don't think I can see one, but it would make sense. Otherwise, I think he would have his hand out and not be bent over with his face so close to where the dolphin/porpoise was going to jump. And isn't the old "holding a fish in the mouth trick" something that they used to do back in the day, at marine parks? 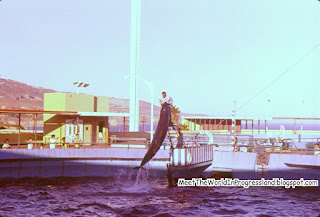 Happy Father's Day Weekend to all of the dads out there!