America The Beautiful was a 360 degree film that was presented at Disneyland, in Tomorrowland's Circle-Vision Theater. Over the years, there were several films with that same name that were shown, but the version that played the longest debuted in 1967, along with a whole new Tomorrowland. 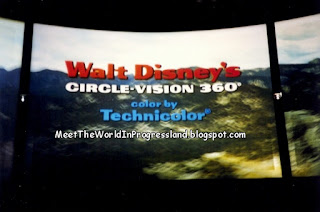 The film played at Disneyland for 17 years until it was eventually replaced by American Journeys and The Wonders of China in 1984. However, in the summer of 1996, America the Beautiful returned to Disneyland for a limited engagement that lasted into 1997. 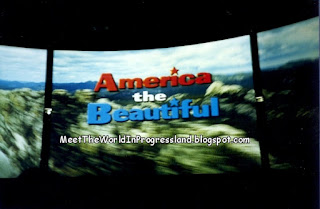 This was still a time before everyone was on the internet, so I didn't have any advanced notice about the film's return. I can still remember the excitement I felt back in 1996, when I first saw this new banner hanging over the entrance to the theater. The banner reads, "Celebrating 40 Years of Circle-Vision - The 1960's Classic - Walt Disney's America the Beautiful - Special Return Showing" 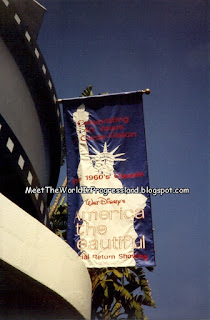 Let's go back now and take a look at the Circle-Vision theater building (and surrounding area), through a series of "then and now" photographs. This first photo was taken in 1983. It doesn't show the actual theater (which would be just to our left) but it does show what the costumes looked like for the hostesses working the attraction. 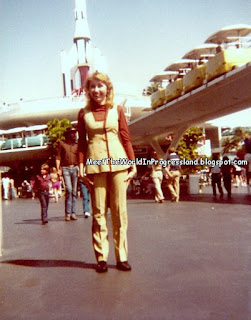 This next photo is from 1996 and was taken while standing just a little further west, allowing us to see a portion of the theater marquee. Note the two banners announcing the return of America the Beautiful. One of them is the Statue of Liberty banner that we saw above. We'll get a closer look at that red, white and blue one in just a minute. 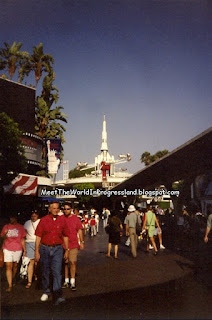 Not to depress anyone, but here are a couple "later" shots of the building taken from almost the same spot. The first one is from Wikipedia. I have very few of my own photos of the "Brown Tomorrowland of 1998" because I found it too repulsive to photograph. 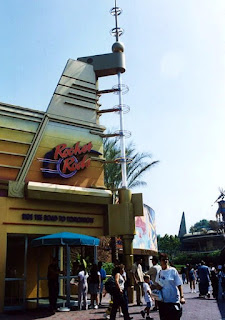 And this is the current view: 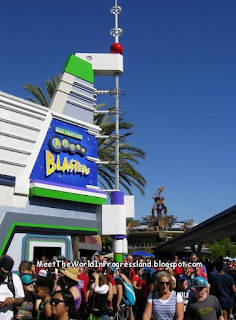 Next, we have some shots of the theater entrance that were taken while standing underneath the PeopleMover beam. This is from 1983: 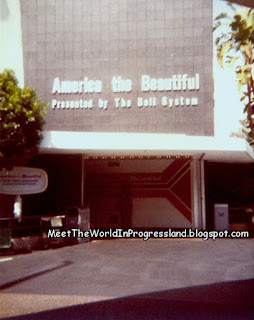 If we lighten the photo a little, we can see the design on the wall just inside the doorway a little better. 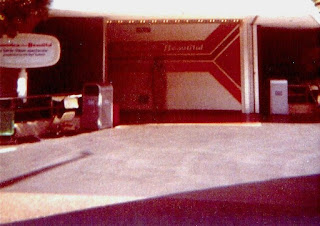 This is the same angle, from 1996. Note again, the two new banners. Also note the strips of metal that have been added to the marquee to cover up the former sponsor of the theater (Delta Airlines). 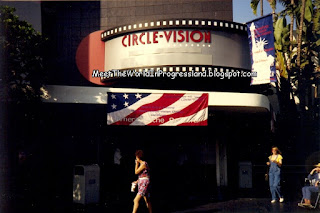 I don't need to lighten that photo to see the wall inside, because I took a close-up shot of it back in 1996. 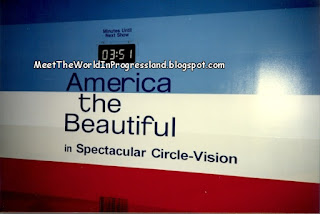 Once again, I don't want to bum anyone out, but this photo was taken from the same angle, so I'm including it here. I shot this one through a hole in one of the construction walls that were put up during the destruction of Tomorrowland in September of 1997. (The hole in the wall just happened to line up perfectly with the shot I had taken back in 1983. You can see just a smidgen of the PeopleMover beam in the upper right hand corner of both photos.) 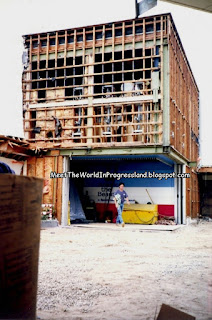 And the same view today: 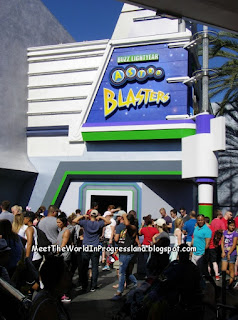 Going back to 1983, this close up shows the smaller sign that was tucked into a corner just to the left of the entrance. 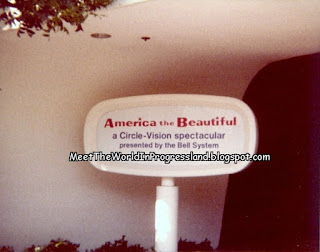 And here's the sign's replacement. This was taken in January of 1996, prior to the return of America the Beautiful. The Wonders of China would play in the theater first, from early morning until early afternoon. American Journeys was then shown the rest of the operating day. There was a short period of time in the middle of the day, that the theater would have to close in order to change the marquee and switch the reels of film on the projectors. 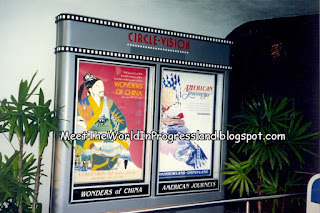 This is the same display case in July of 1996. The sign on the right mentions that America the Beautiful was the last Circle-Vision film personally supervised by Walt Disney. There is also a mention of the "next generation of Tomorrowland attractions". What a joke! The Circle-Vision theater didn't even get to remain as a stand-alone attraction in the new Tomorrowland of 1998. It was turned into a queue for an attraction that lasted only two and a half years! Argh! 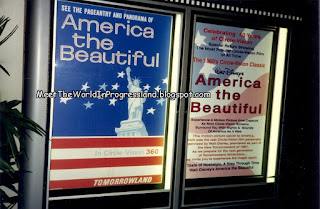 Now we will head inside the building. The waiting area had large square upholstered seats. Sometimes you would see guests sprawled across them taking a nap. In the photo below, they have been pushed together in groupings of two. The PeopleMover had not permanently closed at the time this interior shot was taken in 1995, but it's operation was "spotty". Here, we can see that there is one car lined up right behind another on the track. Also, if you look at the wall below the PeopleMover track, you can just make out a world map. This photo goes back to when Delta Airlines was still a sponsor of the theater. 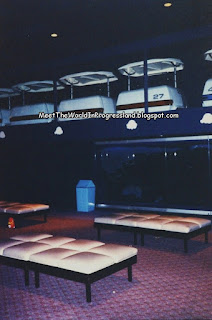 I'm including this next pic just for fun. If you look carefully in the photo above, there is an upside down popcorn box under one of the seats (far left and in the back). This isn't THAT exact popcorn box from the photo (I don't usually pick up trash off of the ground), but it is one just like it that I had saved from back then. 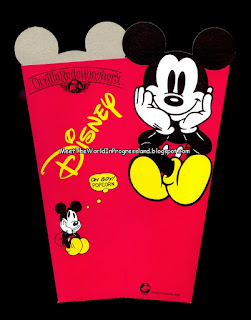 This photo shows what the pre-show area looked like during the time that America the Beautiful was having it's special return showing. The state flags were a little reminiscent of the way the room was decorated back in the early days of the Circle-Vision Theater. Too bad they didn't replicate the modern flags that used to hang from the ceiling. 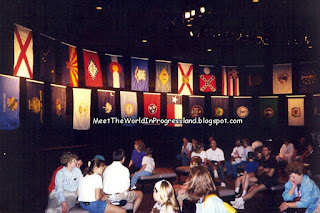 Now let's go inside the theater and watch America The Beautiful. I've posted two links below. I shot this footage in 1996, during the film's return engagement to Disneyland. This first link includes the building's exterior and also the pre-show ("Hey everyone....at the count of three, shout out what state or country you are from!").

This second link is for a video of the actual film, in it's entirety.

I do have footage of both American Journeys and The Wonders of China that I will post in the future, if anyone is interested.

****POST UPDATE****
I have now posted footage for both American Journeys and The Wonders of China. That footage can be viewed here: Circle-Vision at Disneyland.