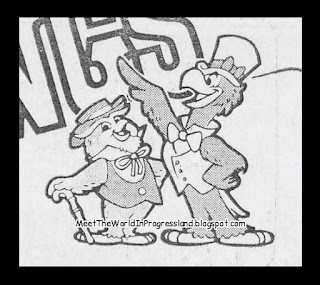 Last month, I posted a 1974 newspaper ad for Disneyland's newest attraction, America Sings. Here is the reverse side of that advertisement. It just happens to have another Disneyland ad on the other side of it. Note that the park hours were until 1 a.m. everyday during the summer. I remember when they used to be open that late! I don't have an exact date for this advertisement, but since the theater ad above it states that the play, Mack & Mabel ends August 17th, this ad had to be dated some time before that, but after June 29th when America Sings opened to the public.

That artwork from 1974 was used again three years later, in a color ad from 1977. This is a page from the February 1977 issue of the Auto Club News. Gee, during the month of March, it was only $6.00 for admission and unlimited rides with your Auto Club card. It costs three times that much now....just to park your car! Sheeeesh! 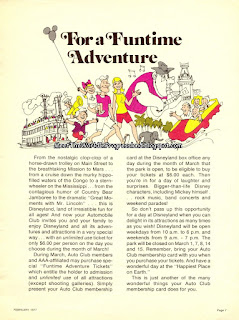 Here's the cover of that magazine: 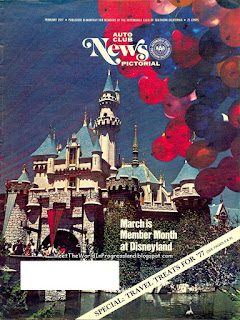 And just to compare what prices were five years later, here is a page from another issue of Auto Club News. This one is dated February 1982 and shows that the prices for Auto Club members during "Auto Club Month at Disneyland" had only gone up $2.25 in five years.....not bad! And just look at those hours. Closed Mondays and Tuesdays and open only until 7:00 p.m. on the weekends. I liked Disneyland better when it had an "Off Season"! 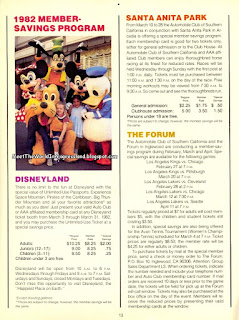 Here is the cover of that issue. Sorry about the waviness at the top of the scan! I scanned this about seven years ago and then put the magazine away without noticing that it was a bad scan. 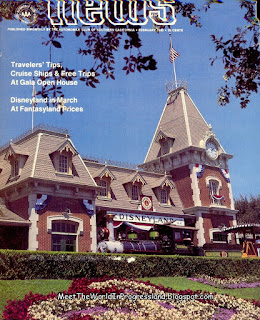 Does anyone know if Disneyland even has an "Auto Club Month" anymore? It would be so nice to pay a discounted price of say, maybe $103 for the day instead of that dreaded $105! ;-)