In honor of today being the 48th anniversary of Disneyland's Haunted Mansion, I am posting another Haunted Mansion-related item from my childhood. This is the box for one of four models from a series that came out in 1974. 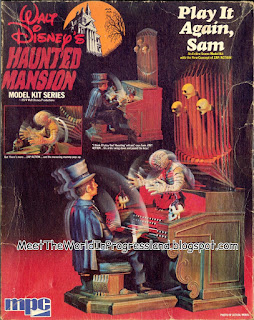 This one is called, "Play It Again, Sam." Incidentally, that line is a misquote from the film "Casablanca." Humphrey Bogart never said "again", he just said "Play it, Sam!" Ahhh, but I digress! I saved this box, but I'm not sure if I still have the model or not. I want to say that I did save it and that it is in my mom's garage. I guess I will say that.

Hey, what's up with that mummy coming out of the organ? A mummy is only seen in the graveyard section of the Haunted Mansion attraction!

This side panel explains, "Zap/Action!" There was a series of Pirates of the Caribbean models made by the same company, that also had "Zap/Action!"

I also had the "Escape From The Crypt" model, but I know for sure that I didn't save that one. The box may still exist, but I haven't seen it for years. Now I'm thinking if I had saved the box, it probably would have been kept together with this one.

I think it's odd that there weren't more of the ACTUAL scenes from the attraction that were recreated for this series. The vampire scene is especially annoying!

I really should have looked to see if I could find this model, but I know if it does still exist, that it will have a horrible paint job! As a kid, I wasn't very good with a paint brush. Wait, I'm still not!