This month marks the 10th Anniversary of my blog! Can I count it as ten years, even if I didn't post anything in 2014? Oh heck...I'm still counting it, since I did begin posting way back in July of 2008!

For this major milestone (for me, anyway!), we're going to take another look at Disneyland's 25th Anniversary celebration from 1980. This large paper sculpture of the Castle was used on the cover of the Spring 1980 issue of Disney News Magazine, and was also on display all year long in the window between Coke Corner and the Candy Palace on Main Street. 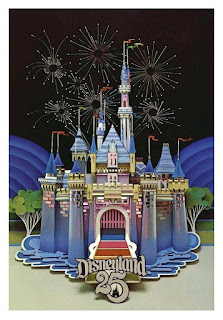 Unlike Disneyland's milestone anniversaries of recent years, the 25th anniversary festivities (as well as the 30th, the 35th and the 40th anniversaries), began in January and ran only until November, when the park's Christmas decorations would go up and the holiday entertainment would begin. (In comparison, the 50th and the 60th celebrations didn't start until May of their respective years and the "60th" celebration was actually dragged out, way past the 61st anniversary!)

Early in the year, Disney aired a television special to let the public know that the park was celebrating it's first quarter century. The special was titled, Kraft Salutes Disneyland's 25th Anniversary. Let's take a look at the listing for that television special, from the March 1st issue of TV Guide. 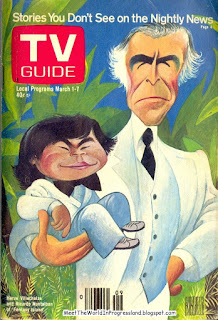 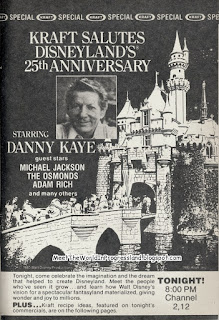 The show was sponsored by Kraft and the TV Guide featured some Kraft recipes themed to Disneyland. (Most of these recipes were republished in the January 16, 1982 issue of TV Guide for the airing of Walt Disney World's 10th Anniversary special.) 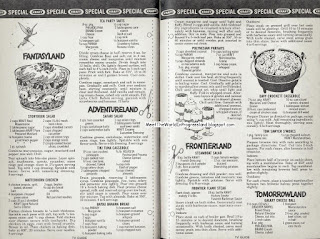 Oops! Somebody used a depiction of Cinderella's Castle from Walt Disney World in the "Close Up" feature, below. And FYI, Mork and Mindy and the Australian soap opera, Prisoner: Cell Block H were both in their second seasons, and Buck Rogers in the 25th Century was in it's first season. 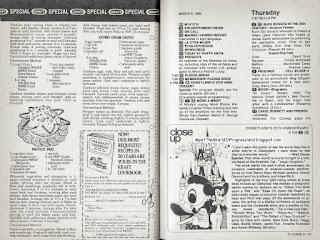 Going back earlier in the week to Sunday night, here's the listing for Disney's Wonderful World. The 1965 Disney classic, The Monkey's Uncle, starring Tommy Kirk and Annette Funicello (she's mad about his chimpanzee!) was being shown. Note the top hits of 1979 that were being "counted down" on Solid Gold! 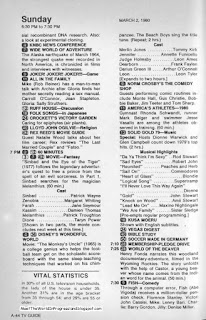 And for anyone that might be interested in what was going on in the "non-Disney" world of television at this time, here are some more listings from that same issue of TV Guide:

Pink Lady and Jeff was a variety show starring comedian Jeff Altman and Japanese recording duo, "Pink Lady" (Mitsuyo "Mie" Nemoto and Keiko "Kei" Masuda). Only five shows aired of the six that were filmed. Rhino released all six episodes on DVD back in 2001, but it is now out of print and I am still looking for a copy that is reasonably priced! 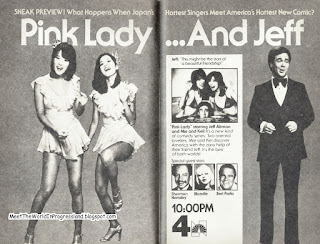 Remember when The Wizard of Oz was shown on broadcast television every year in the Spring? 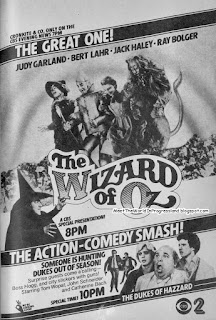 Polly Holliday, who played Flo ("Kiss my grits!") on the sitcom, Alice, had left the show to do her own spinoff series and Diane Ladd was being added as "Belle," the new waitress. Diane Ladd had actually played the part of Flo in the 1974 film that the series was based on, Alice Doesn't Live Here Anymore. 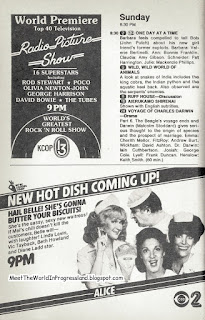 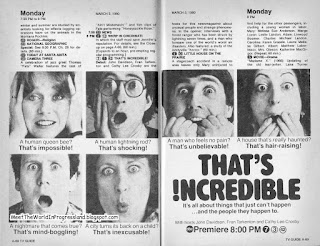 This week's episode of Eight is Enough included drama for Abby, who was played by the incomparable Betty Buckley. (Trust me, Tom! You can trust me!) 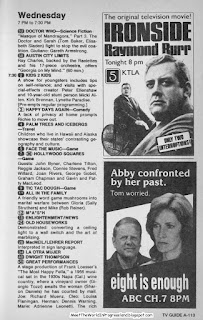 There was also drama in store for Karen (Michelle Lee), on Knots Landing. 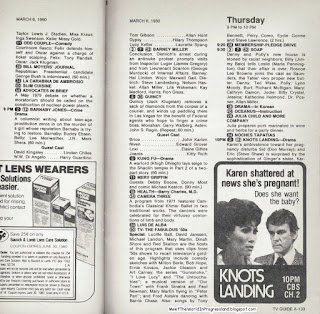 Match Game is still one of my all-time favorite game shows! I remember my great-grandmother not liking Gene Rayburn for some reason, even though she did watch the show regularly. Watching repeats of it today on the Buzzr Channel, I do see that he acted a little "dirty old man-ish" at times. 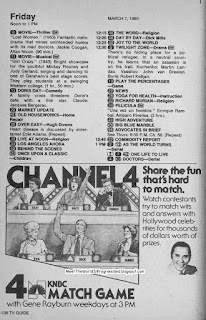 Posters of your favorite celebrities could be ordered through the ad below. I wonder how many young people out there, have no clue as to who these celebrities are. "Who is S. Anton? And what is a B.J. and the Bear?" 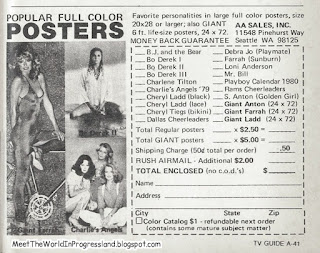 Incidentally, that cover artwork for this issue was drawn by famed caricaturist, Al Hirschfeld, and depicts Herve Villechaize and Ricardo Montalban from the TV show, Fantasy Island. Here is the cover-story article. 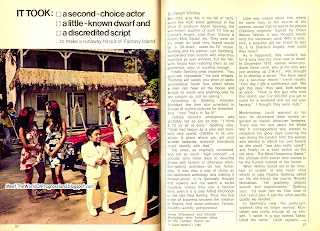 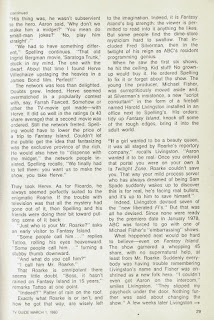 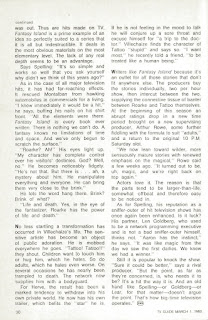 And if anyone is interested in watching the Kraft Salutes Disneyland's 25th Anniversary special, here it is in it's entirety.

By the way, I had been looking for the park's 25th Anniversary television commercial on YouTube for many years and found it only recently. Unfortunately, this particular version of the commercial does not include the full song, due to the announcer speaking through part of it. But hey, I'll take whatever I can get!

I'll end this post with the cover of Television Times (the Los Angeles Times' version of TV Guide) from that same week. 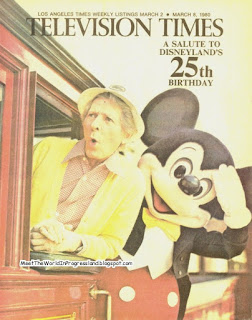 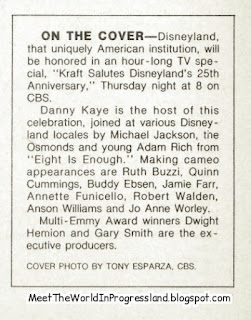