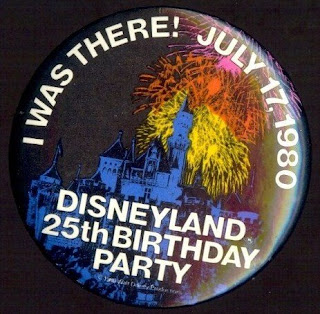 .
Twenty nine years ago, Disneyland held a 25 hour party for their 25th Birthday. Upon entering the park, guests attending the party received the button picutred above. . Tickets for the party could be ordered through the mail using the Mickey-shaped form in the advertisement below. The newspaper ad is from the Los Angeles Times and it is dated June 22, 1980. 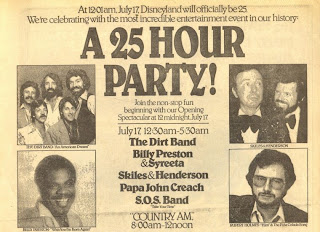 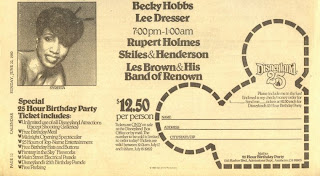 Once again, my scanner is not large enough to scan pages out of the newspaper and this ad was a full page, so I've had to split it in half. Syreeta was performing! So were Skiles and Henderson. They already had an intersting past history with Disneyland that dated all the way back to 1956! To read more about their Disneyland career, click here: Skiles and Henderson.

.
To see the actual tickets, entertainment program and a birthday hat from from the 25 hour party, go to Vintage Disneyland Tickets' recent post by clicking here: Disneyland's 25th Anniversary. .

I don't have a date for the following newspaper article, but it obviously ran within days of the 25 hour party.

.
Hey Vintage Disneyland Tickets, I wonder where ticket number one is today?

I've heard people debate as to when the actual anniversary date falls since Disneyland was open only to invited guests on the 17th and open to the general public for the first time on the 18th. I say.....who cares! CELEBRATE it whichever day you wish. Personally, I'll be at the park CELEBRATING today! . HAPPY BIRTHDAY DISNEYLAND!!!! .
Posted by TokyoMagic! at 12:01 AM

Ticket number one is kept at the archives in a small, Lucite brick. Though generally not on display, it is often brought out for visiting groups to show what kind of items are kept there.

Hope you had a great time today; unfortunately, I had to get back to work! Argh!

Ryan, thank you for the information!

Dave, sorry I missed you!

Great meeting both of you yesterday, lets plan it again when we can all stay longer!