Well, it's been six years since I've done one of these Father's Day posts. Where does six years go? I don't even know where the last year went! And by the way....this is my 400th post! Okay, here we go. Today's photos were all taken by my dad at various tourist attractions throughout Southern California.

First up, we have Universal Studios. The first pic was taken in 1988 during the the tram tour of the studio backlot. This was the "Burning House." According to "thestudiotour.com," it was originally located adjacent to the Universal Amphitheater. It was moved to the location below in 1982, but was eventually demolished to make way for the Jurassic Park ride and a new fire station. (And that website didn't miss pointing out the irony there!) 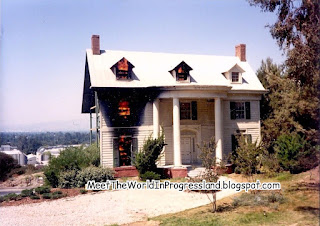 The next pic was taken in the early 1970's. This was Universal's "Wild West Stunt Show." Note the man that is horizontal in mid-air to the right of the light blue building. Also note the two men lying on the floor of the arena in front of the Silver Slipper Saloon. According to "thestudiotour.com," the stunt show was only in this location from 1970-1972 and at the end of that period, this arena was expanded and turned into the Universal Amphitheater (which originally was an outdoor venue). At that time, the stunt show was moved to another location in the upper lot, where it would stay until closing permanently in 2002. 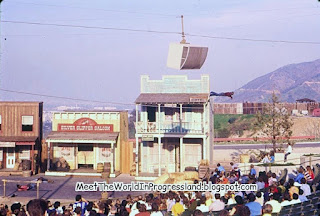 This shot from 1990 shows the western stunt show in it's upper lot location, just after it had received a renovation and a name change to "The Riot Act Stunt Show." The renovation included a new collapsing facade on one of the buildings. During the show, a stuntman would sit on a crate in the middle of the arena, while an explosion would cause the front of the building behind him to fall forward. One of the windows would line up perfectly so the building would fall down "around him"....which is what had happened just seconds before my dad took this picture. 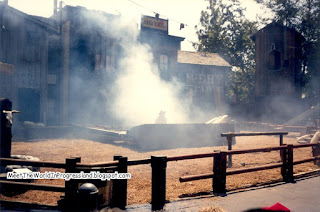 Our next stop is at Knott's Berry Farm. This first photo was taken in 1974 at Knott's Lagoon, which was located across the street from the main theme park. The locomotive was one of the many miniature trains manufactured by Bud Hurlbut. This one is reportedly in a private collection today, but Bud's miniature train from the original Santa's Village (in Sky Forest, CA) can be found today at the Santa Ana Zoo in Santa Ana, California. And another one can be found at Castle Park (formerly owned by Bud Hurlbut) in Riverside, CA. 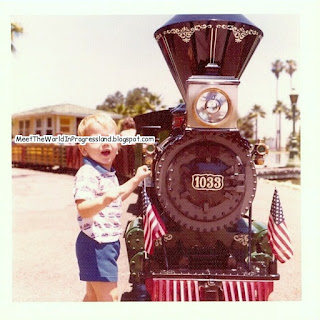 In this shot from 1966, Chief White Eagle places a feather headdress on a guest in Ghost Town. The Old Knife Shop which used to be located just south of the Miner's Bank, can be seen in the background. 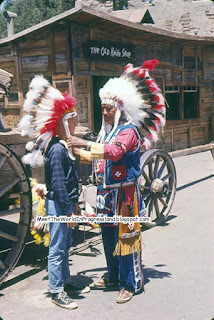 This Polaroid is from the mid-1970's and was taken on the front porch of the Gold Trails Hotel in Ghost Town. In the early 1940's, Walter Knott acquired pieces of an old hotel in Prescott, Arizona (including the two doors in the background) and used them on what would be one of the very first Ghost Town buildings at the Farm. The hotel housed the Covered Wagon Show which told the story of his mother's and his grandmother's journey out west in a covered wagon. Unfortunately, the show was removed and the hotel was torn down. A recreation of the hotel stands in the same spot today with the show being replaced by a souvenir shop.

I'm pretty sure that the musician on the left is "Fiddlin'" Charlie Ware. And I believe the guitarist's name is "Mamie," but I don't have a last name for her. If anyone knows, please feel free to chime in below in the comment section! 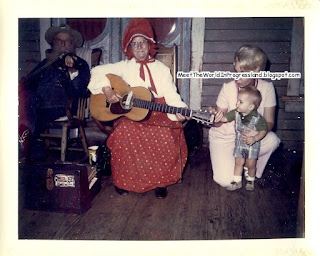 Last up we have three shots from Disneyland. All of the photos feature characters that we don't see walking around the park anymore. The first one is of Br'er Bear, who could often be seen in New Orleans Square, along with his pal, Br'er Fox. The photo was taken in 1982. 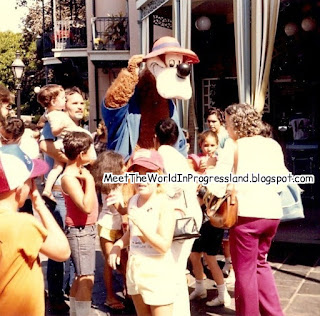 Baloo and Mowgli from The Jungle Book could often be seen hanging out (usually with King Louie) in or around Adventureland. This shot is also from 1982. 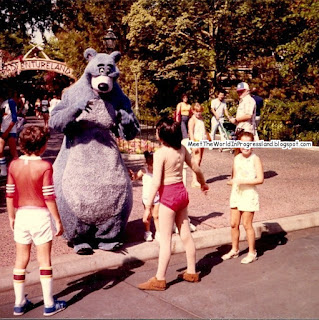 And this final pic of Snow White, Dopey and Sneezy(?) in front of Tomorrowland, is from April of 1971. Snow White can still be seen greeting guests in the park today, but it is rare to see any of the Seven Dwarfs unless it is in a parade or show. 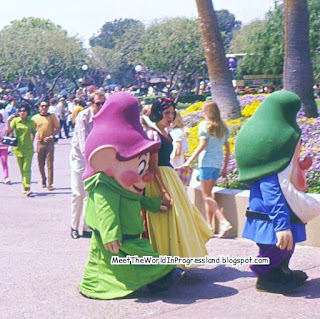 I hope everyone enjoyed this little trip through some of Southern California's theme parks. And an early "Happy Father's Day" to all of the dads out there!

(***BONUS!!! I happen to have three vintage Disneyland postcards, featuring the same characters seen above, so I am including them below.) 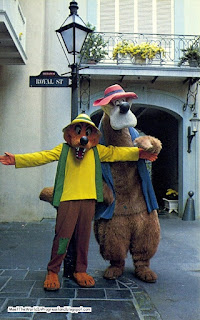 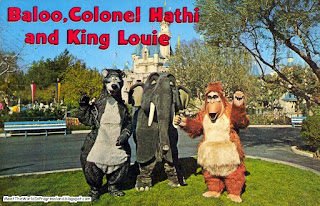 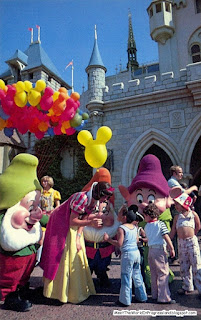