I'm starting a new series of posts themed around "Places I've Never Been" and Lion Country Safari happens to be one of those places! When I was a kid, my family went to Disneyland, Knott's Berry Farm and Universal Studios a lot. We even went to the smaller parks, like Japanese Village & Deer Park (in Buena Park) and Busch Gardens (in Van Nuys), but I think Lion Country Safari in Irvine was just far enough away from where we lived in L.A. County, that it wasn't on my parents' radar. 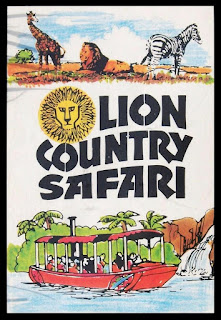 The original Lion Country Safari in Loxahatchee, Florida (near West Palm Beach) opened in 1967 and is still in operation today. It's success spawned five more parks across the country, with the Southern California version opening in 1970 and closing in 1984. The other four parks, which were in Grand Prairie, Texas; Stockbridge, Georgia; Mason, Ohio and Doswell, Virginia, have all closed as well.

I picked up this brochure for the California location when I was a kid, and I've kept it all these years.

I do remember hearing that the animals were never out in the numbers that were shown in television commercials, or in promotional photos like these. I also remember people saying that most of the animals were asleep when they went. Maybe someone out there can tell me what their experience of visiting the park was like! 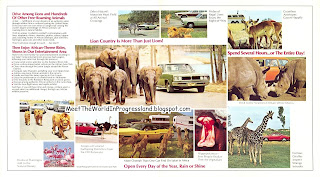 Sleeping animals or not, I always wanted to go for the rides....even though they didn't appear to have very many. In my child's mind, it looked like they had their own versions of the Disneyland train, Motor Boat Cruise, Autopia, and Jungle Cruise. 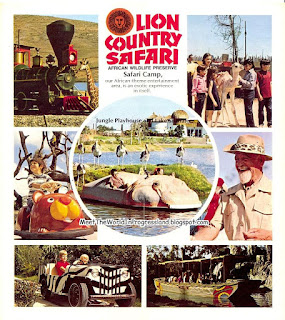 Well, even though I never got the chance to see Lion Country Safari for myself, some of my family members did go in June of 1976, so I'm including the photos that were taken during their visit.

Apparently, the park offered rides on baby elephants. I hope this is something that would not be allowed today....at least not in the U.S. 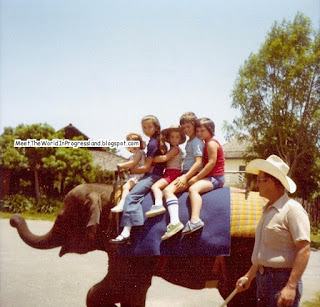 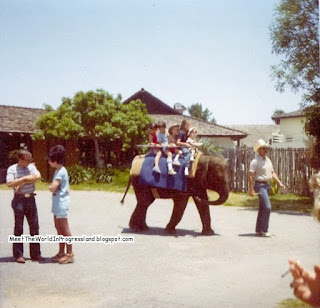 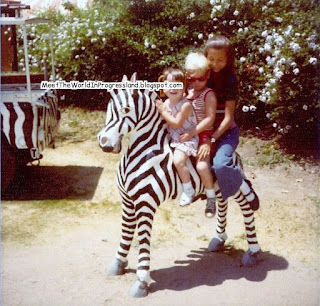 Hippo-shaped pedal boats! I wonder what happened to Lion Country Safari's rides after the park closed? I hope that at least the train was saved and went on to have a second life. 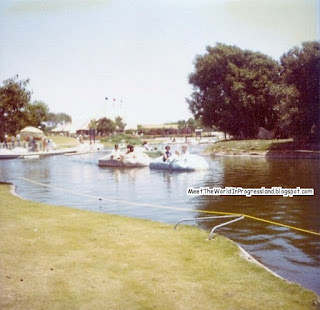 This smaller flyer appears to be from a bit later than the first brochure. It shows a one dollar increase in adult prices and mentions that Lion Country Safari is "Freeway Close To Everything.....a Gas Savings Convenience!" which would probably date this from the mid-1970's when the country was experiencing an "energy crisis." 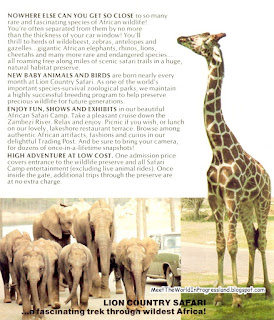 Convertibles and pets are not permitted in the park! That's nice that they provided free kennel service for pets. And even though the park itself didn't move, the back of this flyer now lists the park's address as Laguna Hills instead of Irvine. That reminds me of when the Matterhorn at Disneyland "moved" from Tomorrowland to Fantasyland!

Of all the animals that resided at Lion Country Safari over the years, two of them became somewhat famous. Frasier the Lion was a "star attraction" at the park back in it's heyday. Frasier was already a geriatric kitty cat when the park acquired him from a Mexican circus in 1970 and he only lived a couple more years after that, but he sired more than 30 lion cubs during his time at Lion Country Safari! This 1972 photo of Frasier and his "family" is from the Los Angeles Times. 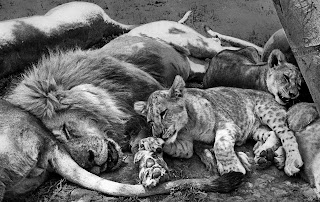 Frasier was even the subject of a motion picture in 1973, Frasier the Sensous Lion. A stand-in lion was actually used for Frasier. 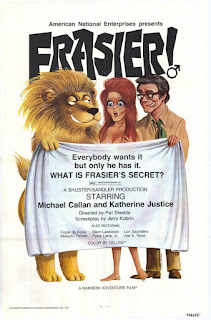 Bubbles was an eight year-old hippo that became headline news after she escaped from the park in 1978 and roamed around free for almost 3 weeks. (I actually just heard Richard Dawson make a "Bubbles" reference on Match Game '78, on the Buzzr Channel last night.) Unfortunately, her story ended more tragically than Frasier's, and can be read about here if anyone is interested: Bubbles the Hippo. This 1978 photo of Bubbles and her daughter is from the Los Angeles Times. 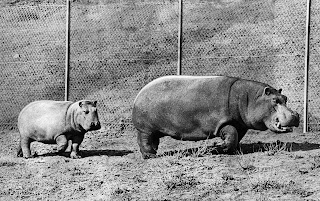 I remember reading articles about the death of both of the animals and sharing the one about Frasier during "current events" at school. I wish I had saved those articles. I saved a lot of newspaper clippings from childhood, but unfortunately the obituaries for the two Lion Country Safari residents are long gone.

The death knell for Lion Country Safari itself, came when the park went bankrupt and closed permanently in 1984. Wild Rivers waterpark was built on the site two years later. Wild Rivers closed in 2011 and the Los Olivos Apartment Village sits on most of the property today. (In 1981, the Irvine Meadows Amphitheater was built on a portion of Lion Country Safari's land but it was torn down in November of 2016 and will be replaced with more apartments.) 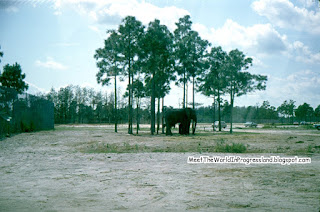 Note the hood of the car and the side-view mirror in the next two pics: 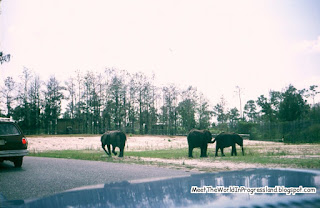 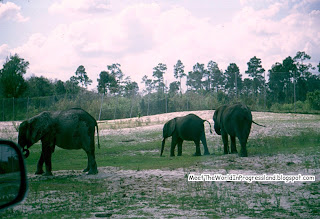 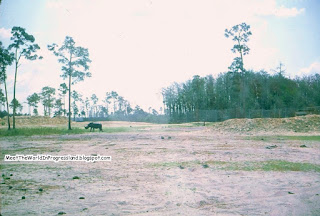 The color on most of these had turned. I tried to correct them the best that I could, but I don't have Photoshop. I do realize that there is too much green in most of them. I was tempted to just convert them all to black and white! 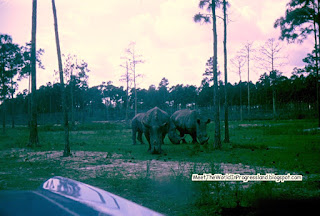 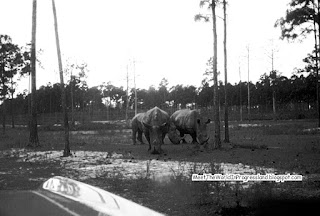 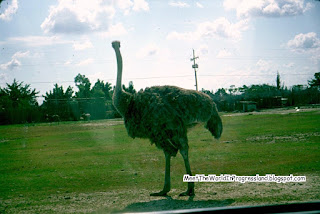 I'm not sure what kind of animal this is. It looks a little bit like a deer. Maybe it's an antelope? 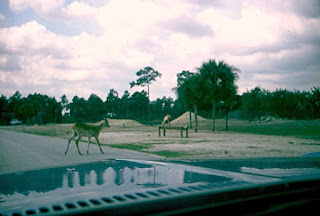 And now we get to the animals, for which the park is named after: 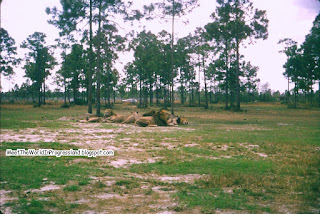 I'm guessing that tire was thrown out there for the lions to play with, or maybe it was used as a scratching post? I suppose it could be all that's left of some visitors and their car after breaking down out there! 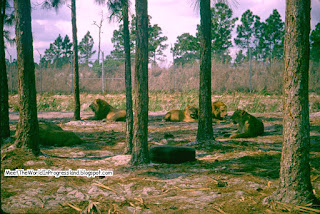 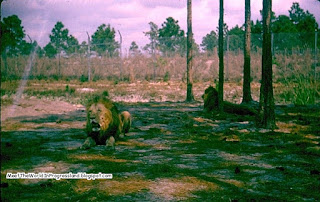 Just like the park in California, the original had an amusement area adjacent to the drive-thru section and included animal shows, bird feeding pavilions and a few rides. Today that area is called Safari World and includes a small water park. I believe this first pic was taken at the entrance to the park. I'm basing that off of the current park map, but these pics are 42 years old, so a lot could have changed since then. If anyone knows for sure, please chime in below in the comments! 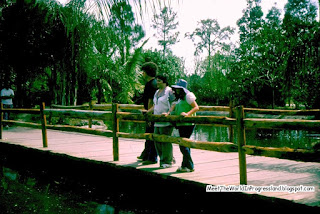 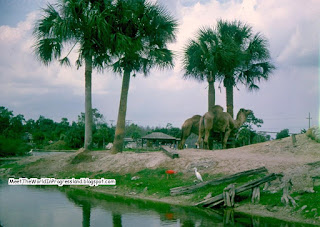 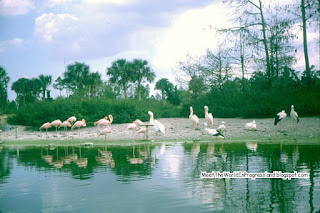 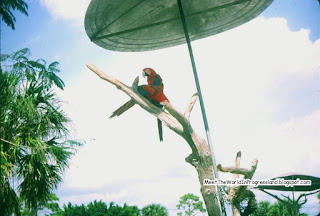 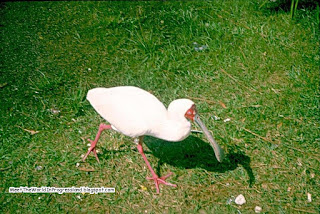 I hope everyone enjoyed this 1970's visit to two of the five Lion Country Safari parks! I'm going to end this post with a clip from an episode of The Simpsons, when they go to a fictional park called, "Discount Lion Safari." The episode is titled, "Old Money" and is from Season 2 of the show. It's kind of a sad episode, but this two and a half minute clip only includes the part where the family goes to the drive-thru safari park: