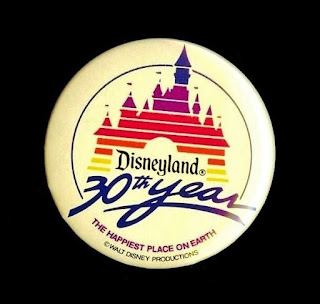 Picture it.....February, 1985.  I was leaving for Hawaii in just a few weeks, and I was determined to take some decent photographs on that upcoming vacation. For quite some time, I had not been very happy with the Disneyland photos I had been taking, with my brother's Kodak Instamatic camera and it's "110" film. (We have seen some of those pics posted here, in the past.) I really wanted to buy an "automatic" 35mm camera that would do everything for me, just like the ones I had seen Bruce Jenner and Cheryl Tiegs advertise on TV.

I went to a store called "Consumers," which was similar to Service Merchandise or Jewelcor, if anyone remembers those stores. They would only have one of each item out on display, and if you were going to purchase something, they would have to go bring it out from the stockroom.

The camera that I ended up purchasing, was the 35M Cannon "Sure Shot" with auto focus. 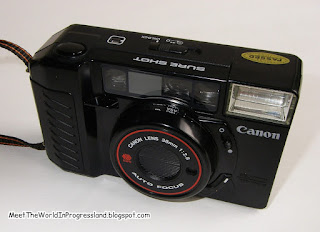 Here is the cover of the camera's instruction manual: 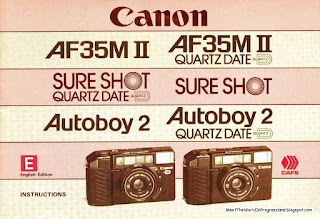 I found the original store receipt, tucked inside the manual! 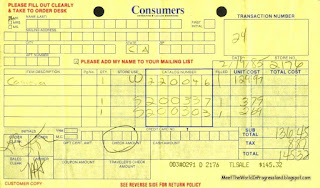 So, now I had a brand new 35mm automatic camera. I was very excited and I wanted to try out all of it's features right away, so the very next day, I went to Disneyland!

The park had already begun it's year-long 30th anniversary celebration.  This first shot that I took, shows one of the 30th anniversary "tents," which were set up in front of the ticket booths. Below them, various GM cars were out on display. The promotion for the 30th anniversary was "It's our birthday, but you get the gifts." That year, they were giving away a GM car to every 30,000th guest who walked through the gates.

Notice the old Disneyland parking lot in the background. And is that a boat strapped to the roof of a van on the left? It looks like something is also strapped to the van on the right, but I can't make out what it is. The Grand Hotel can also be seen in the distance. That hotel was eventually imploded and I believe that site is now a parking lot for Disney cast members. 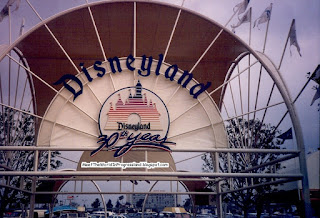 The "Gift Giver Extraordinaire" machine had been installed at the park's entrance. It kept track of the number of guests passing through the turnstiles. For every 30th guest that passed through, an alarm went off and a light bulb lit up at that particular turnstile. The guest was then awarded a prize. As I mentioned above, some of those prizes were cars. We'll see some of the other prizes in just a minute. 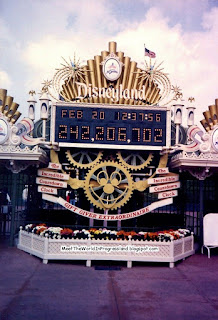 The turnstiles also produced a ticket for each and every guest, letting them know what number guest they were, and whether or not they had won a prize. This was my ticket for the day, which reads, "Sorry No Win."  It was also letting me know that I was the park's 242,206,833rd guest!

This was the Disneyland Guidebook for that day: 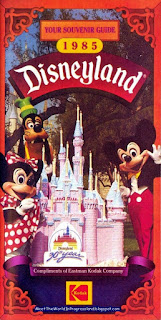 I don't seem to have an entertainment guide from that same day, but here is one from about a month later: 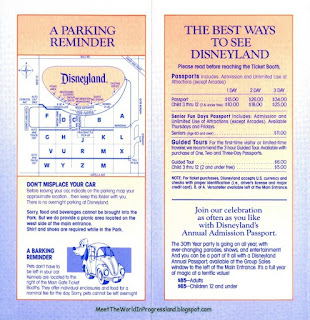 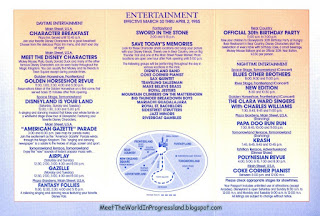 And here is a list of the various prizes, which were awarded to guests: 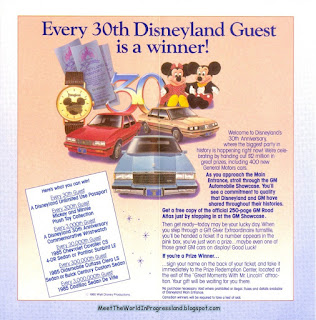 This is the button which was included in the "Birthday Party" price of $2.50.  It was exclusive to the guests who paid for the birthday party package. The button shown at the very beginning of this post, was smaller in diameter and could be purchased in various souvenir shops throughout the park. 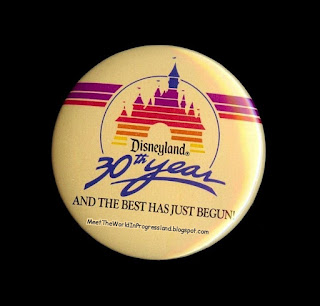 I just had to take a picture of the train engineer, since he was so friendly and waving to us from up above. I'm glad that the Global Van Lines lockers building can be seen through the archway, because I don't have any other personal photos of it. I have never liked the building/facade that replaced it. In my opinion, it never matched the rest of the architecture on Main St. It's really too bad they didn't just leave the facade of that original building, when they expanded the Emporium into that space. 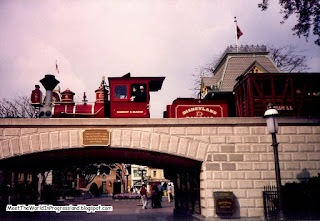 I climbed the steps up to the train station, to get this pic of Town Square with the Castle in the distance. Of course, if you try to "center" the photo, then the flag pole will block the Castle, so you have to step to one side. Notice the special signage and bunting on the lampposts. This was for the park's "Salute to American Heroes" promotion. Each sign had a different hero on it. The one closest to us and on the right, is John F. Kennedy.  The one on the left is, Ronald Reagan.  To see close-up shots of these signs, taken just about two weeks later, check out this post from Major Pepperidge and "Lou and Sue," over at Gorillas Don't Blog. 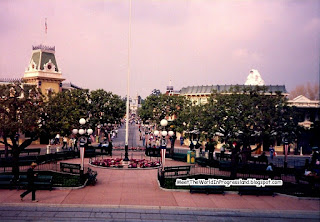 Back in the day, the free Disneyland guidebooks would state that "It's A Small World" was the only attraction, where flash photography was allowed. We went on the attraction that day, so I could test out the camera's built-in flash. 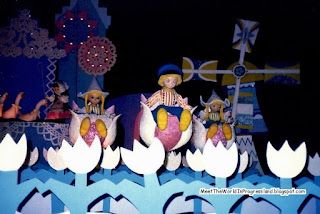 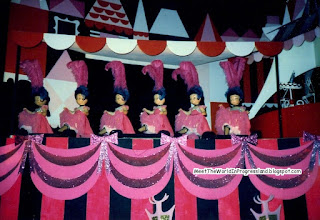 Two years earlier (in 1983), while the "New Fantasyland" was still under construction, many of the Tomorrowland cast members were telling us that Tomorrowland was going to be the next "land" to be completely remodeled. Because of this, I decided that I better start documenting it on film. That is the reason for this shot of the Mission To Mars facade. I probably should have waited for that PeopleMover vehicle in the distance, to come a little closer! 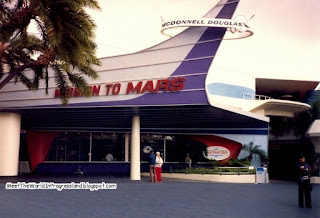 Even though plans were obviously changed, and Tomorrowland did not get remodeled for many more years, Adventure Thru Inner Space was rumored to be closing at the end of the year, for a brand new attraction. For this reason, I tried (in vain) to capture several of the scenes within the ride.

This first one didn't turn out too bad, I guess. The only thing missing here, is the projection of the smaller snowflake, rotating in the center of the larger three-dimensional snowflake. The projection ended up being "washed out" by the camera's flash. I know, I know....that's what I get for using a flash inside the attraction! 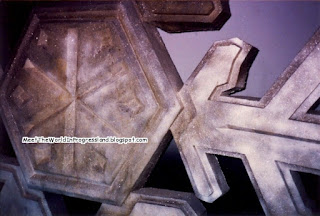 I also tried to capture the wall of "vibrating" water molecules; "What are these strange spheres? Have I reached the universe of the molecule? Yes, these are water molecules, H2O! They vibrate in such an orderly pattern, because this is water, frozen into the solid state of matter!"

The molecules in this part of the ride, were behind a two-way mirror (and I believe they were also in front of another mirror, which helped create the effect that they went on forever). Unfortunately, the bright camera flash was reflected back in the mirror. I know, I know......don't say it! But at least one of the molecules showed up in the photo (upper left corner). 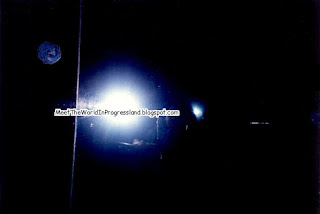 This is the part of the ride when the vehicles, or "atomobiles," would pass by the eyepiece of the microscope and riders would see a giant eyeball looking back at them. As the eye shifted back and forth, riders would hear the narrator state, "There is no cause for alarm! You are back on visual and returning to your normal size!" I LOVED everything about this attraction, but the giant eyeball was my favorite part! Unfortunately, the flash from the camera reflected on the piece of glass in front of the eye and blocked out most of it. I know.....I KNOW! 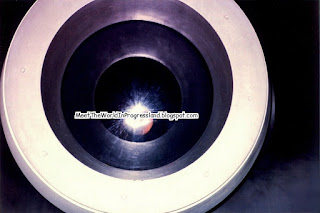 I took this pic of the Atomobiles in the unloading room, just as a PeopleMover car was passing by. The hourglass-shaped structure on the other side of the Atomobiles, was at one time, a giant floor-to-ceiling "rain lamp." Rather than try to give my own description of what a "rain lamp" is, here's the definition from Wiktionary: "A type of lamp, popular in the late 1960s and early 1970s, that moves droplets of water or oil along filaments, to create the illusion of falling rain." Disney turned off the oil on their lamp, sometime in the 1970s. 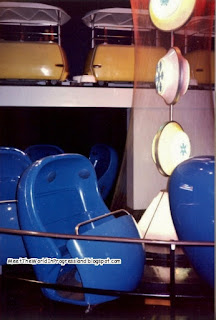 That's it for the photos I took that day. Well, actually, I placed the camera on top of a trash can, in order to test the automatic timer. It worked and I got a decent photo of myself and a friend, but there wasn't anything very interesting in the background. And since I would have to place white ovals over our faces, I decided to leave that one out!

As an added bonus, here is the GM flyer, which was being handed out at that General Motors car display, in front of the park: 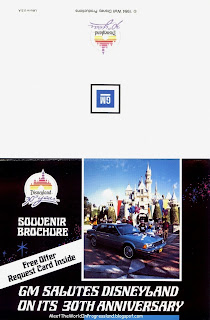 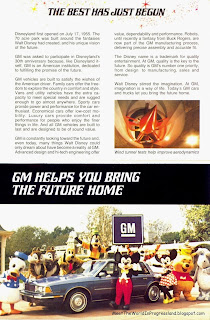 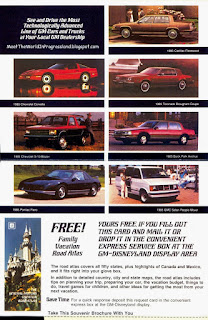 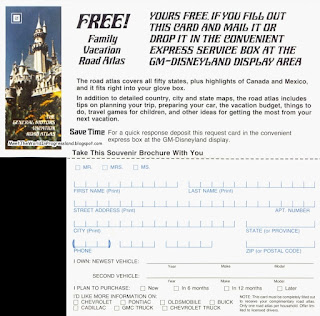 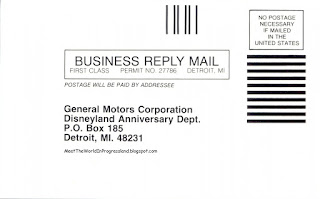 And one last item.....in addition to the prizes awarded to every 30th guest, all winners were given one of these buttons: 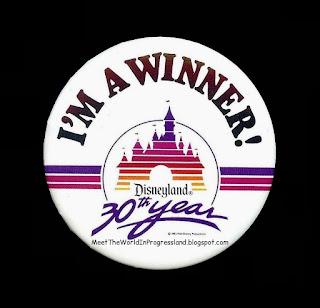 I hope everyone enjoyed this trip back to 1985!