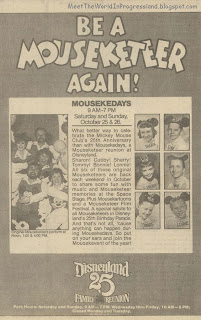 . I thought I might stay with Disneyland's 25th Birthday celebration a little longer. This is an ad from October of 1980. The year long birthday festivities at Disneyland were winding down and would be over by the time the Christmas season began. The Mouseketeers were appearing at Disneyland that October and November, and they were celebrating their 25th Anniversary as well. There was even a special "Wonderful World of Disney" episode earlier that year that served as a Mouseketeer reunion/anniversary show. If anyone's interested, here's what's on the reverse side of the clipping....the "backside of a Disneyland ad," so to speak. 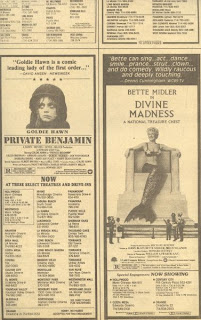 . Here's a little something relating to the Mouseketeers. I don't have a date for this short article, but from what I remember, it's from sometime in the nineties. It seems about right since it mentions "those once adorable, now 50-something, Moseketeers....." I believe most were right around 10 years old when they were on the show, give or take a few years. . 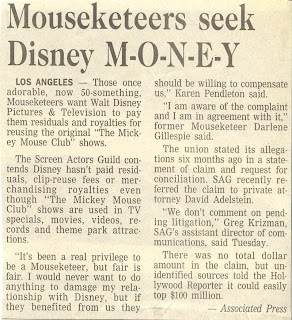 . Meanwhile, back to Disneyland and the year 1980....I did go see the Mouseketeers when they were performing at the park that year. I have some photos of them on the Space Mt. Stage and I will include them in my next post! .
Posted by TokyoMagic! at 3:58 PM