Disney On Parade was a traveling arena show that performed around the world back in the 1970's (1969 - 1974). There were 4 different editions of the show with a new one being created roughly each year. The first edition premiered in December of 1969 and ran through 1970. These arena shows were the forerunner to the "Disney On Ice" shows which began in 1981 and are still running today.

My family went to see the first edition of Disney On Parade at the Anaheim Convention Center, in August of 1970. This is the souvenir program from that show. 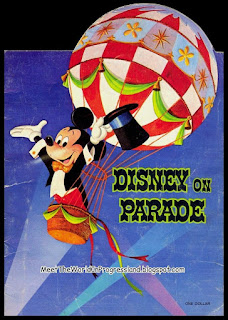 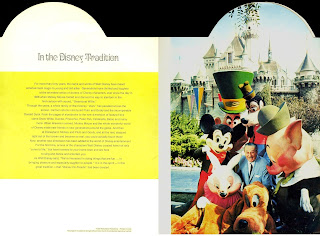 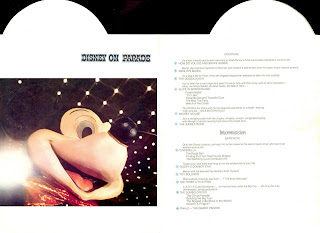 The show opened with the curtain going up and a cast of Disney characters running out across the arena floor and into the audience. During this opening segment, the song "How Do You Do And Shake Hands" from Alice In Wonderland was playing. 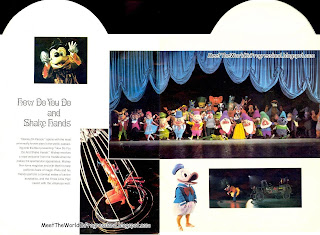 My dad took a few Polaroid shots during the show and captured the characters running across the floor of the Convention Center. 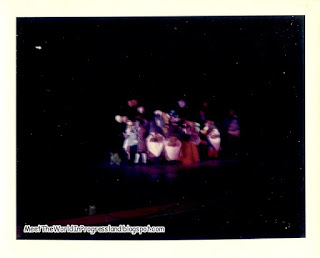 Here, Gideon from Pinocchio greets guests in the front row. Pinocchio himself can also be seen going up the aisle in the background. 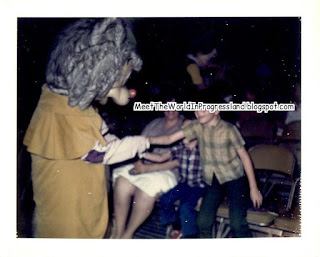 After the "meet 'n greet" with the characters, Mickey performed some magic tricks while dressed as the Sorcerer's Apprentice and Pluto outsmarted a Dog Catcher with the help of some live canines.

Prior to each major act, footage from it's corresponding movie was shown on a screen above the stage. I think this was done not only as an introduction to the next act, but also to give the stage hands time to prepare the sets. The lights would go down for the movie footage, and when they came back up, the sets would already be out on the arena floor and the action would begin. As a small child, the whole thing was kind of like a magic trick. "Look over here at the shiny object" Then POOF! The sets appeared! 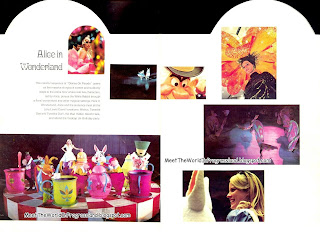 The Alice In Wonderland segment was very elaborate. The tea party table (above) came apart in sections and moved around on the floor individually.....sort of like Disneyland's Tencennial birthday cake!

My dad took a pic of the "off model" White Rabbit. He looks like Thumper here. It's interesting that the White Rabbit costume didn't match the one that was being used in Disneyland at the time, and neither one of them was really spot on for the character in the movie. Disney finally got the look of the costume right, but it was decades later. 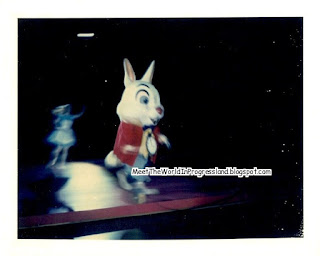 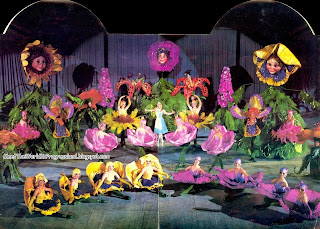 The Jungle Book segment was another very elaborate act. 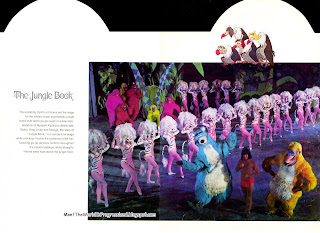 At one point, the act went psychedelic with multi-colored flashing lights and "catwomen" go-go girls. 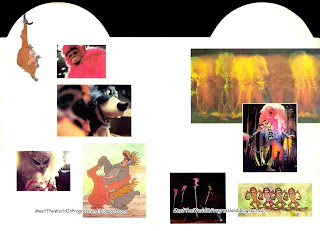 This photo isn't so great, but I'm including here it anyway. You can just make out some of the go-go girls in the background. 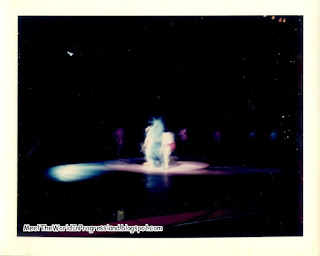 After Intermission, the show started back up with Cinderella's visit to the royal ball. When the lights went down and all of the dancer's costumes lit up, it was just like the Cinderella unit in the Main Street Electrical Parade....but this was two years before there ever was an "Electrical Parade"! 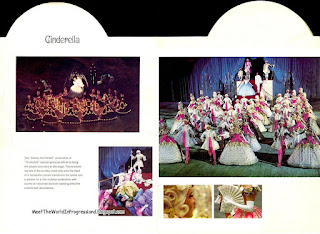 Next came some smaller acts like Goofy and his jalopy, the toy soldiers from Babes in Toyland, and the the Big Bad Wolf and the Three Little Pigs.

These were followed by "The Dumbo Circus" segment, which featured high wire acts and aerialists. There was always something about those "elephants walking on their front feet" costumes that I liked. Maybe they reminded me of the topiary that used to be outside of It's A Small World at Disneyland. 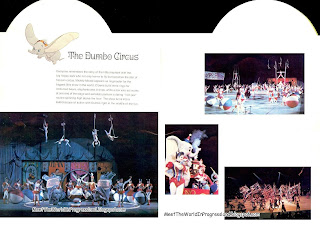 And then came The Grand Finale! 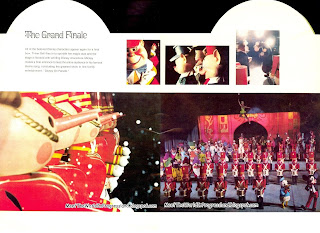 One last shot by my dad: 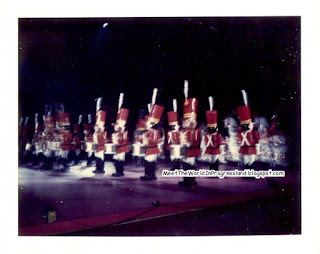 The program includes some nice little behind the scenes shots of the set painters, costume makers and the performers rehearsing. 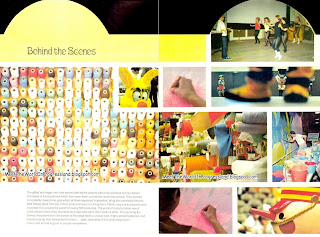 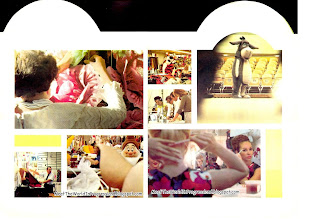 There are some well known Disney names listed in the credits below, including Roland (Rolly) Crump as Art Director. 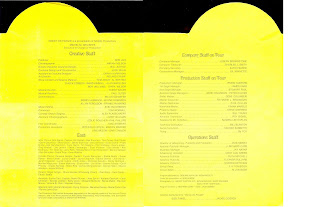 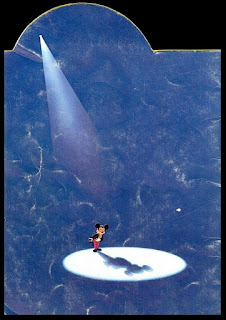 In addition to buying my brother and I the program, my parents bought us each a souvenir during intermission. We both chose "Snap-Eeze" figures which were made by Marx (the same company that made Disneykins). My brother's was a Goofy figure and mine was Pluto, but somewhere down the road, I lost mine! Here's is my brother's Goofy, but it has seen better days. He no longer has his moveable ears and he is also missing one arm and a little bit of paint on his hand! 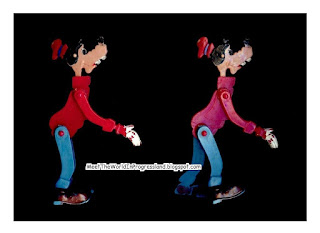 I wasn't able to find our exact figures on ebay, but I did come across some other Disney Characters and the back of the original packaging shows our Goofy and Pluto figures. 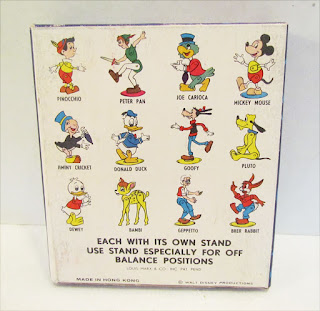 Apparently, the figures came with a base as seen with this Brer Rabbit figure. I don't remember that, but Goofy does have holes on the bottom of his feet for attaching to a stand. 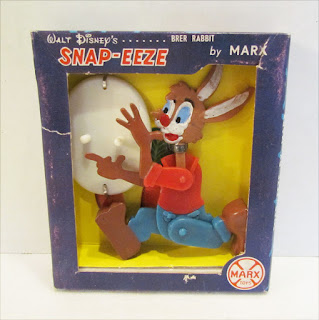 Later in the year, my brother received a "Disney On Parade" View-Master pack as a birthday or Christmas gift. If I ever get a scanner that allows me to scan View-Master reels, or if I figure out a better way to scan them using my current slide scanner, I will post all 21 of those images! 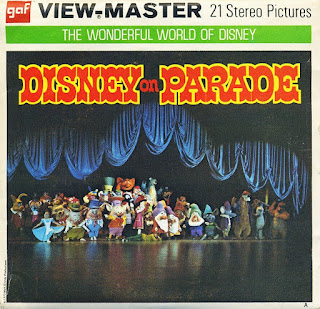 I found some original tickets for the show on ebay. This first one is from the show's premiere at the Long Beach Arena on December 16, 1969. I wonder why they didn't reserve seats for the premiere engagement?

This ticket is for a show at the L.A. Memorial Sports Arena in June of 1970. This would have been two months before my family saw the show in Anaheim. I didn't think to ask my mom if she saved the tickets, but I'm assuming if she had, I would have seen them by now.

If anyone is interested in watching the show, it was actually shown on an episode of "The Wonderful World of Disney" back in 1971. There are some differences in this show from the one I saw. I'm sure some things had to be edited out for the one hour TV show, but there are also quite a few acts included that we didn't see and that aren't listed in the program above.

After doing a little research, I realized that this televised show was a cross between the first edition of the show and the second edition which ran from 1970-1971. The second edition acts seem kind of choppy and crammed together at the end of the hour. They include segments for Snow White, Pinocchio, Fantasia, the Disney Villains, Herbie the Love Bug, and those dancing barnyard chickens that I have never been able to figure out what they are from, but they were used prominently in one of Disneyland's early Christmas parades. Watch for a brief cameo appearance by "Colonel Sanders" at the end of that segment! The finale here is also from the second edition of the show and features a very groovy rendition of "It's A Small World." Enjoy!