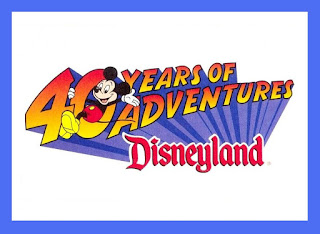 Well twenty years ago, in honor of the 40th anniversary, there was a show that was presented daily on the Tomorrowland Terrace stage. The name of the show was "The Magic Kingdom Kabaret". 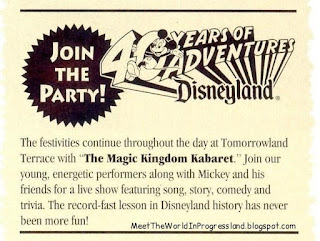 At that time, the roof of the Tomorrowland Terrace stage was redressed with a 40th anniversary motif. (Unfortunately, it had already lost it's Rolly Crump-designed spires back in the eighties.) The slogan for the anniverary was "40 Years of Adventure" and was intended to tie-in with the Indiana Jones "Adventure" attraction, which was opening that year. 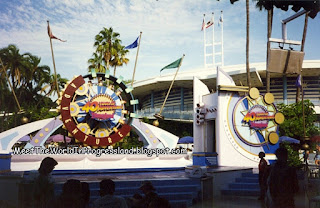 When the stage raised up for the show, there were four performers who sang and danced while accompanied by a live band. Aladdin, Belle and the Fab Five also made cameo appearances. 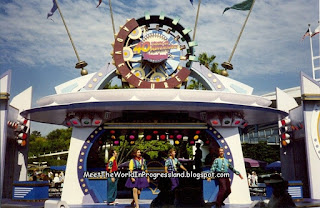 The foursome was sort of like a nineties version of The Kids of the Kingdom....uh, minus 5 guys and 7 girls! 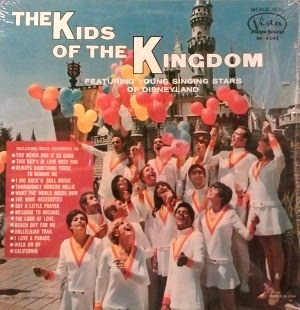 Here's an aerial view of the show. I took this from the Rocket Jets while they were in motion (that's why it's slightly blurred!) Gee, if we could only get this view of Tomorrowland today! 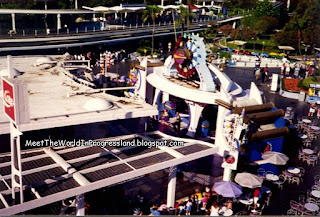 I liked the 40th Anniversary show, but I remember that I didn't appreciate the part when "Fact Guy" sings a couple lines from, "There's a Great Big Beautiful Tomorrow" and "Let's Get Together" and then says to the other performers, "Don't you remember the Carousel of Progress?"......"Don't you remember Hayley Mills in The Parent Trap?", and the others all dismissively respond, "NO!!!" Maybe that was because the Carousel of Progress was my favorite attraction as a kid, AND because The Parent Trap was one of my favorite movies. Also, hellooooo....the Sherman Brothers wrote both of those songs! Oh well, I suppose whoever wrote the show back then, thought it was funny.

I really wish they had done a show like this for the 60th anniversary, but I'm guessing there was no way they were going to get rid of the "Jedi Training Academy" which is currently presented on the Tomorrowland Terrace stage. I also wish they would bring back the Kids of the Kingdom. All 16 of them! (This land is your land, this land is my land.... ♪ ♫ ♪)

If you are interested in watching Magic Kingdom Kabaret, here it is in it's entirety. I hope you enjoy it!