1 Year Anniversary & The Cave Of Wonders

Today's post is sort of related to my 1980 Trip Report (the post before last.) In that post, I did a "mini-rant" about the changes to Disneyland's Storybook Land Canal Boats and mentioned how the cave that is now referred to as the Cave of Wonders, used to be referred to as "the very same cave that the Witch traveled through to bring her poisoned apple to Snow White." I think that line used to work, since the first thing you encounter after exiting the cave is the cottage of the Seven Dwarfs. The first time I heard the new storyline, I didn't think it really worked because who could forget that in the movie "Aladdin," the Cave of Wonders was a huge tiger's head with it's gaping mouth as the entrance?
. 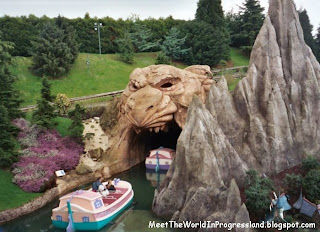 .
Well, in Disneyland Paris, the canal boats do have the tiger's head entrance for their Cave of Wonders and the boats do enter through it's mouth. The Paris version of the attraction opened in 1994, the same year as the Cave of Wonders addition/change was made to Anaheim. Other differences in the Paris version are a pre-recorded narration instead of a live host, forward facing seats on the boats, and miniature characters included among the miniature settings.

Congrats on the anniversary—here's to many more!

The canal boats in Paris are really delightful - even though they're without a pilot. The storybook scenery is just incredible. Thanks for the reminder.

CONGRATULATIONS on your one year anniversary!! You do an awesome job.