In 1987, the Mark III Monorails at Disneyland were retired and replaced with the Mark V Monorails (the Mark IV was designed for use at Walt Disney World).  After retirement, the Mark III "Monorail Red" train was chopped up and converted into "Mickey's Mouseorail." 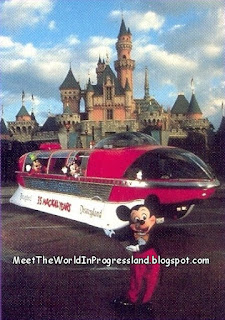 The Mouseorail was a street-legal vehicle that toured the country in 1990 to promote Disneyland's 35th anniversary.  Prior to embarking on it's promotional tour, it appeared in a pre-parade show for the 101st Tournament of Roses Parade on New Year's Day, and then again at Disneyland in the premiere performance of the Party Gras Parade on January 11th, 1990. 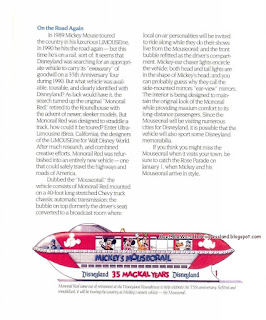 If you would like to see footage of Mickey's Mouseorail making it's debut in the 1990 Tournament of Roses Parade, you can watch it below. The Mouseorail appears at the 5:40 mark, but the video includes the full Disney pre-show, as well as the entire Rose Parade.

Back in the late nineties, I used to drive to and from work using West Street (now Disneyland Drive). This was back when Disney was buying up property for their "resort" expansion. There used to be a small campground/RV park located on the east side of West Street, that backed up against the Disney property. After Disney purchased this property, they put up a gate across the driveway and used this property for storage. One of the items that was stored back there for a while was the Mouseorail. Since it could be seen just sitting there on the other side of the fence, I decided to pull over one day back in March of 1997, and take some pics of it through the opening in the gate. 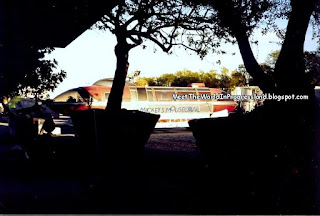 Note the steering wheel that was installed in the nosecone of the monorail. There is also a pirate ship parade float that can be seen in the distance. I'm not sure which parade that would have been from. In the foreground, we can see a couple boxed-up trees. I wonder where those trees were from and where they ended up? 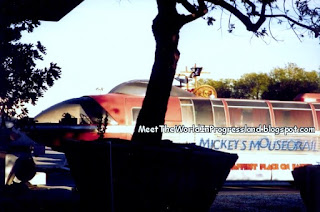 When it came time to design a new Tomorrowland, the original plan for the former Mission to Mars space was to have it be a restaurant where guests could eat their food while sitting in an old Skyway gondola, a PeopleMover car, or the actual Mouseorail car. One of the old Mission to Mars space capsules (there were two theaters!) was going to be left intact and guests were also going to be able to eat their food in that theater while watching the original "Rocket To The Moon" footage play on the floor and ceiling. Well, as we all know, plans can and do change very easily over at Disney (Helloooo, Westcot and Port Disney!) These plans got scrapped and what we ended up with was Redd Rockett's Pizza Port where guests can eat their food while sitting next to the Monorail, PeopleMover, or Skyway......attraction posters. Waaa waaaa! 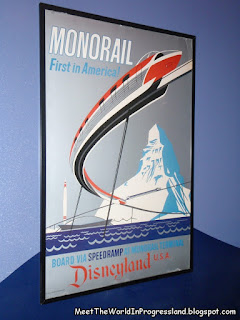 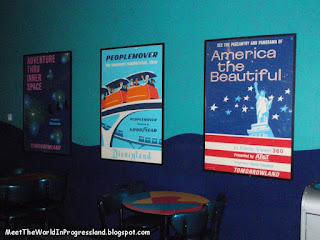 It was then decided to just use the old attraction vehicles as decor in both Tomorrowland's Premiere Shop and in the queue of the new Rocket Rods attraction. At this time, the Mouseorail/Monorail Red was chopped up again and a portion of it went into the Rocket Rods queue along with a couple Rocket Jet vehicles, a couple PeopleMover cars, and a car from Space Mountain. (To see pics of the old Tomorrowland attraction vehicles that were used in the Premiere Shop, click here for my previous post from 2009: Vintage Tomorrowland Ride Vehicles.)

For the Rocket Rods queue, the vehicles were painted blue and tape was applied to them to give them a "blueprint" appearance. 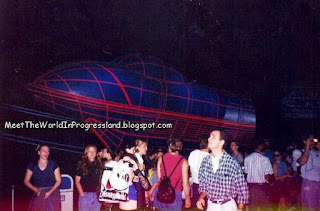 You can see in the photo above and below that a mirror was used at the end of both the Monorail and the PeopleMover cars to give the illusion that they are longer and that they are coming out of a tunnel.

I love the way that the PeopleMover cars were just placed on top of the carpet without a base or anything. At least a fake beam-way was recreated for the Monorail. And how about the irony of that statement above the PeopleMover cars? It reads, "In the world of creativity, there's no end to the possibilities." Oh, I think there WAS an end to the possibilities and they reached it with Tomorrowland '98! 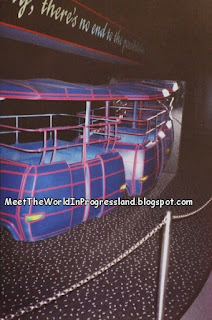 This next photo shows a couple of the old Rocket Jet vehicles. On the wall in the background, there are blueprints for the Tomorrowland Moonliner Rocket, as well as one for the Flying Saucer attraction. 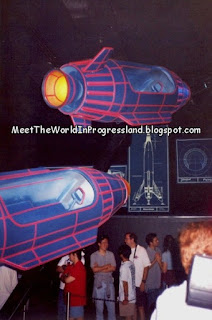 Well unfortunately, there was not a happy ending for "Monorail Red." At some point after the closure of the Rocket Rods, that last remaining section of the Mark III Monorail was scrapped and another piece of Disneyland history was lost forever. :-(

(And as a side note, the front section of one of the 1971 Walt Disney World Mark IV monorails was saved after it was retired and is now in the hands of a private collector. To see a brief video tour of it's interior and exterior, click below:)

To see footage of the rescued WDW Mark IV Monorail being reunited with it's designer, Bob Gurr (at Walt's Barn), click below: