Mickey Mouse is celebrating his 90th birthday this month! Gee, it seems like only yesterday that he was turning 50! 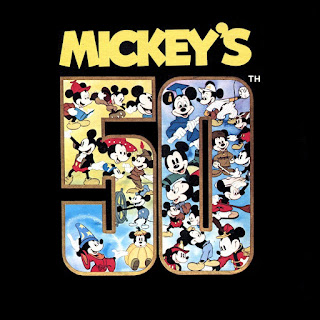 That year was 1978, and there was plenty of merchandise created to commemorate Mickey's 50th. 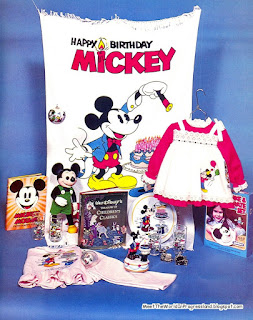 There was "The Official Birthday Book"...... 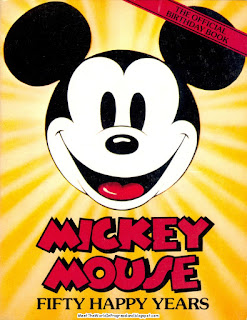 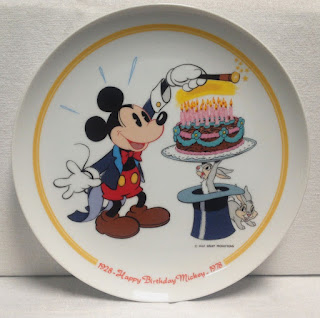 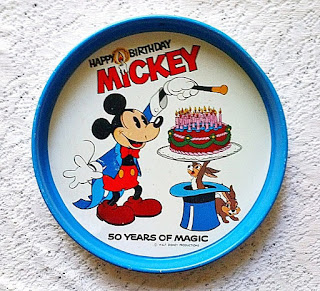 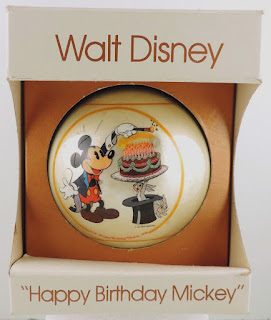 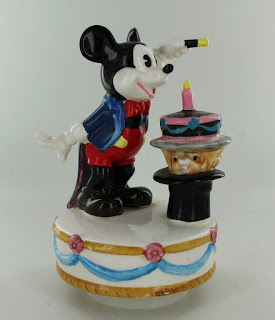 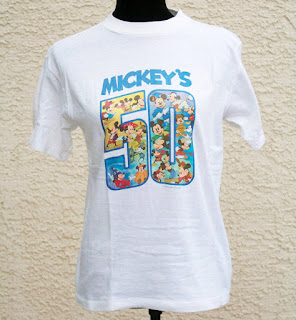 Some of these items were available at Disneyland, as well as other retail locations. However, some were actually exclusive to the park, like this book of matches and pinback button. 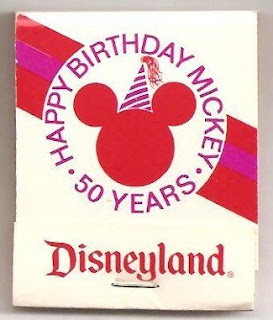 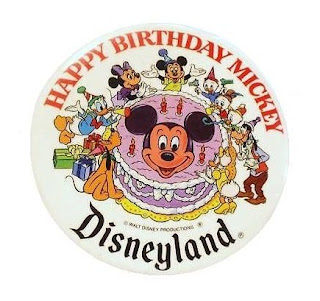 Mickey was even featured on the cover of Life Magazine, along with a full cover story inside. 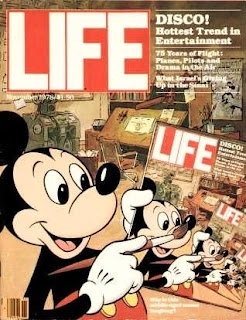 There was also an article about his milestone birthday in the November 11, 1978 issue of TV Guide. 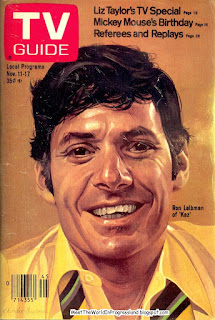 The article (by Maurice Sendak), began by mentioning that a special episode of The Wonderful World of Disney, titled "Mickey's 50," would be airing the following week. 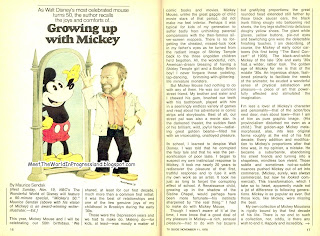 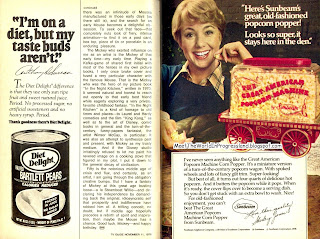 Now, let's take a look at what was airing on television, 40 years ago:

Hollywood was celebrating it's 75th anniversary with a star-studded blowout! 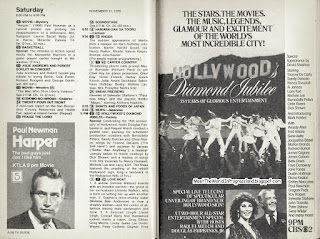 The Wonderful World of Disney was showing The Boatniks, as a part of the show's 25th anniversary that year. 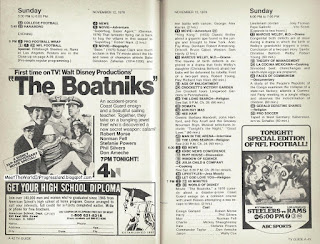 Ode To Billy Joe was airing on TV for the first time. I have never seen that movie. It just always sounded kind of depressing! Fifteen years later, Robbie Benson would provide the voice of "The Beast," in Disney's animated version of Beauty and the Beast.

Family Feud was having one of it's special celebrity editions with the casts of five different soap operas. I never watched daytime soaps, but it's kind of sad to think that out of all of these shows, General Hospital is the only one that is still on the air. I remember my mom watching The Secret Storm and As The World Turns! 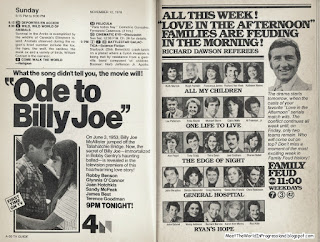 On Dallas, the Ewing Family was facing their "worst crisis." This was before J.R. got shot, causing the entire nation to ask the question, "Who Shot J.R.?" 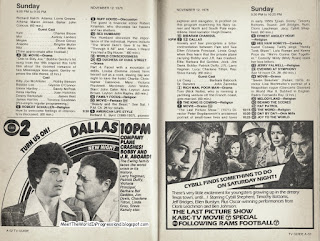 Pearl Bailey was guest starring on The Muppet Show, BEFORE Disney "acquired" them from Jim Henson. 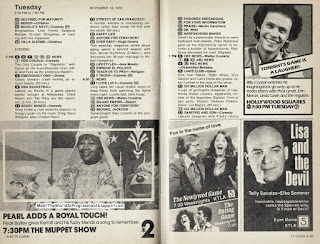 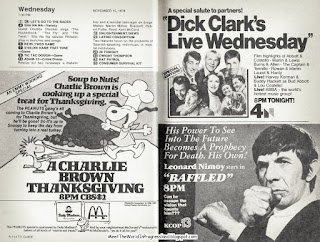 Farrah Fawcett was making her second "forced" guest-starring appearance on Charlie's Angels, following the breaking of her contract at the end of season one. 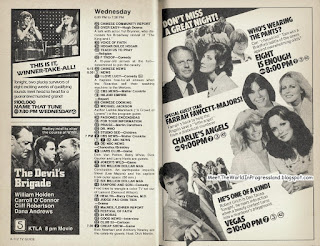 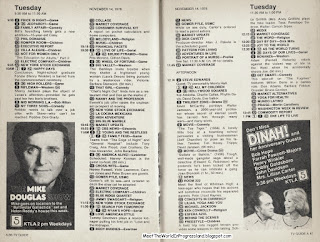 The New Mickey Mouse Club had been canceled the year before, but was still being shown in repeats. 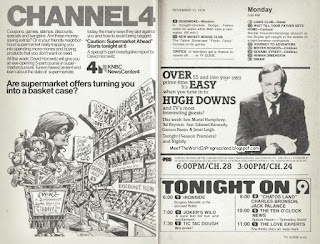 The Love Boat and Different Strokes were both having special "Thanksgiving episodes." 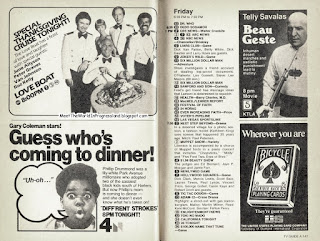 And a little trainwreck called the Stars Wars Holiday Special, aired for the first and only time on television. The special is significant for Star Wars fans for several reasons....okay, maybe only one. It marks the first appearance of the character, Boba Fett. We do get to meet Chewbacca's family and we also get to hear Princess Leia sing.....not necessarily good things! The special is jaw-droppingly bad, but in a "you can't take your eyes off of it" kind of way. 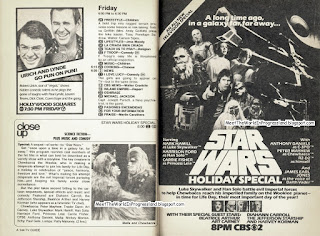 The ad on the inside back cover was for the Chevy Chevette, the "Best Selling Small Car In America." 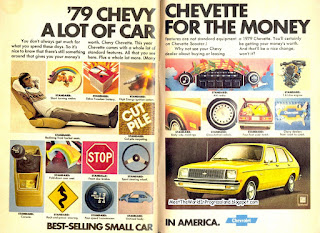 By the way, the artwork on the TV Guide cover was by the artist, Charles Santore. It depicts actor, Ron Liebman, who at the time was co-creator, co-writer and starring in the TV series, "Kaz." He won an Emmy for playing the title role, but unfortunately the show was still canceled after only one season. He would go on to win a Tony Award for playing Roy Cohn in the play, Angels In America. He also had recurring roles in Friends (as Rachel's father) and in The Sopranos (as Dr. Plepler). Here is the cover story article about him: 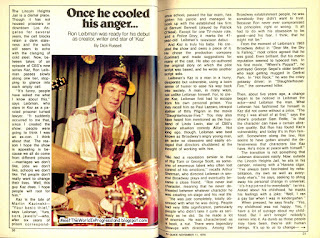 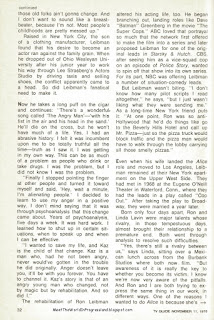 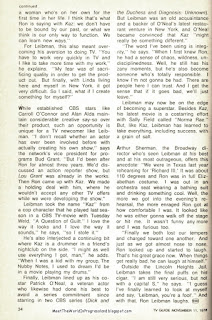 And here's a link to The Star Wars Holiday Special on YouTube, for anyone that wants to feel REALLY uncomfortable for the next hour and a half!