Back in March of 2016, I did a post about "pressed pennies" from various amusement parks and tourist attractions. In that post, I stated, "Believe it or not, I don't own one single pressed penny from a Disney park."  Well, I was wrong! I can't believe it, but I somehow managed to forget about the following pressed pennies within my collection of Disneyland souvenirs. I came across these recently and of course after seeing them, NOW I remember them!

Okay, these are actually pressed nickels, instead of pennies, but that's a minor technicality. These are from circa 1995. Note the nickel at the top, promoting Disneyland's 40th anniversary, and the one below it, which was available for the New Year: 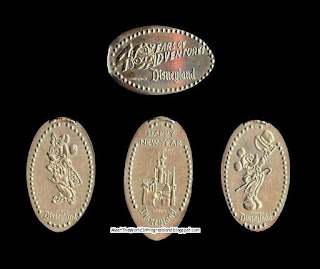 These pennies represent Mickey Mouse, the Disneyland Hotel, and various attractions or "lands" within the park. 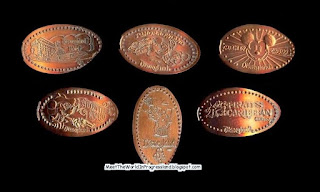 These nine pennies were all available back in the nineties, from machines located inside the Adventureland Bazaar. The top three are all characters from The Lion King (which was released in 1994), the next three represent various scenes in Adventureland, including the Indiana Jones Adventure (which opened in 1995), and the bottom three are all characters from Aladdin, (which was released in 1992). 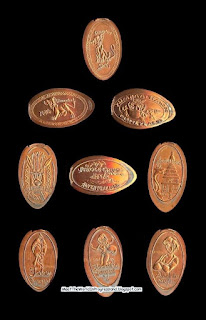 Next, we will take a look at some Disneyland "commemorative" souvenir coins.

First up is this coin that I purchased in the Main Street Emporium, back in 1980. 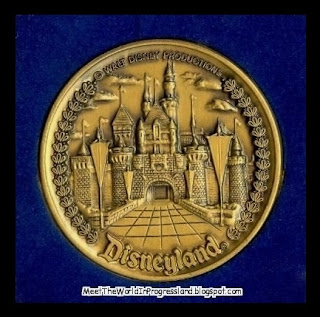 The reverse side is divided into six sections for each of the park's "lands," with the exception of Bear Country.  I guess they thought they would solve that problem by putting two of the characters from the Country Bear Jamboree attraction, under the "Frontierland" heading. 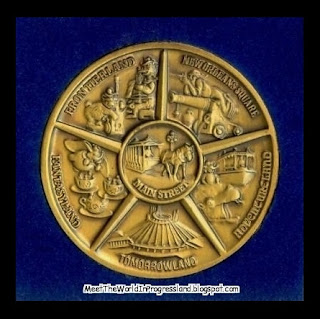 The coin was "mounted" within a cardboard square, with a circular cut-out.  The cardboard was "flocked" with a material which makes it feel a bit like velvet.  The coin and it's mounting were then placed inside this clear plastic case. 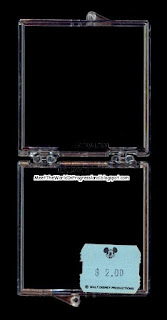 I purchased this next coin at the same time as the one above.  Both coins are just a little larger than one and a half inches in diameter (or slightly larger than an Eisenhower silver dollar).  This coin was made specially for Disneyland's 25th anniversary. 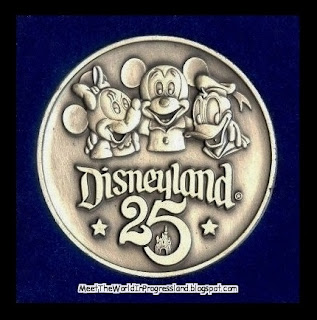 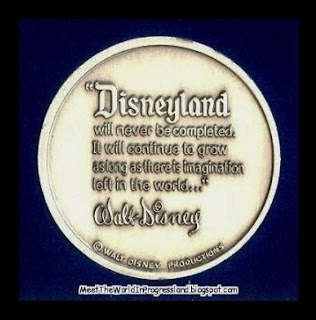 As can be seen by the original price tag, this coin cost a dollar more than the non-anniversary souvenir coin.

This 30th anniversary coin from 1985, was smaller in size than the previous two coins (about the size of a quarter), and came in a small cardboard box with a clear plastic lid. 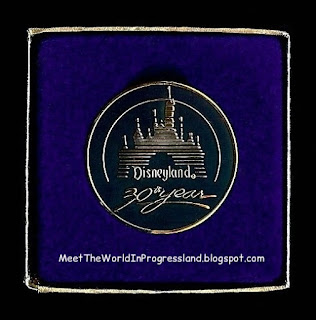 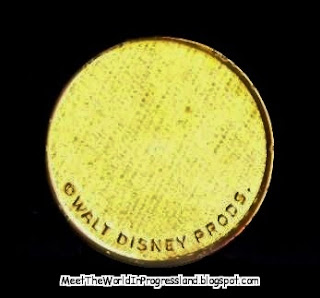 The price of the 30th anniversary coin was $2.50 more, than the one for the 25th anniversary, five years earlier. 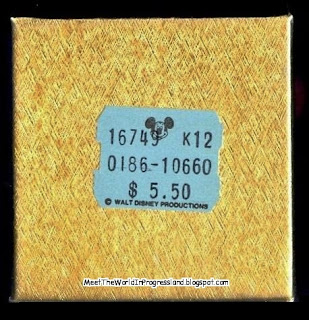 For the 35th anniversary in 1990, the souvenir coins went back to their previous size. 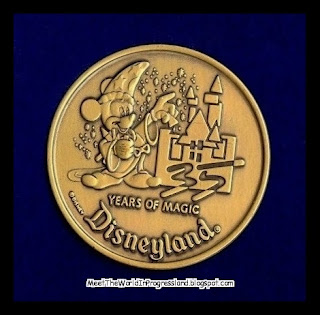 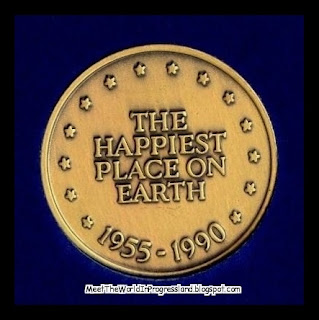 The 35th anniversary coin actually came down in price, and was only .95 cents more than the commemorative coin for the park's 25th anniversary: 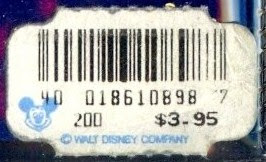 I had an annual pass in 1995, and went to the park quite a bit that year, but I never saw a souvenir coin for the park's 40th anniversary (other than the "pressed nickel" seen at the top of this post).

In 2000, there was a coin available for the park's 45th anniversary. 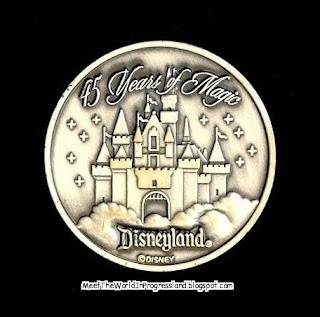 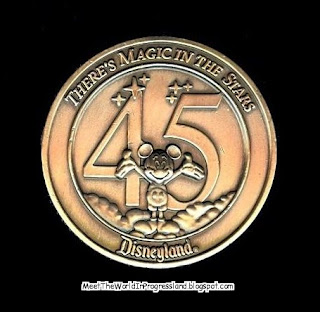 For those keeping track, the price had now doubled in the twenty years that had passed, since the 25th anniversary coin. 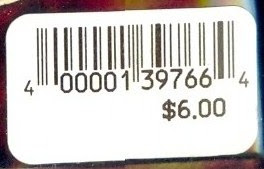 At one time, Disneyland used to have special events, such as "Viva Mexico" days and "Festival Japan" days.  These events celebrated other countries and their cultures, and sometimes featured special merchandise.  This coin was available during the park's "Festival Japan" days, in 1984. 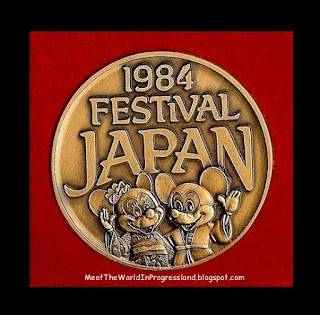 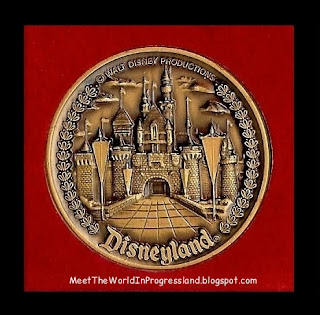 And this one was available the following year, in 1985: 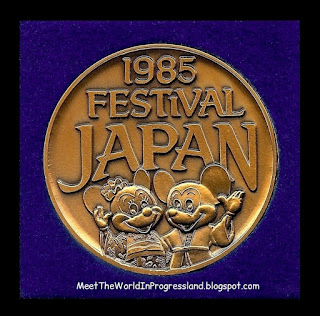 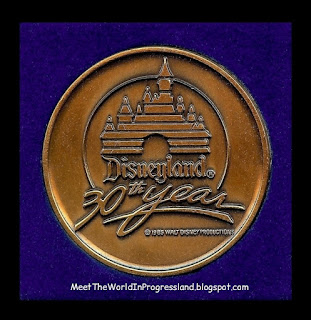 This is my oldest souvenir coin from Disneyland.  It features the Chicken of the Sea Mermaid on one side....... 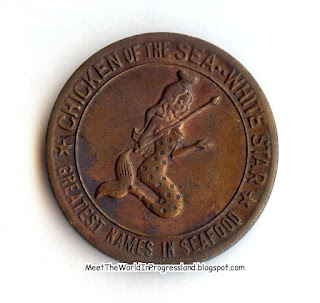 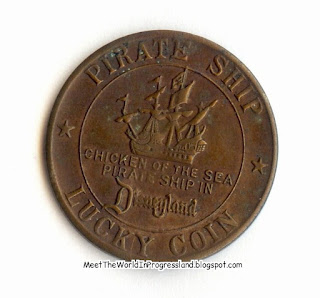 This Jack Skellington coin is from December of 2006.  It was free with the purchase of a meal, at the park's Cafe Orleans and French Market restaurants. 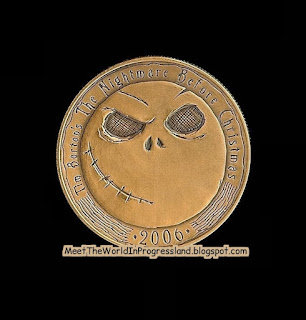 The coin was just one out of a series of thirteen, all with different facial expressions of Jack's. 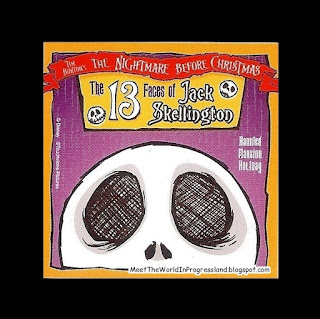 All of the coins had this image of the Haunted Mansion (Holiday) on the reverse side: 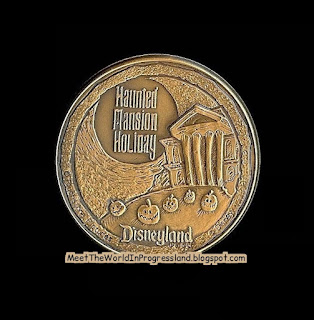 We will end this post with a couple of arcade "tokens."  This one was available at the Starcade, in Tomorrowland. 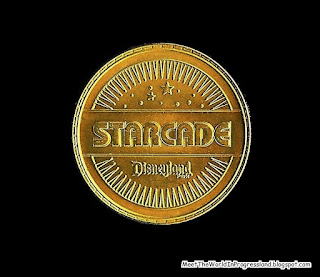 And this token was available at "Flynn's Arcade," during the special nighttime event, "Electronica," at Disney's California Adventure.  Both the event and the arcade, opened in the Fall of 2010, and closed in the Spring of 2012. 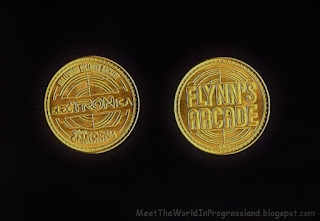 For anyone who might be interested, here is the link to my previous blog post (from five years ago) on souvenir Pressed Pennies, which includes pennies from Universal Studios, Magic Mountain, Knott's Berry Farm, and more.