Back in March, I did a post about Tokyo Disneyland's popcorn wagons and mentioned that a couple of them get decorated for Halloween. Let's take a look at those two locations and their seasonal decor.

First up, is this popcorn wagon in Westernland. Here we find Big Al from Country Bear Jamboree all decked out as the Wicked Witch. He even has a basket of apples on his arm! 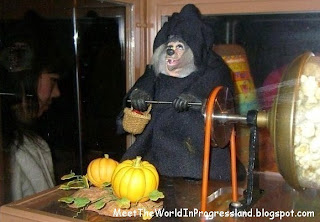 Notice the wig and the small mole on his nose that help complete the costume. 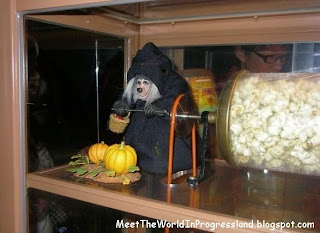 Here's how he looks the rest of the year. 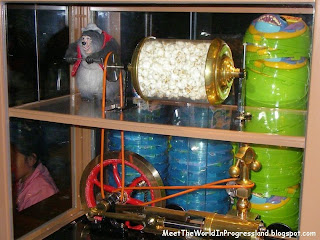 Next we have another Westernland popcorn wagon featuring Pecos Bill and his horse. Pecos Bill is wearing a Captain Hook hat and wig. His costume also includes a hook for his hand and a strap-on prosthetic chin. 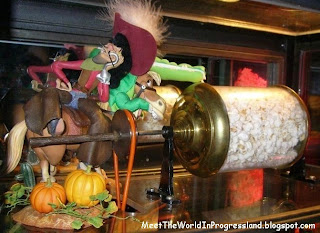 His horse even gets to wear a coordinating Crocodile costume! 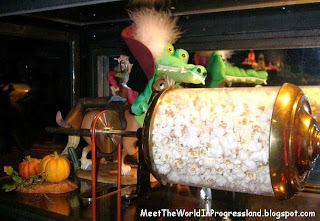 Here's how they look without their costumes. 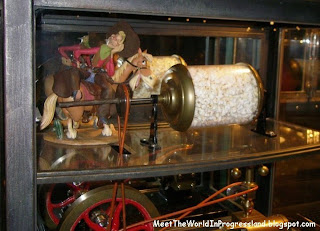 Just in case I don't get another post up before Saturday, I want to wish everyone a very safe and happy Halloween!
Posted by TokyoMagic! at 12:57 PM 4 comments: 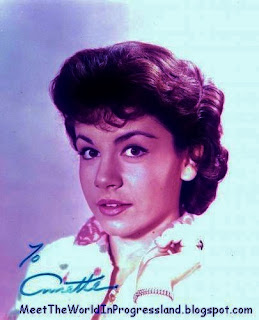 Today, we'll be taking a look at Disneyland's Halloween decorations from 14 years ago. It's October of 1995, the very first year of "Mickey's Halloween Treat." As we approach the park, a huge inflatable Maleficent can be seen in the parking lot. This is the same inflatable that was used to promote Fantasmic in 1992. Check out this photo of the Maleficent balloon on Westcot 2000's blog. 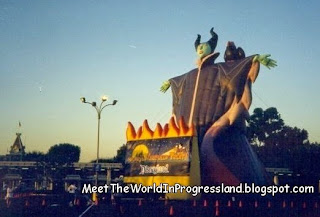 Once inside the park, we are greeted in Town Square by Grandmother Willow from the film, "Pocahontas." This is the same spot where the Christmas tree is placed every year as well as the giant Mickey-shaped pumpkin and the recent "Celebrate" envelope and balloons. 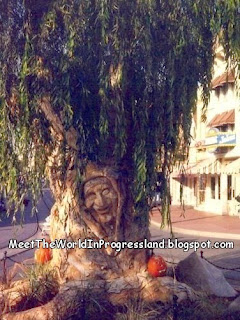 If we stop and take a peak inside the Emporium, we'll see that the revolving centerpiece of Mickey, Goofy and Donald has been decorated with leaves and acorns for the Fall. 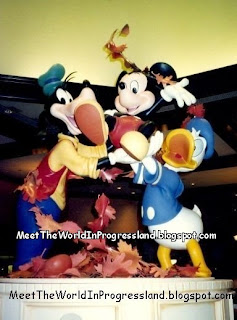 On a recent trip to Disney's California Adventure, I took the following photo but I didn't realize that I had seen these figures before until I was reviewing my photos for this post. It looks like they have repositioned Donald and changed the color scheme on Goofy, but they are obviously the same ones. They also decorated these figures for the Winter of 1995 and I will be posting a photo of that in the near future. 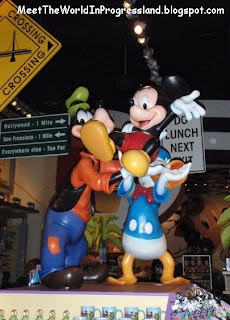 Moving a little further up Main St., we see that the Candy Palace has also been decorated for the season. Here's a vignette featuring the Wicked Witch. There is a jar of candy corn nearby, as well as a Jack O' Lantern filled with more yummy treats. 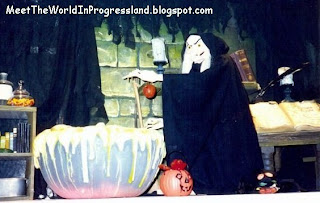 Now let's head on over to the patio area of the Plaza Inn Restaurant, where there is a giant pumpkin carving demonstration taking place. That pumpkin on the right weighs 516 pounds! 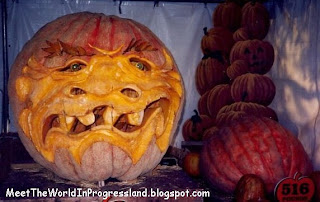 Upon leaving the patio area of the Plaza Inn, we get a nice view of the Fall flowers planted in the Tomorrowland entrance way. I could rant right now, but I've done enough of that in the past, so for today I'll just say, oh how I miss THIS version of Tomorrowland! 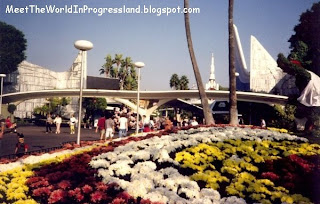 .
Note the topiary of Goofy on the far right. He's wearing a mask and cape and from what I remember, he was holding a sword too.....sort of a la Zorro. Also note the absence of PeopleMover cars. I believe it had closed for good at this point, even though I have photos of it running just 3 months earlier. That year was kind of sketchy for the PeopleMover. Sometimes you would go to the park and it would be open and other times not. 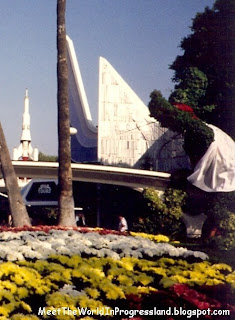 .
Unfortunately, the Halloween decorations stopped there back then. They did not decorate Frontierland and there was no Haunted Mansion Holiday yet. I have a set of photos from the following years' Halloween season (1996) and will try to get those posted before the 31st!

It's been a while since I've posted about Tokyo Disneyland, so let's take a look at our Disney neighbor from across the Pacific. First up, we have two pics of the "Hades" float from last year's Halloween Parade. This was a wonderful parade with two different versions for daytime and nighttime. The daytime version featured the Disney Villains magically appearing on the floats during the "show mode" part of the parade. The nighttime version featured the Villains on the parade floats during the entire parade and an entirely different parade soundtrack! 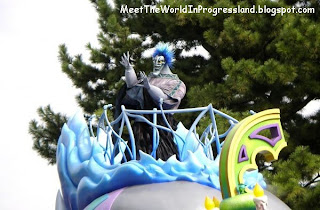 This is actually the back of the Hades float. I will try to get photos of the whole parade posted before Halloween. Tokyo Disneyland does a completely different Halloween parade every year. If you would like to see the entire Halloween parade from another year, click here. 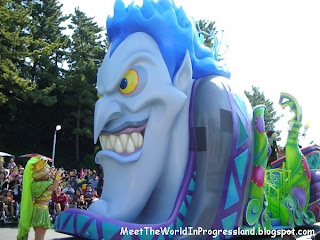 .
I mentioned in a post last year about how adults are allowed to wear costumes into the park during the week leading up to Halloween. Here is a photo of a guest dressed up as Hades. Some of the guests costumes get so elaborate, they rival the costumes of the Disney characters that walk around the park. To view more park guest costumes click here. 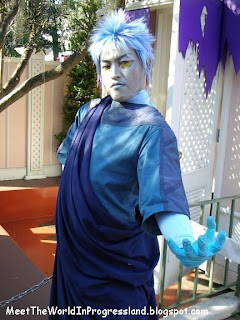 This next pic shows one of last year's Halloween vignettes in the Plaza. It's a ghost with a "Hades" face tormenting poor Goofy. I have also mentioned in the past how the Halloween figures currently seen along Disneyland/Anaheim's tram route are from Tokyo Disneyland's Plaza circa 2005. Tokyo reuses some of the figures from other areas of the park each year, but the Plaza figures are always new every year. I wish Anaheim would get all of Tokyo's old figures every year! (To see Plaza vignettes from other years....including the ones now used at Disneyland, click here.) 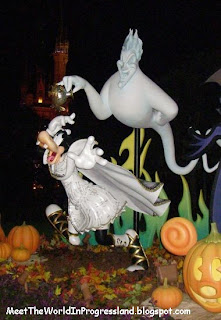 .
Tokyo Disneyland also decorates their Fantasyland, Toontown, Westernland (Frontierland) and World Bazaar (Main St.) for Halloween. To see Halloween decorations from all of these other "lands," click here.
Posted by TokyoMagic! at 1:01 AM No comments:

Today happens to be Julie Andrews' birthday. Of course this isn't the real Julie Andrews, just an incredible simulation as seen at Movieland Wax Museum, in Buena Park. (Sadly, Movieland permanently closed it's doors 4 years ago this month.) 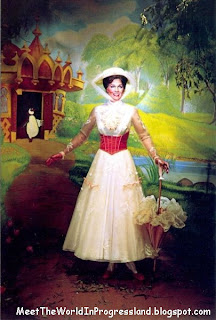 This is the REAL Julie Andrews. 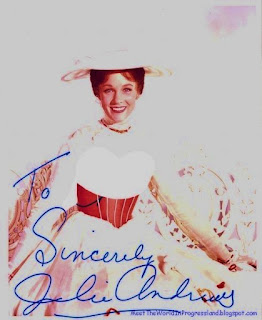