Where in the 1998 Tommorrowland could you have found Rocket Jets, PeopleMover cars AND Skyway buckets? I know what you're thinking. You are thinking "nowhere" because Disney destroyed all of those attractions. Well, the answer to that question is actually The Premiere Shop, located at the exit to the Rocket Rods attraction. (Of course, the queue for the Rocket Rods even had part of a vintage Monorail car, but that's the subject for another post!) 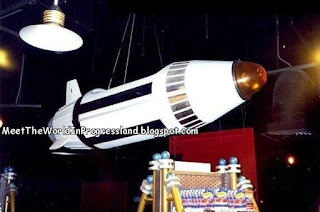 Notice the upright Rocket Jet vehicles being used to display merchandise in the next two photos. 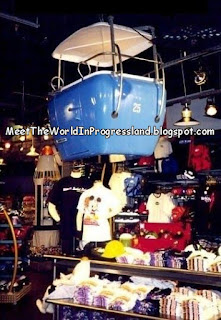 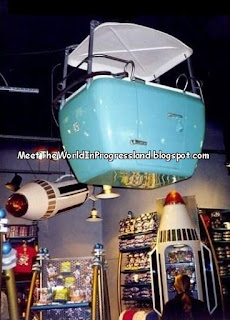 Here's a better view of one of the merchandise displays. Hey, the control lever is still in place! Doesn't it make you wish you could go for a ride...but up on top the old Rocket Jet platform? . 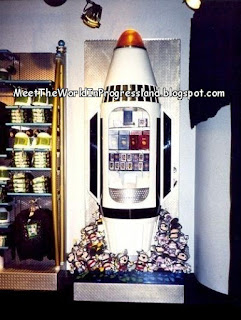 After Buzz Lightyear's Astro Blasters opened in 2005, the shop was renamed Little Green Men Store Command and was given a Buzz makeover, but a few of the old ride vehicles remained and can still be seen in the shop today. Here is what the displays look like today with their new paint jobs. 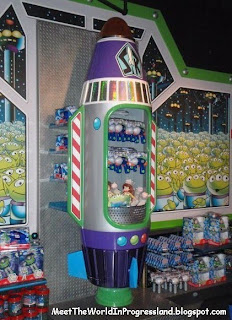 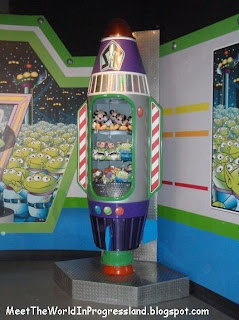 This is what the cash register counter looked like back in 1998. These are actual pieces of the old PeopleMover vehicles. 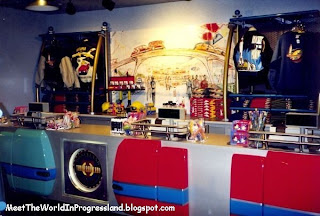 And this is what that same counter looks like today. 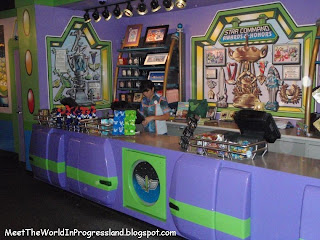 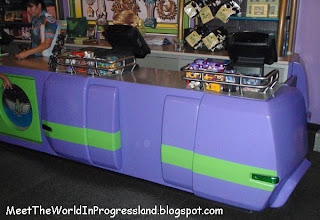 .
This scooped out area on the bottom is where the small white panels originally went as seen here at Daveland.
. 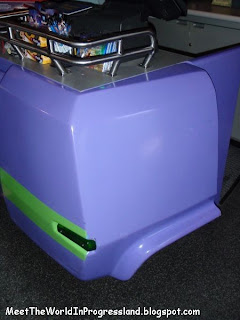 I definitely liked all of these vehicles better with their former paint jobs, but I'm just glad they're still around to remind us how cool Tomorrowland used to be!
.
*Post Update - 2015: To view a newer post with more pics of vintage Tomorrowland ride vehicles, including the last remnant of a Mark IV Monorail, click here: Mickey's Mouseorail

Time For Another Fort? 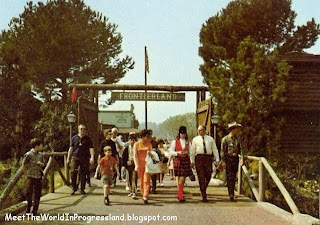 Original Frontierland Stockade
.
While visiting Disneyland recently, I noticed the following damage to the Frontierland entrance. (This photo was taken from the side path that leads from the Plaza Gardens to Frontierland.) 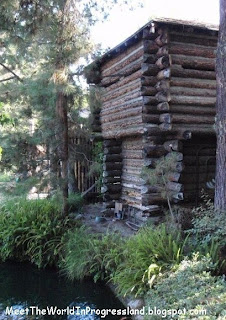 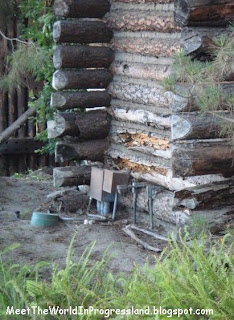 The next two shots are close-ups that were taken from the bridge at the entrance to Frontierland. 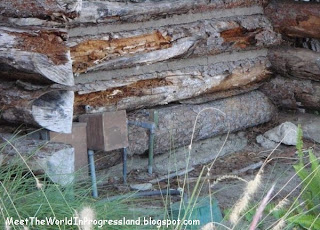 Moving the camera just a little to the left, we can see even more damage. I wonder if this is from termites, or if the wood is simply rotting away? 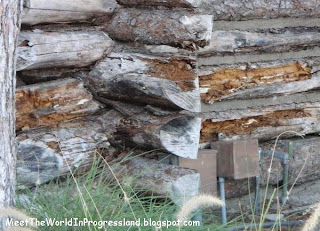 The current stockade is not original to 1955....it took the place of the original structure back in 1981. The following article is from a 1981 employee publication. 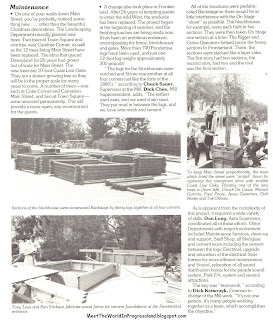 So, is this damage something that could be repaired or does it extend further than the eye can see? If the original had to be replaced after 26 years and it's replacement is now 28 years old, is it time for another Fort?
.
If the fort does have to be replaced, maybe they could get a two for one special and replace Fort Wilderness on Tom Sawyer Island at the same time!
Posted by TokyoMagic! at 12:04 AM 3 comments: 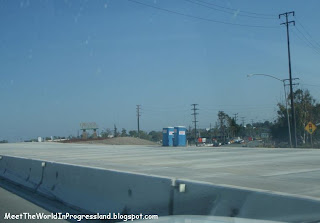 Recently, while driving to Disneyland on the 5 freeway, I noticed a new sign being erected at the Orange County line. This is the part of the 5 freeway that is currently being widened. The Knott Avenue off ramp is just to the right of those two Porta Potties. And if we were to turn our heads to the left, we would see the old NABISCO building (if it were still standing, of course). Please forgive the dirty windshield that I was taking the picture through! 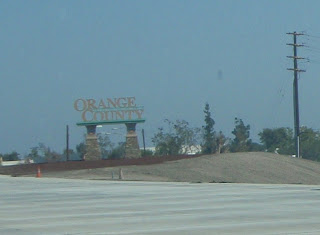 On the close-up below, I've placed two circles in the area where Japanese Village and Deer Park used to sit many years ago. In the mid-seventies, it became Enchanted Village, and then was unfortunately replaced with an industrial park a couple years after that. I plan on doing a post on Japanese Village in the not too distant future. 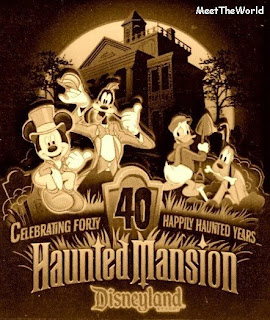 My earliest recollection of Disneyland's Haunted Mansion was in 1969 when I was four years old. It was summertime, so the Mansion had to have been less than a month old. I do remember it was the "new ride" at Disneyland. I also remember that it had a very long line and that I did not want to go inside because my brother had heard that things "pop out" at you. So while my dad and my brother waited in the long line, my mom took me to "see the dinosaurs" on the train. Afterwards, we had Mint Juleps and waited for them to come out. Well, my brother came back with very high praise for the ride and when we visited the park one year later, I finally felt brave enough to go inside. Funny thing though....I have a pretty clear memory about that one time that I did NOT go into the Mansion, but I have since been through the attraction so many times, that I don't have a very clear recollection of what it was like when I saw it for the very first time!

Today, I will CELEBRATE the Mansion's 40th anniversary by posting just a few photos from my personal collection. For some reason, I decided to experiment with some different photo effects including changing them all to sepia tone. 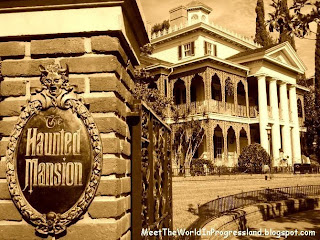 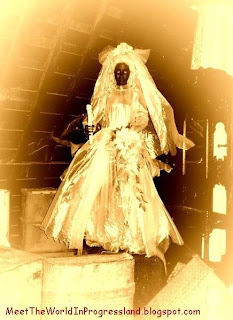 .
I took this photo of the bride back in January of 1996. This is when she still "floated" and her heart could be seen beating inside of her chest. I think this version of the bride was a much better effect than the one they have today....but that's just my opinion! 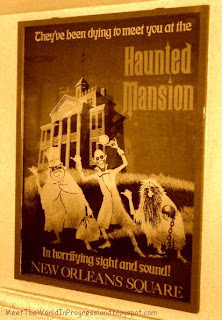 .
This last photo is of the attraction poster that hangs under the east train tunnel at the entrance to the park.
.
Happy 40th Anniversary to Disneyland's Haunted Mansion!!!
Posted by TokyoMagic! at 12:04 AM 4 comments:

I forgot to mention in my last post that the two "lost" Jungle Cruise scenes were both added in 1976 and were created by Disney artist/genius, Marc Davis. Here are a couple more scenes of his that were also added in 1976.
. 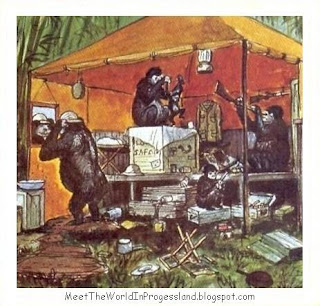 .
In fact, the Jungle Cruise had quite a large makeover in 1976. Here again, is that Winter 1982/83 Disney News Magazine from my last post, but this time I've circled the scenes that were added in 1976. (By the way, this cover art is the work of Disney artist, Charles Boyer.)
. 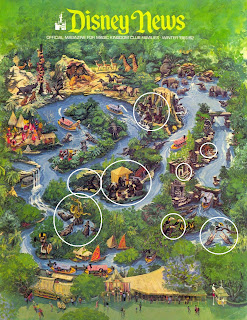 .
The lions that are feasting on a zebra in the African Veldt scene were also changed in 1976, but I'm not sure to what degree since there were lions there previously (but without the surrounding rockwork), so I did not circle that scene. I believe the gorilla below was also removed at this time and there may have been changes made to Trader Sam too.
. 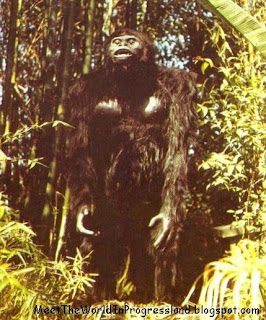 .
The Jungle Cruise has undergone some more changes in recent years including the addition of the piranhas, which I think was a good idea, but it just wasn't executed very well (helllooooo, I can see the water pipes/jets as the piranhas are jumping!) At the same time, the gorilla that was swiping at the crocodile was changed so that he is now reaching for a bunch of bananas sitting on top of a floating crate. The baboons that used to be sitting on the rocks near the African Veldt were also removed and the water that was trickling down the rockwork around them was turned off (why?). Some of these baboons were moved to a rock located just before the "deserted camp" scene....the one where the gorillas have taken over and are "having no trouble turning that jeep over."
.
I'm all ears if anyone would like to add any information on the most recent changes to the Jungle Cruise or any from 1976 that I may have left out!
Posted by TokyoMagic! at 6:40 PM 3 comments: