Pirates of the Caribbean Board Game - 1960's


Today is the 50th anniversary of Disneyland's Pirates of the Caribbean attraction!

I received this Parker Brothers "Pirates of the Caribbean Game" as a birthday present, back in the 1970's. Note that the box is dated 1965. The attraction didn't open at the park until 1967, but they must have been planning this game when it was still in the design or construction phases. 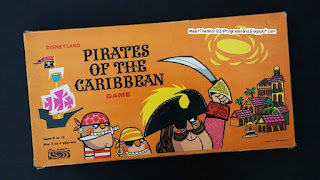 I like the cartoon-style graphics used on the game board. They are reminding me a little bit of the characters from the Rankin Bass Frosty the Snowman cartoon, or UPA's Mr. Magoo's Christmas Carol.....or even the characters from a segment of School House Rock! ♪ ♫ "Well, every person you can know....like a wench OR a pirate!!!" ♫ ♪ 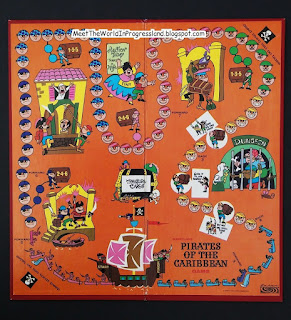 The instructions and game piece sheet has both 1965 (in Roman numerals) and 1967 printed on it. 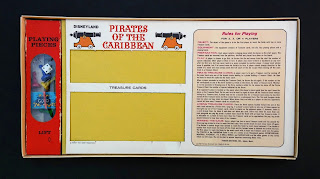 At the bottom of the "Rules for Playing," it mentions that this game was one of six in a series of Disneyland games. The other games in the series were, Adventureland, Monorail, Riverboat, It's A Small World, and Fantasyland. I have the original edition of the Monorail Game, but it was also reproduced around the time of Disneyland's 50th anniversary. I will try to get it photographed and posted soon. 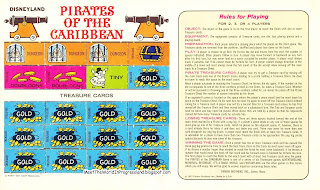 I remember the "Riverboat Game" being available at the local "Lucky" grocery store where my mom shopped. This was back when grocery stores had a toy aisle! The Riverboat Game actually sat there on a shelf and didn't sell for years. It's box got a little worn around the edges over time, that's how I knew it was the exact same one. I remember being tempted to buy it, but I never did. Now of course, I wish I had!

Happy 50th Anniversary, to Disneyland's Pirates of the Caribbean!