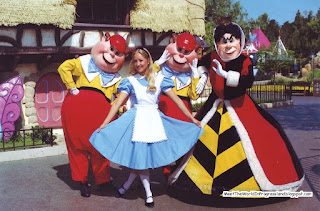 In 1984, a newly remodeled "Alice In Wonderland" attraction opened at Disneyland. The rest of Fantasyland had already been remodeled, and had opened just eleven months earlier as, "The New Fantasyland."

At that time, a sign was posted out in front of the closed attraction, letting guests know that a "New Alice" was coming soon. 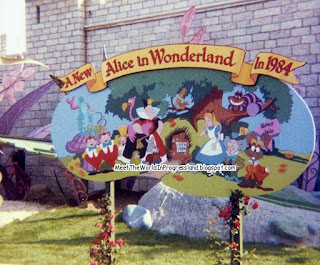 The Spring 1984 issue of Disney News Magazine had an article, about the anticipated reopening of "Alice." 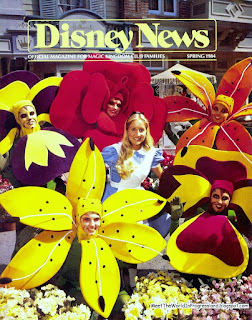 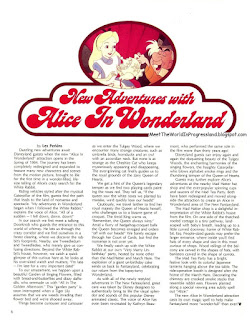 The attraction opened on April 13, 1984, after a special grand reopening ceremony. I was at the park that day, and took the following pictures.

The festivities began with the White Rabbit approaching the attraction with a giant pair of ribbon-cutting scissors. 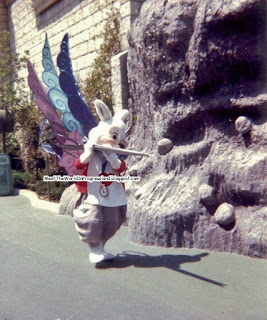 Next, the doors on the second level of the attraction opened and dancing flowers came out and made their way down the "giant leaf" track. These flower costumes were the same ones used in the Alice In Wonderland unit, of "Fantasy On Parade." 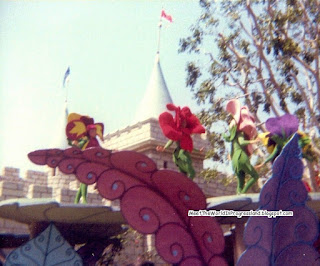 The dancing flowers were followed by the Queen of Hearts' marching cards. The large marching cards costumes were used the previous summer in the "Flights of Fantasy Parade", which celebrated the grand opening of The New Fantasyland. 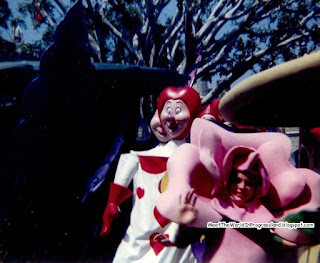 The Mad Hatter made an appearance on the second level, holding a large bucket of red paint. I wish I could remember more about the ceremony or what the Mad Hatter was saying here. I do remember that this was the time, when Disney made the switch from the Mad Hatter character being a person inside of a "rubber head" costume, to a "face character" (where the face of the person portraying the character is visible, and they are allowed to speak to guests). 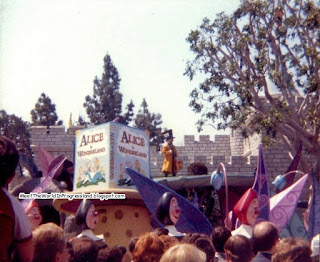 After the ribbon was cut, red and white balloons were released into the sky, along with some larger heart-shaped balloons. 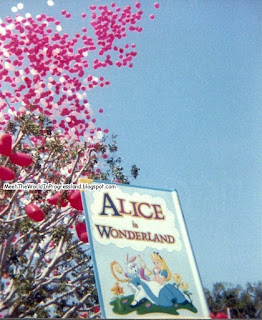 This video features partial footage (the second-half) of the opening ceremonies for the new Alice In Wonderland attraction, as well as other new additions to Disneyland in 1984 (like Donald Duck's 50th Birthday Parade and the 3-D film, Magic Journeys).

In 1982, the Disneyland guidebooks featured artwork, showing what the new Alice-themed section of Fantasyland would look like. 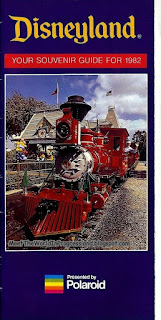 The "teapot" ride operator's booth for the Mad Tea Party attraction, never found it's way into the finished product. And notice on the far right, the Chesire Cat can be seen sitting on top of a mushroom. I wonder if this was intended to be an animatronic figure, a static figure, or if the artist was just "taking liberties." A static Chesire Cat figure was eventually added to the east side of the Alice attraction (the side facing the Matterhorn), but that came along many years later, and was not a 1984 addition. 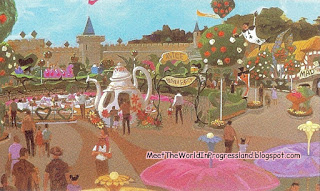 And here is a pic from 1982, showing the "Alice Unit" of Disneyland's Fantasy On Parade. The "Dancing Flower" costumes seen here, were the same ones used in the reopening ceremonies of the new "Alice In Wonderland," and also on the cover of that Spring 1984 issue of Disney News Magazine. 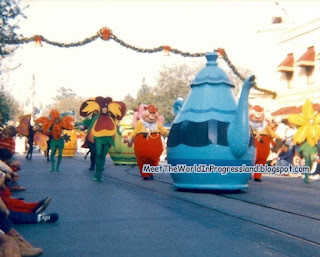