During my recent trip to Tokyo, I was a little surprised to see the characters from Disney's "Robin Hood" greeting guests just inside the entrance of Tokyo Disneyland. 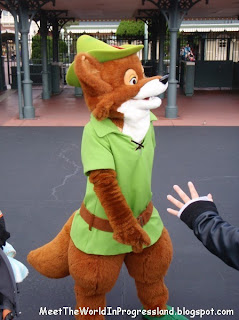 I had not seen these characters at Tokyo Disneyland before and it had been literally decades since I had seen them at Disneyland in Anaheim. 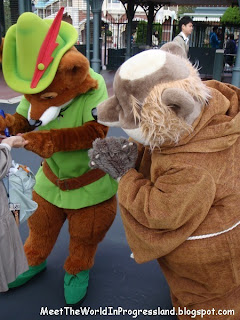 Friar Tuck had just finished autographing a photo that the guest had taken of him on a previous visit to the park. 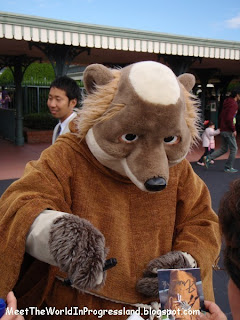 Here, the Sheriff of Nottingham joins Friar Tuck in a photo with a park guest. 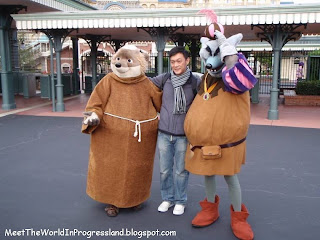 Next, we have the arrogant Prince John. 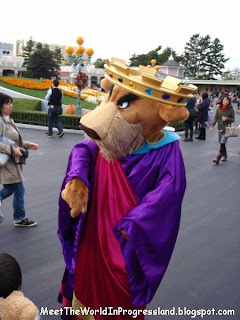 This photo shows that same guest holding her stack of amateur photos with a photo of Prince John on top. 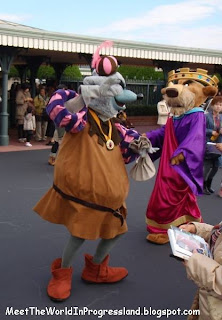 These two costumes haven't changed much in the past 35 years. For comparison, this next photo shows the Sheriff of Nottingham at Walt Disney World in 1975. 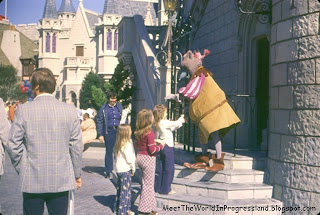 And this photo from December of 1981, shows Prince John riding in his royal coach in Fantasy on Parade at Disneyland. There was even a "Sir Hiss" poking his head out of the back of the coach. I wish I had a photo of him! This was the year that I was actually a cast member in the parade. 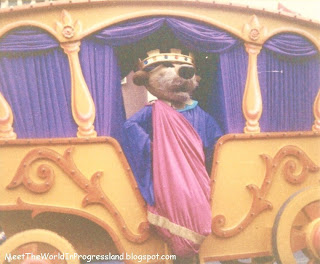 Disney News magazine featured the Robin Hood characters on the cover of their Spring 1982 issue. Prince John and the Sheriff can be seen hiding in the bushes up near the Fantasyland Skyway station, and Little John joins Friar Tuck on that giant rock. We can also see in this photo how the Robin Hood figure has changed more than any of the others. Compare his costume below with the one in the first photo. She isn't pictured here, but there was also a Maid Marion costume. 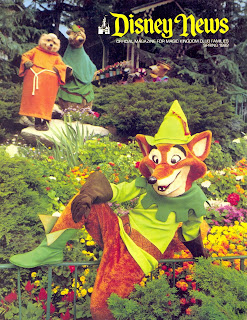 Inside the magazine, is an article about the first re-release of the film since it's initial theatrical release in 1973. 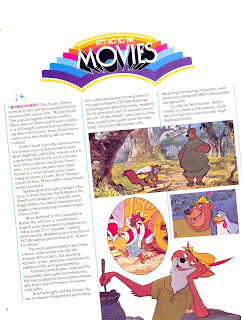 An ad for the movie was featured on the magazine's back cover. 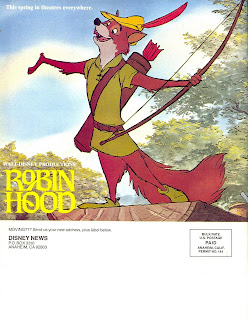 And since this is an "all Robin Hood" post, I'll throw in this vintage newspaper ad from the Los Angeles Times which was also for the 1982 re-release of the film. 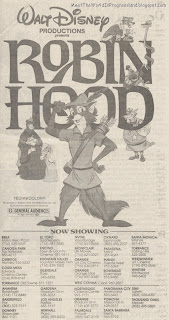 Awesome post - Wow those costumes look Marvelous! I don't think the bulk of todays DL Anaheim crowd would even know who they are..... I love that edition of Disney News!

How cool! Someday...someday I'll make it to that Park!

Very cool to see these characters still walking around a Disney park! It's funny how Robin himself actually looks less "on model" now than he did years ago... usually it's the other way around.

I love Robin Hood--Great pictures! Yes, the old Robin Hood costume was much better! The newer Robin Hood looks more like the adult Tod from "The Fox and the Hound."

I actually saw Friar Tuck in Disneyland USA 2006. He was hanging out with Eeyore, the Country Bears, Meeko, Baloo, and some penguin waiters, all back on Big Thunder Trail... It was pretty random.

But When I went to Tokyo Disney a year ago, the only characters I saw were Pinocchio and Geppetto in Disneysea.

VDT, thanks...and I agree, the younger generations here might not even know who these characters are.

Connie, I hope you do make it to Tokyo someday!

Major, you're right, usually the redesigned costumes are an improvement.

Dan, now that you mention it, he does look like Todd. That would be really cool to see Copper and Todd characters walking around the park....and maybe a Big Mama and Widow Tweed, too.

Cory, that does sound like a rather random grouping of Disney characters....weird!

Anonymous, thank you for the information. When I was in Fantasy On Parade in 1981, both Baloo and Little John were used in the parade. I had always thought their heads were both from the same "mold", but I just checked a photo of Baloo and can see that their faces are different. Thanks again for pointing that out!

Very detailed post. I haven't paid much attention to Disney's Robin Hood scene other than seeing the film when I was a kid. Yet, Tokyo you drew me in with your photo comparisons and text. Well done.

Thank you, Robert! Even though my brother and I were taken to most of the Disney movies as kids, for some reason we did not go see Robin Hood. I had to wait until it was re-released in 1982 to see if for the first time.

Whoah! That is AWESOME!! It's been years... Decades? since I remember seeing these guys!!

where do you get the fabric from? I want to have Robin Hood Sexy Costume and Ive been to several halloween stores and craft shops, and no one had any idea what I was looking for..

Sorry David, I have no idea where you could get that kind of material. These weren't amateur costumes. These were official costumes, the ones Disney makes for their "walk-around" characters in the park.

Wish I'd met them! That's one of my favorite movies. It's too bad they got rid of Maid Marion...and a Sir Hiss? That would have been awesome! And like Connie said, someday I'll make it to that Park. Someday. ;)