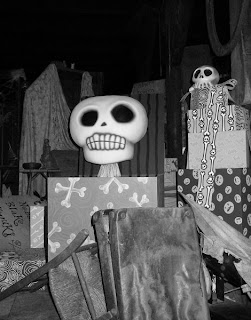 Today's photos are from the attic scene of "The Haunted Mansion Holiday Nightmare" at Tokyo Disneyland. 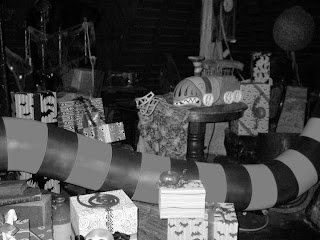 Tokyo's attic is almost identical to Anaheim's holiday version. The train on the chewed-up track is included, as well as the toy duck with the bloody bullet holes (sorry, I don't have a photo of him). The exception here would be the "naughty and nice" list that the snake is eating. Tokyo's list includes some Japanese names. I am assuming poor little "Eiichi" won't be getting anything from Santa this year since he has a little skull and crossbones next to his name. Or does that mean he is the only one on the list that WILL be getting a present? 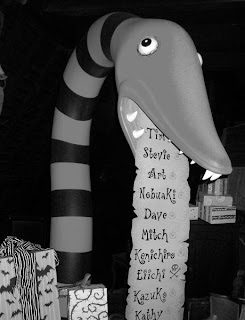 Upon exiting the attic, guests encounter Scary Teddy chewing on a string of Christmas lights. As he bites down on it, sparks fly from his mouth. Anaheim has this same scene, but the placement of Scary Teddy is different....he is sitting on a branch over the Doombuggies, instead of off to the side. 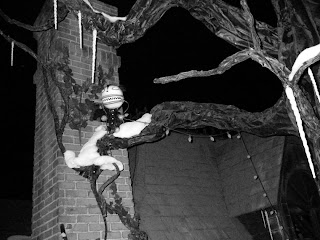 As a side note, Tokyo's non-holiday version does not have the updated bride that Anaheim and Florida have.....fortunately! I say that because, while the idea probably looked good on paper, I don't think it works in the finished product. The effect looks too phony. The projection of Madame Leota in the crystal ball works because her face is projected onto a three dimensional head. I noticed the last time that I saw the new bride, that her face is not three dimensional, it's flat. I think this adds to the lack of realism because there is no "depth" to the features of her face. It's the same thing with her arms, they are just a "flat" projection. They may as well be showing her on a television screen!

In tomorrow's post, we'll head on down into the Graveyard scenes!
Posted by TokyoMagic! at 7:33 PM

I very strongly disagree with your overly-negative opinion on the new bride in the Florida and California Mansions!