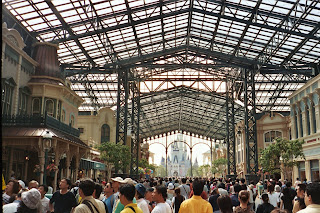 This is Tokyo Disneyland's World Bazaar. It's called World Bazaar because it was originally going to be themed to different countries from around the world. That concept was later dropped and replaced with the classic Disneyland "Main St." theme, but the name "World Bazaar" was never changed. The original concept came from early plans by Walt Disney to have an "International Street" at Disneyland. That street was going to run parallel to Main St. and would have been accessed off of the east side of Disneyland's Town Square, approximately where the gate opens for park parades. 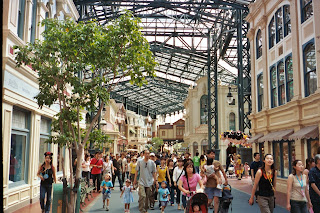 The roof over World Bazaar is made up of 3,000 panes of glass. It provides guests with protection from the elements, since Tokyo gets a pretty fair amount of rainfall. The photo above shows Center St. which crosses World Bazaar from east to west. Disneyland in Anaheim has a Center St. that crosses it's Main St. in the same fashion, but it is very short with "dead ends" on both sides. In Tokyo, this street actually leads somewhere. If you turn left, you can go directly into Adventureland without having to go through the Plaza. If you turn right, you can go directly into Tomorrowland. This extra access greatly improves the flow of traffic. 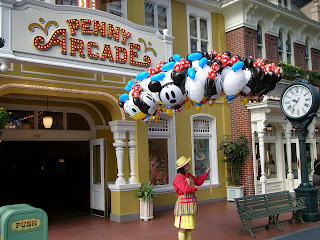 Notice the "flat curbs". This also improves traffic flow and cuts down on the number of guest "accidents".