Christmas tree under glass, anyone? Out of everything that is still standing in a state of decay on the old Santa's Village property, this one has to be the strangest. It's a disheveled Christmas tree just sitting there behind glass, apparently untouched for years! 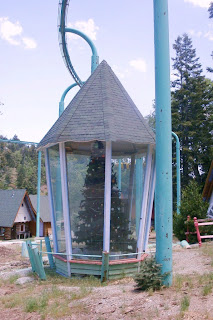 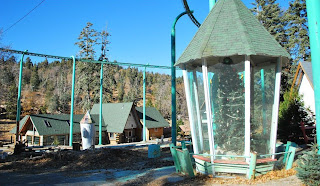 Hey, somebody forgot to open their Christmas gift! 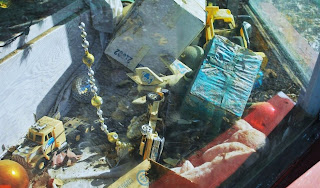 Here's a vintage postcard showing how it appeared in happier times. Check out the crazy, larger than life jack-in-the-box! And there's the Easter Bunny and Mr. Scary Pumpkin-Head Guy (taking a nap on the ground). The building with the blue roof on the left was the Candy Kitchen. 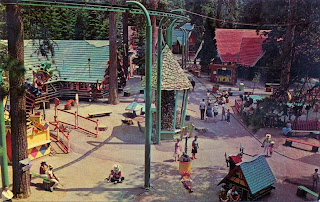 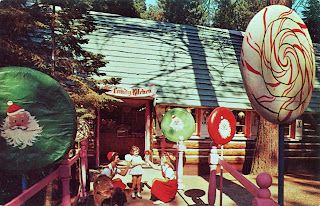 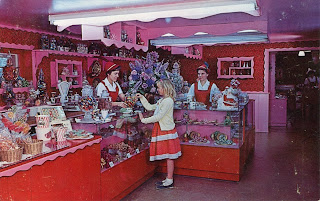 Here's a close up look at that psycho jack-in-the-box. I wonder what happened to him? The Pixie Pantry is just down the hill. Gee, blogger "A Snow White Sanctum" was right when he commented yesterday about Santa's elves having their hands full with reindeer, donkeys and goats! Not to mention children! 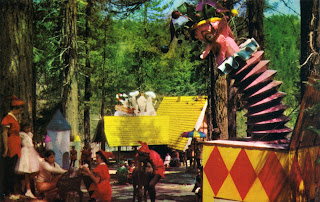 Again, here's the map and an aerial photo to get our bearings. 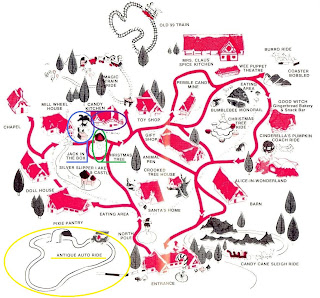 I've also circled the Antique Auto Ride because I believe the path it followed can be seen in the aerial photo below. It looks like there is at least part of a concrete road sitting just beyond the Pixie Pantry building.....which corresponds with the Antique Auto Ride's location on the map. 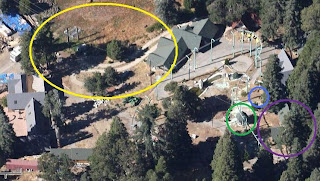 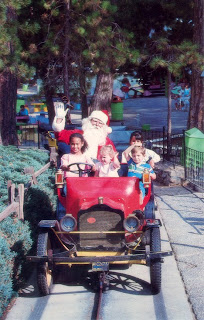 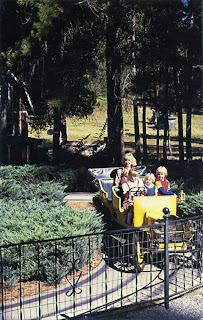 Check back tomorrow for Part 6 of this series. Only two more parts to go! Or maybe three!
Posted by TokyoMagic! at 12:01 AM

Man these images sure make me sad. I have really great memories of trips to Santa's Village as a kid. I grew up in San Diego, but we made about two trips a year.....a Summer and Winter...One thing that is embedded in my memory is the smell of pine trees and crisp cool air--even in the Summer. Great posts.

It just amazing that the xmas tree behind glass still stands after all these years. The presents look a bit grody though...they didn't hold up so well. This place feels like a scene out of some apocalyptic movie starring Will Smith or Bruce Willis.

The giant jack-in-the-box doesn't help either. If I were a kid of six, that thing would have scared the bageebees out of me. That Easter Bunny and Pumpkin head too...although he's hilarious there in the photo, kicked back upon the ground as guests walk by. :)

Thanks, Mike! Man, I wish I had gotten to see this park before it closed!

SWS, It would be a great site to film a movie. I think they used the property to film an X-Files episode back in the day.

My gosh, I am way behind on
"Meet the World" posts! I assume that the Christmas Tree Under Glass was supposed to look like a giant ornament? My mom used to have some plastic ornaments that looked very much like that.

Major, I forgot about those ornaments! I've seen them and I think they were from the 50's and 60's. Some of them were shaped like little lanterns and had little plastic figures or scenes inside of them. That is probably what they were going for here.