In the early sixties, the very first suspended monorail system in the United States was built at Santa's Village in Skyforest, California. The Bumblebee Monorail gave guests an aerial view of the park while riding in suspended bee-shaped vehicles. 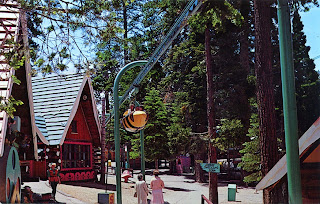 The map below, shows the monorail route. I've highlighted the path in yellow since it didn't show up very well in the scan. 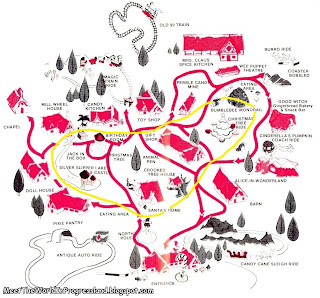 Here we see a monorail car traveling past the spinning Christmas Tree Ride. 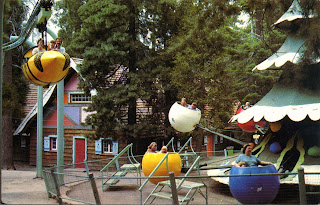 Well, today the Christmas Tree Ride is long gone. You can see the old railing that used to surround it in the photo below. The Bumblebee Monorail however, is still standing....cars, track, station and all! This shot was taken from pretty much the same angle as the one above....just several yards further back. How sad is this photo? Look away if you want to, because it only gets worse from here! 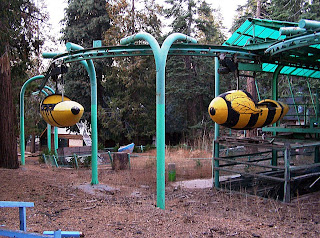 Here's a better shot of the station. The piece of track on the right is a spur that leads to a storage area. The track outside of the station does not seem very high compared to the first two vintage photos. I wonder if there was originally some kind of fencing in this area to keep guests from being hit by the cars? 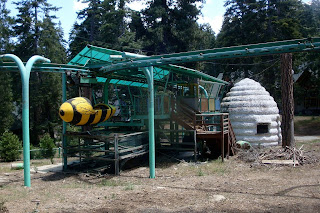 This car is in a perpetual state of "entering" the station. 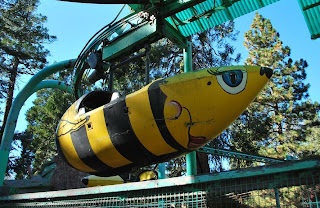 Step right up to the beehive-shaped ticket booth to buy your monorail ticket! 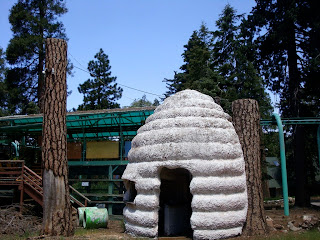 There are more cars parked on the spur track in the storage area. 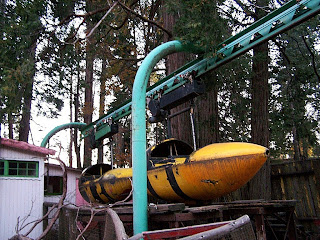 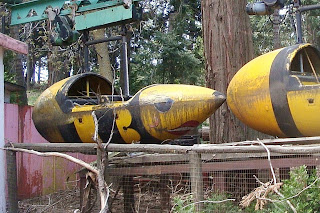 These two cars have been left hanging high above another section of the park. 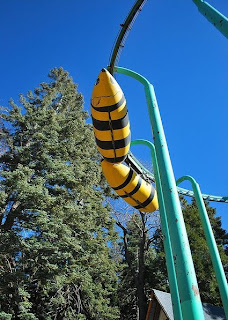 The track layout can be seen in this aerial view. 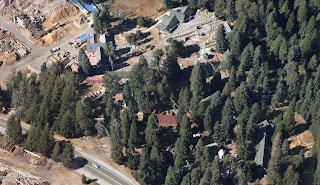 Zooming in closer, we can see the station and the beehive ticket booth. Also, if you look just to the left of the station, you can see one of the cars suspended among the trees. 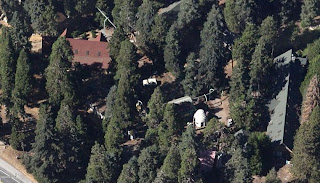 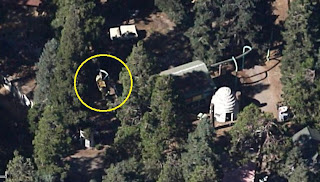 Once again, I will leave you with a happier image of the park during it's glory days. If you compare this photo of the Christmas Tree Ride to the other one, you will notice that many of the decorations were removed from the tree. Also, the ride vehicles lost their detailed paint jobs at some point. 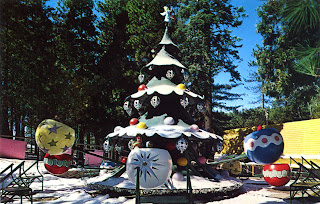 Tune in tomorrow as we venture deeper into the remnants of Santa's Village!
Posted by TokyoMagic! at 12:01 AM

Tokyo, these are super shots. It's rather eerie to see these stranded bee cars just hanging there motionless. I can almost hear the echoed voices in the pines of happy kids and families from an earlier time.

Did you shoot these recent photos yourself? If so, were you able to walk about the property while the loggers were there? Or was no one around?

Yes, how the heck did you get those photos? Amazing stuff, and as sad as it is to look at, you did a real service preserving this stuff in pictures. It's surprising to me that no other amusement park purchased the bumblebee monorail, I'd still want to ride it.

Meanwhile I just looked at Google Maps, and see that Santa's Village would have been a nearly 2 hour drive from where I live now (much further than Disneyland), and almost 2.5 hours from where I used to live. No wonder my family never went!

SWS, Yes, very eerie. I did not take these myself. It is private property and there are "no trespassing" signs posted as you can see in one of the photos from yesterday. I don't know if I would be brave enough to poke around the site.

Major, after the park closed, there was an auction held for the rides and some of the smaller buildings and items such as the cement mushrooms. I read that it was going to cost too much to dismantle and relocate the monorail, so I'm guessing there were no bids on it.

I think distance was also the reason my family never went to Santa's Village. :-(

Thank you TM for posting these pictures, even though they make me sad.

@SWS, one of those voices you hear echoing is mine. I remember my visit with great clariy, it was winter and remarkably cold. My pictures, graciously published by Major Pepperidge show the snow on the ground, very seasonal.

But we never went back. I think we went by SV on the way to or from the Rose Bowl Parade on our single visit to that event. My Dad's cousin had tickets one year from his job. I still have the photos of the parade too.

SV is "sort of" on the route from where we lived to Pasadena, so it makes sense that we were there in winter. My photos were dated December. But SV is way way out of the way for us to combine with a trip to Disneyland.

Katella Gate mentioned once that the Bee Monorail was very noisy and prone to breakdowns. That and the cost of relocation probably explain why it's still there.

Wow, I love that Christmas Tree Ride! I wonder if Holiday World in Santa Claus, Indiana has ever had this. If they haven't, they should!