Today we have two photos from the 1996 New Year's Eve party at Disneyland. Walt was sporting what I like to call a "trash hat." The park used to give these hats out to guests on New Year's Eve. I call them trash hats because they were made up of shrink wrapped scraps of paper and cellophane. I wonder if they still pass these out? On this particular night, someone had managed to get over to Walt and place one of the hats on his head. Funny or sacrilegious? You decide! 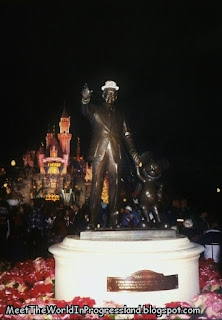 The photos today were taken the year of the Disneyland New Year's Eve "Flower Trampling" incident. We were in a pretty safe situation....and so were those poinsettias seen around Walt and Mickey, because this was actually "the eye of the storm." Things stayed calm in the dead center of the Plaza where we were located while everyone was going crazy around us. I mentioned the incident in my Disneyland Millennium New Year's Eve post from two years ago. Here's the part about the flower trampling:

"The last New Year's Eve that I spent at Disneyland was in 1996 and it was so unbelievably crowded that I haven't attempted it since. It seemed like the entire park was packed into the Plaza for the midnight countdown and fireworks. Afterward, it was complete gridlock in the Plaza and surrounding areas and it was taking forever for the crowd to dissipate. People got very impatient and eventually just started climbing over railings and trampling flowers to get out of the area. It was a little scary!"

According to the clock on the Castle, the previous photo was taken at 11:23 (and 02 seconds!) It really doesn't appear to be that crowded around us.....but it was! Oh, and you can see two people in the crowd wearing their "trash hats."

Here's a close-up of the signage on the Castle. This was actually taken earlier in the evening as shown by the clock. 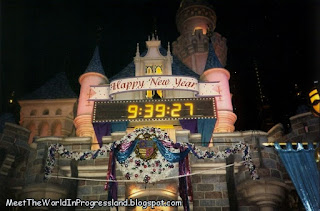 Well, I will not be going to Disneyland tonight for New Year's Eve....and you can't make me! I'll be spending the evening at a much smaller-scale event. I hope everyone has a safe and happy New Year! (To see some Disneyland New Year's Eve ephemera from 1980 and 1981, click here.)

Great memories, albeit a little stressful from the sound of it. Good thing you weren't in the path of the flower tramplers. Happy New Year TM!

Oh...by the way, I think Walt looks rather dashing in that trash hat. :)

I had no idea they put a clock up on the Castle for New Year's; wonder if they still do it. I also wonder how long that hat stayed on Walt before someone removed it! Happy New Year, Chris!

Where do those trash hats come from? Does somebody actually manufacture cheap hats made from shrink wrap and bits of paper?!? From now on I am going to have to work the phrase "trash hat" into my sentences on a regular basis.

Happy New Year, one and all!

SWS, Yeah, lucky for us we were in the center and everyone was heading outward, away from the Partners statue and us. I do remember when we got out of the Plaza and near Tomorrowland, people were still climbing over things...including the two large Tomorrowland entrance planters which are no longer there. It was THAT crowded! Oh, and I thought the hat on Walt was kind of fitting for the evening!

Dave, I've been wondering what they do now for New Year's Eve myself, but haven't been interested enough to go back. I guess I could check it out earlier in the day before the crowd gets too ugly. Maybe next year! The hat stayed on Walt for quite a while, but I think as soon as the "gridlock" cleared up and an employee was able to get over to the statue, it was removed.

Major, the trash hats probably come from trash hat elves working in a trash hat factory located inside a tree somewhere. Knott's used to pass these out for New Year's as well. I may still have several of these. I have to go over to my mom's and look for them. I usually save everything, but it is possible that I could have decided at some point to thrown them out....they were basically trash, you know! If I can find them, maybe I'll wear one to Dapper Day!

I've been going for several years and actually enjoy it! Of course, I go with the mindset that I'm not riding on anything other than the train, LOL. We pick a spot, sit down, play some card games or whatever and sit and talk. The count downs are held in three seperate areas now: Frontierland/NOS by the river, the Hub and Tomorrowland. Each has a countdown clock. Dave, no clock on the castle. The only reason I didn't go into the Park this year is because I was the only one in my group with a pass and I felt bad leaving them behind, LOL.