Once upon a time in Southern California, residents and tourists alike could "Enjoy A Fun-Filled Day At Santa's Village!" Santa's Village was located in Skyforest, near Lake Arrowhead and opened in 1955....six weeks before the opening of Disneyland. The park operated year-round for 43 years before closing in 1998. 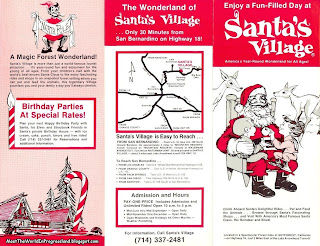 Unfortunately, I never made it to this park. I remember seeing the television commercials as a kid and hearing how guests could eat at the "Pixie Pantry", visit the "Good Witch's Bakery" and ride the "Bumblebee Monorail." I really wanted to go...but alas, it never happened. The closest I got was during a family trip to Big Bear Lake. We had passed it on the drive up, so on the way back down the mountain, I asked my grandfather if he would pull over so I could take a closer look. My grandfather was always a good sport. He pulled the car over and even though the park was closed, I was able to peek through the fence at the colorful little buildings all trimmed with "gingerbread." Around that same time....actually, it may have been during that Big Bear trip, I was able to pick up a brochure for the park and I have kept it all these years. 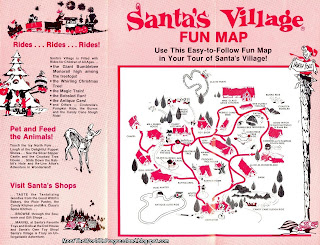 Here's a vintage postcard showing the entrance to the park. When I saw this building in person, it was almost completely covered with shade from the growth of trees that had popped up around it. Gee, now I'm wondering why I didn't take a picture of it. I do have pictures from that trip and this is definitely something that I would have taken a picture of back then, so maybe I had run out of film. 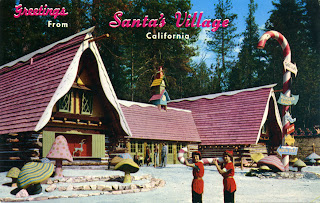 So what happened to Santa's Village after if closed in 1998? Well, a developer bought the property in 2001 and began refurbishing the buildings with the intention of reopening the park, but he died in 2005 before the project could be completed. Today, a logging company has taken over the property. If we look at an aerial photo, we can see the former Santa's Village parking lot filled with cut timber. 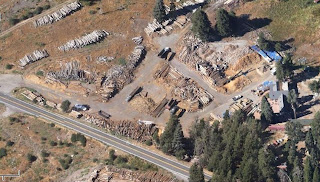 Let's zoom in closer, shall we? Wait a minute....that building on the right looks like it could be the old Santa's Village entrance! 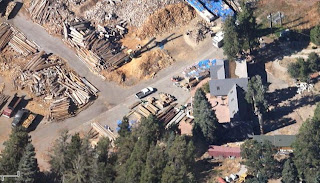 If we zoom in even closer, we can see what looks like part of a giant candy cane out in front.....it's even casting a cane-shaped shadow onto the ground in front of the building. Am I just imagining it because I want to see it? 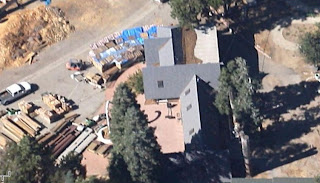 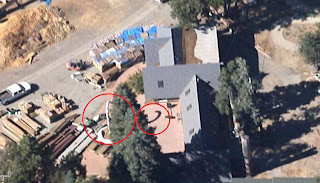 Nope, both the entrance and the giant candy cane are still standing! 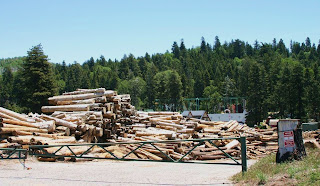 It looks like the portion of the building on the far left has been added to the original structure....maybe that was part of the refurbishment that took place before the plans to reopen the park fell through? And what's that green apparatus standing behind the entrance? Could that be a remnant of the old Bumblebee Monorail track? And what about those other buildings that are visible? 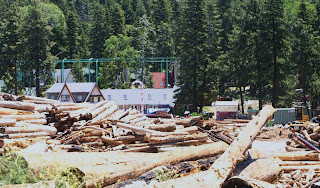 Well, for those that want to see what else may still exist from the park, including items that made their way to other Southern California tourist spots, stay tuned! I plan to do a Santa's Village post every day between now and Christmas Day! For now, I will leave you with another vintage image of the entrance. 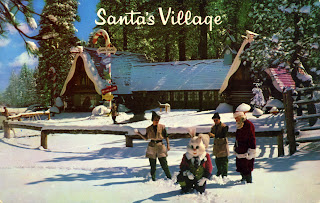 Oh yeah, and it appears that the Easter Bunny lived at Santa's Village too. Who knew?
Posted by TokyoMagic! at 12:01 AM

A logging company takes over Santa's Village? Is nothing sacred anymore! :) Kind of a sad end to quite a long run for the park.

I remember once as a kid on a school field trip, I visited some amusement park that was also called Santa's Vilage, but it was somewhere in northern Indiana.

SWS, The owners of this Santa's Village built another one in California, near Santa Cruz (opened in 1957 and closed in 1979) and one in Dundee, Illinois, a suburb of Chicago (opened in 1959 and closed in 2006). This was supposedly the world's first "chain" of theme parks, but there were definitely other "Santa's Villages" around the country with different owners. I wonder if the one you visited is still around today?

Oh Thank YOU for posting these. I have been dying for a map of SV. Between these photos and those on GDB, I am going to try to pinpoint the vistas and figure the lay of the land here.

I only visited once, but it left a pleasant and vivid memory. Thanks for helping recall it for me.

Re Photo 7, that green rail and tower structure behind the building is definitely the monorail track, the color and shape is the same as in the period pics of that device.

Think of the young offspring of the people responsible for tearing this place down.

JG, I'm glad I could help. I knew I had a map stored away somewhere! Oh and check out Part 2 of this series for more info and pics of the monorail!

Dan, this Santa's Village wasn't exactly torn down....but the Santa's Village in Santa Cruz was so yeah, I think the parents might have kept the fact that Daddy razed Santa's House, Toy Shop, etc. from the kids!

Wow, this was fascinating! I've never seen that flyer before... seems that an earlier example is much more common. Why didn't I ever think to use Google's satellite view to look at the site? I love that the candy cane is still there, even though it is a sad spectacle, in a way.

CORRECTION: In my comment above I mentioned that the Santa's Village in Dundee, Illinois closed in 2006. It appears to still be open (or maybe it reopened) and is called Santa's Village AZoosement Park now.

Hi there!
My name is Jane and I'm with Dwellable.
I was looking for blogs about Big Bear Lake to share on our site and I came across your post...If you're open to it, shoot me an email at jane(at)dwellable(dot)com.
Hope to hear from you :)
Jane

omg Some of my best childhood memories were at Santas Village (ca)! So sad its closed would have loved to take my grand daughter there!

My daughter and her friends grew up at Santa's Village. There were dance performances every year that they performed in. Then there were the local field trips, as well as visits every so often to shop. Sure miss the place and it is painful to drive by and see it in such dismal shape.