It's time for another vintage trip report! The date was July 17th, 1981 and it had been 8 months since I had gotten my driver's license and drove to Disneyland for the first time. Actually, by now I had already driven myself to the park several times, but this was a special day because it was Disneyland's 26th birthday. It didn't matter that they weren't doing anything special at the park like they had the year before for the park's 25th birthday. Just the fact that it was July 17th made it special enough for two huge Disneyland fans like myself and my friend, Alvin.


Pearl Bailey was appearing on the River Stage in Frontierland! She was the voice of Big Mama in The Fox and the Hound and she sang "The Best of Friends" in her Rollin' River Revue. She was fantastic!

The map portion of the guide folds down for more entertainment info. Hey, it's the "Small World Character Parade"....we have to see that!


This was the only thing special that was done to acknowledge the 26th birthday. Cast members were given these tags to wear along with a carnation. After playing dumb and asking several cast members, "Hey, how can we get one of those?", a cast member in the Candy Palace took hers off and handed it to me saying that I could have her tag and that she just wanted to keep the carnation! This was a major score at the time for a Disneyland fan and collector like myself. Remember, there was no eBay back then!

So we're starting out the day the way that we usually began our visits to the park....by entering Tomorrowland first (after Main St., of course). Tomorrowland was the coolest of all the lands and it was my very favorite land from childhood all the way up until 1998 when they, uh....oh never mind! I see the handiwork of Mary Blair off in the distance.....but where is E.J. Peaker? And you have to love the ameoboid bowl planters at the entrance (which were once actually fountains....REALLY!) 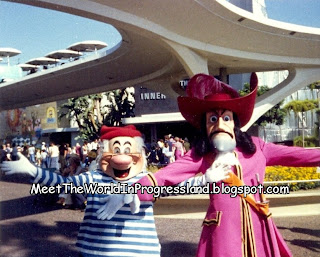 After riding Space Mountain (because we always went on Space Mountain first back then), we'll take a spin on the Tomorrowland Autopia. The PeopleMover track is overhead, and this yellow car appears to be driving itself through the course.


Wheeeee! A ride on the Skyway and YOU ARE THERE! 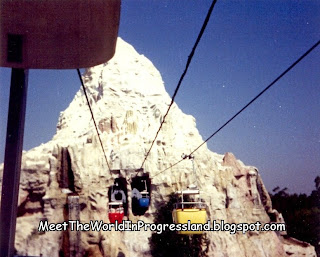 After passing through the Matterhorn, I took this shot of a bobsled racing below us on the Fantasyland side.

Now we'll take a ride around the Rivers of America on the Columbia Sailing ship. Big Thunder Mountain can be seen in the background. It would have been only two years old here, but even then I would have traded it in to have Nature's Wonderland back!

We have reservations for the Golden Horseshoe Revue. We can't miss that!

They've seated us in the balcony! By the way, these pictures were all taken with my Kodak 110 Instamatic Camera and this particular photo was taken using a handy dandy Kodak Flip-Flash. Hey, where's Betty Taylor? 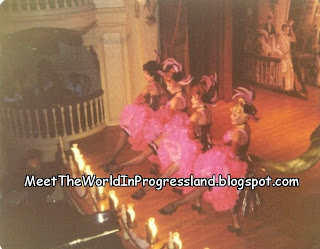 I'm not sure which country Snow White and Dopey were supposed to be from, but Snow White is wearing a wreath of flowers in her hair and an embroidered apron of some sort. This was one of the earliest uses of the newly designed Dwarf costumes. Prior to this they had used the very large disproportionate costume heads.

Hmmm, these four don't seem to be wearing anything special. I do remember there also being a Latin unit and the dancers and the characters were wearing ruffled sleeves....sorry, no pictures of them.

A shot of the Castle always has to be taken when you're at Disneyland, right?

Here's the old Alice facade. I kind of like the vintage attraction poster on the cover of the book instead of what is there now, but that's just me. 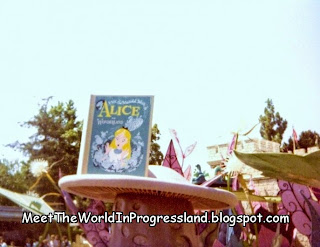 Last up on this trip, we'll take a ride on the original version of Snow White's Adventures (Scary!) Watch out for the Witch! 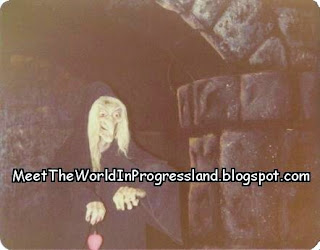 I hope everyone enjoyed this vintage Disneyland trip report from July 17th, 1981!


Happy Birthday, Disneyland!
Posted by TokyoMagic! at 12:01 AM

I love seeing Fox and the Hound stuff from the parks. And this is the first time I've seen a picture from inside the original Snow White dark ride. Great retro-report!

That was a blast!

My only memory of the Country Bear Hoedown show available that Summer was being in New Orleans Square in front of the Mansion and seeing two cast members dressed in county garb skipping hand-in-hand towards Bear Country and announcing enthusiastically to the crowd that they were "On Our Way To The HOEDOWN!!!" and that all the people they were skipping through should join them there. This was when Bear Country was kinda desolate and lonely at night; it seemed like nobody went there after dark (and as far as I could tell nobody in the crowd followed them...)

Anyhow, thanks for the memories :)

Thank you everyone for the compliments! I enjoy doing these vintage trip reports and will try to post more....I have tons of personal DL pics from the 70's, 80's and 90's.

Walterworld, I remember the Bear Country Hoedown. Unfortunately, I never took any photos of it, but I do remember sitting on the ground and watching the performers dance. After a couple numbers, each of the performers would grab someone from the crowd and teach them how to square dance and then they would use those people in their next number. I got picked several times because there were always people that were unwilling to go out there. They should bring that show back!

Wow, what a great bunch of photos, these really take me back. Wish I had lived close enough to the park to drive there in my early-driving years.

Loved this!! Fond memories indeed. I was a performer in the Rollin' River Revue 1981 and boy do i have stories... did a few hoe-downs in bear country and remember todd and copper in the electrical parade that summer. And you are preaching to the choir about the, well,new tomorrowland. And the spectacuar space mountain complex, speed ramp, open air amphitheater, kids of the kingdom.... a kenetic place..the place to be. Now,your lucky if you get past the french fry bottle neck. (Sorry, it's passion)... anyway, all these years later, i am still here and have many more stories to tell. Sadly, there is almost no record that the Rollin' River Revue ever happened... but, we were there and thanks for sharing. There is a photo of a few buddies on the mark twain between shows on my instagram. Feel free to visit and say hello.

Mickey, thank you for commenting! I'm glad that you enjoyed this post. If you are still there, then I bet you do have some really good stories! I would love to hear more about what it was like working there back in the day. I remember the Bear Country hoe-downs.....I was picked more than once from the crowd to participate and I loved it. I will definitely have to check out your photos!