Well, it's official. Disney has announced that the waterfall area at the Disneyland Hotel will be removed and replaced with grass. They have said that the waterfalls use too much water and electricity (Hello...what about the brand new World of Color???) Anyway, I thought I would go visit this area one more time before it disappears forever.

I have fond memories of going to the hotel with friends as a teen, when we didn't have the money to go into Disneyland. Annual passes did not exist back then, so we couldn't just go into the park anytime we wanted to! We would hang out at the Hotel, walk around the waterfall area, look in the shops and sometimes buy a ticket for a round-trip on the Monorail (they would lock you in the rear nose of the train and the door would NOT be opened when it reached the Tomorrowland station. To a huge Disneyland fan, it could've been considered a form of torture.)

Speaking of the Monorail, let me begin this post with concept art from Disney for a planned water slide area at the hotel. 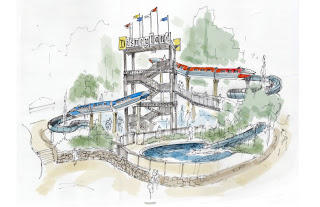 Disney has announced that this will be a new addition to the existing pool area at the Hotel. The top platform is supposed to be reminiscent of the Hotel Monorail station with a replica of the old Disneyland signage above. The slides will include recreations of original monorail cars, which guests will actually "slide through" on their way down.

The postcard below is borrowed and used with permission from Don Ballard. Check out his blog and his website. I highly recommend his book, Disneyland Hotel, The Early Years 1954-1988, which can be purchased on his website, and he is currently working on addendums to his book which will be filled with additional info and images that he has aquired just since writing his book. 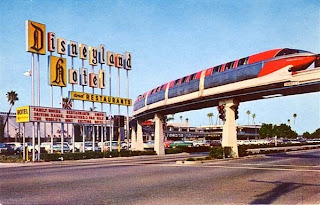 The following concept art from Disney shows the placement of the waterslide area (almost direct center.) It will be connected to the existing Neverland Pool, which will retain it's current shape, but it too will be getting a make-over. If you look to the south of the waterslide area, you will see a grassy area just in front of the soon-to-be Frontier Tower (formerly the Bonita Tower and currently the Wonder Tower.) This is the spot where the Hotel waterfalls have existed for the past 31 years. 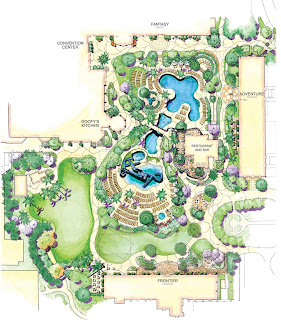 Here's another postcard courtesy of Don Ballard, that shows the location of the waterfalls (circled in red.) 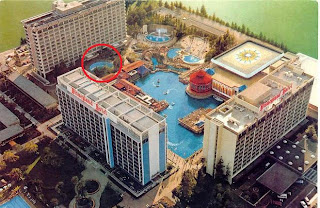 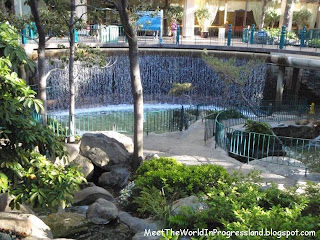 There are multiple paths that lead down to, and actually underneath the waterfalls. 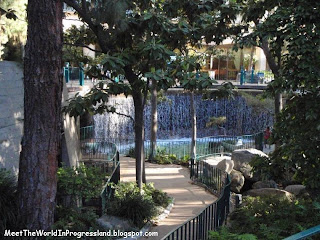 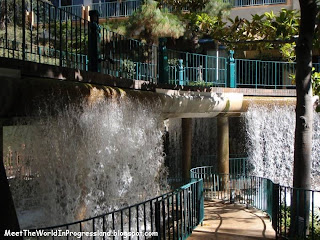 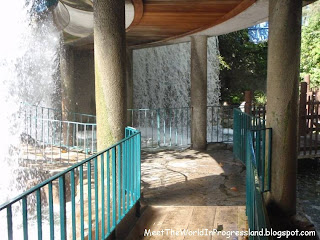 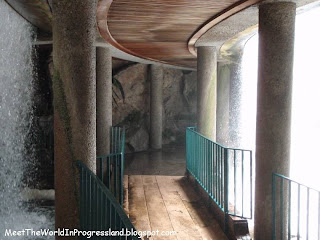 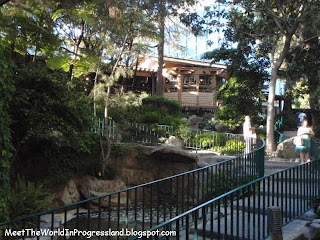 There are some smaller waterfalls as well. That building in the background is a remnant of the old Seaports of the Pacific Shops at the Hotel. We'll take a closer look at that building in a future post. 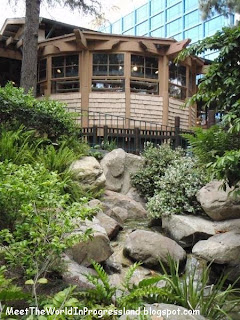 There is also a "hidden" cave located in this area. 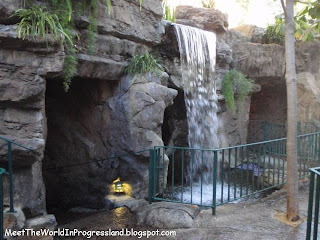 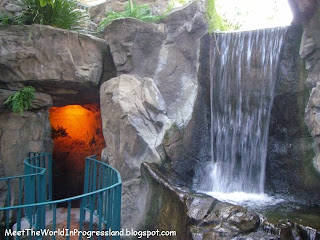 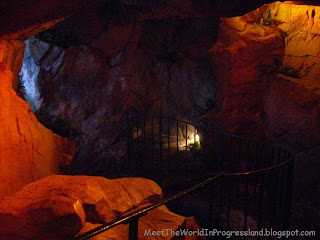 It's kind of like Tom Sawyer Island! It even smells a bit like the caves on Tom Sawyer Island if you know what I mean!
The next shot is from the same angle as above, but was taken with a flash. 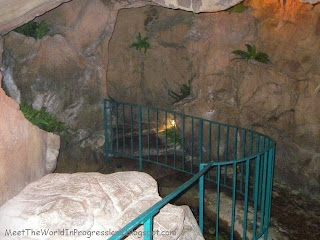 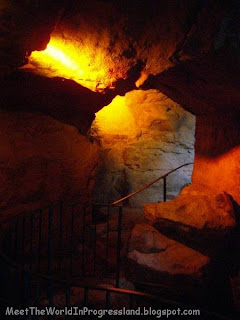 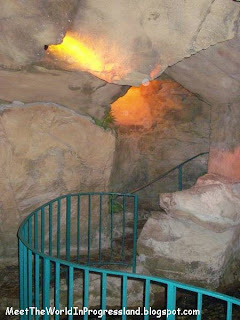 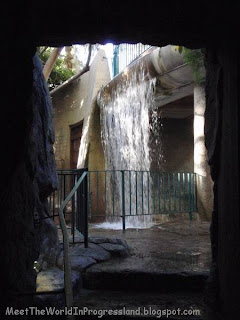 This section of the Hotel property really is beautiful. It's a shame Disney feels a need to get rid of it. 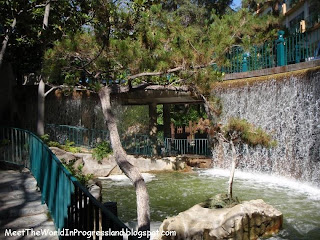 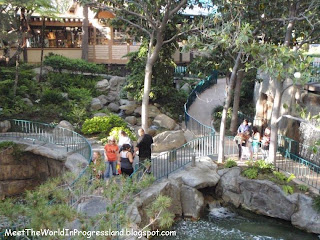 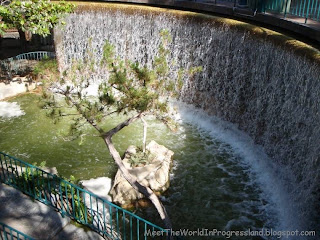 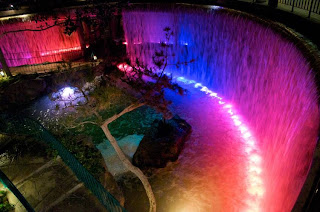 I'm not sure when this area is scheduled to close. I have been given different information each time I've asked a CM. If you've never seen these waterfalls, or haven't seen them in a while, you might want to go check them out before they're gone forever.
In part two of this series, we'll take a look at the Hotel's Koi Ponds and Dancing Waters. Click here to read that post now.
Posted by TokyoMagic! at 1:15 AM

Thank you so much for sharing these photos!

I can't believe that I never made it over there on my three trips to Disneyland.

So,... Disneyland is replacing the beautiful waterfalls and gardens with.... NOTHING. And they're replacing the Dancing Waters/Fantasy Waters with,.... NOTHING! And of course the Ports of the Pacific Shops and arcade are being replaced with,... NOTHING! How is this progress?

Ooooo, pretty pictures (especially the nighttime ones)! It's a shame that this is being changed.

Chris, I think they call that "plussing"...

I got to visit the hotel and its waterfalls once, on my last trip in 2006. I found them quite charming and its too bad they are going to be demolished. Good Lord, even if they just turned off the waterfalls and kept everything else as a nice alcove that would be better, if they were really so concerned.

Guess this isn't much of a surprise. Unfortunately they're doing what too many places seem to do these days; replace the unique with the pedestrian.

Frustrating isn't it? I was thinking the same thing about them just turning off the water and leaving the rocks, the cave and the landscaping. And what about all those 30+ year old trees? I wonder if any attempt will be made to save them?

Thanks for these, Chris...

I was unaware of this area until reading about its removal; I would love this place! I agree with Mr. Jepsen... here is a lovely, unusual place for quiet (except for the pleasant sound of falling water) thought, and they are replacing it with GRASS.

Yes, turn off the waterfalls, or just have them running at certain times. I never fully believe the stories. How many tens of thousands of dollars is it going to cost just to remove it? ARG.

Good post! I guess this area is on the minds of all Disney Geeks because I did a series on the same area a couple of weeks ago. Really enjoy your blog.

August 18th was the last day of the falls. Construction walls have been in place since ... but the falls themselves remain - for the moment. But it's important those who care enough .. to make as much noise back to Disney .. as much as possible. But not just to them ... but to as many friends, and family, and the general public. Because the more people know of this inane decision to remove the falls in favor of a GRASS LAWN .. the better! Because only after then may Disney reconsider what they do, before it's too late!

When we went there during out stay at the hotel, I couldn't help but wonder how many wedding pictures had been taken there over the years. I know time doesn't stand still, but I really miss that gem of a location.

A heartfelt appreciation unto you for this post. My first French kiss was underneath these waterfalls.