Today happens to be the 41st anniversary of Knott's Berry Farm's Calico Log Ride. My family went to Knott's that Summer of 1969. I was only four years old, but I do remember standing in the crowd and watching the logs go down the flume one after the other. Everyone was fascinated by this. I don't remember how long the line was, but I did not get to ride it that day.....it would be one more year before I would get that chance.

My dad took all of the vintage photos in today's post and I took all of the current ones within the last month or so. This first photo is from that trip my family took to Knott's in the Summer of 1969. The Log Ride would have been only about a month old here. Look at all the fresh lumber used on the flume and the loading station. Also note the employees on the mountain. There is one sitting next to the flume at the top of the drop. I remember there always being an employee stationed there in the early years. I assume this was to make sure everyone was sitting down before the drop, but in later years the employee was replaced by a recording that would say quite loudly, "Sit down over there!" There is another employee standing on the rockwork just to the right of the flume and another standing at the bottom of the drop (visible between the two men's heads on the right.) 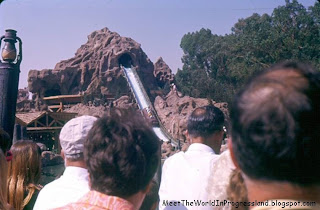 Here is the view while standing in the same spot today. There is actually a real pine tree in there among all the fake ones and it has now grown so big that it blocks the view of the mountain from this angle and most of the flume too. 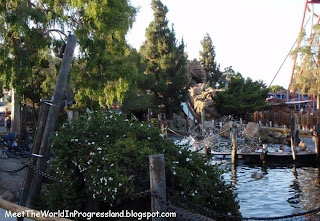 Here are two more "Then" and "Now" shots. 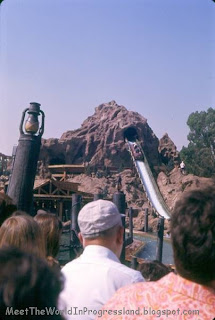 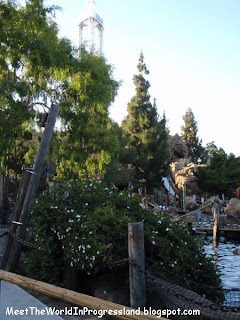 In order to get a clear view of the opening at the top of the mountain and the drop, you now have to stand over by the train tracks in Calico Square. There's that pine tree again. I'm surprised it's still there given Knott's current track record with trees. (By the way, the sappling that replaced a 40+ year old tree next to the Cable Car Kitchen/Pink's earlier this year, has already died!) 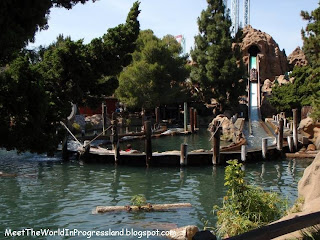 Now, let's actually go on the Calico Log Ride. Before boarding, riders see this plaque which hangs over the loading area. I thought the Log Ride was built and run by Bud Hurlbut! 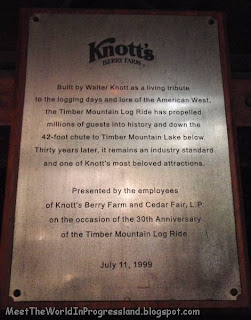 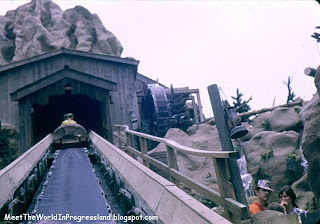 I tried to recreate the shot that my dad took 40 years ago. 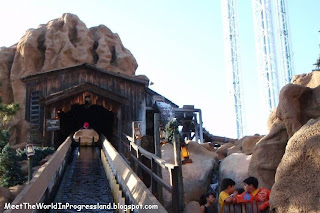 My dad turned around very quickly and took another shot looking down the lift...... 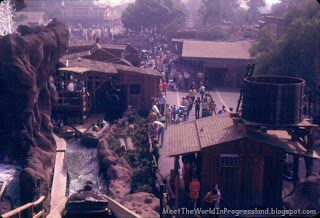 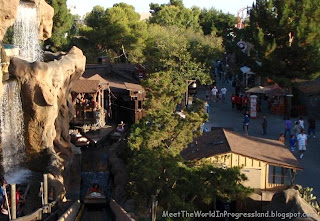 Here's another shot from 1970, taken while floating along past Fiesta Village. For some reason, I have very clear memories of those stationary boats in Reflection Lake.....and the monkey cage which can just barely be seen over on the left. For a better view of the monkey cage (click here) for another great photo from Gorillas Don't Blog. 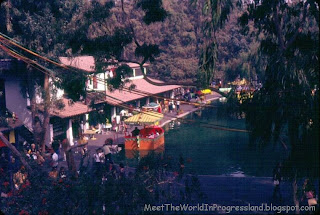 Here's a current pic taken from the same spot. No comment. Really! But of course, I am dying to make one! 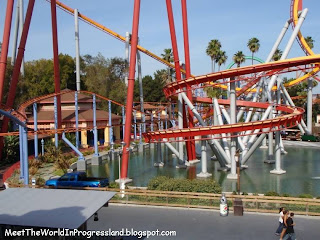 Happy anniversary to Knott's Calico Log Ride! May it still be standing in another 41 years!
Posted by TokyoMagic! at 12:01 AM

Excellent post - love the before and after shots (although not necessarily the changes, but the photos themselves are cool!).

Yes, "before and after" = cool! I generally love trees in amusement parks, but it does seem strange to have one blocking such a great view. Happy Birthday to one of my favorite rides ever!

Great post. Although we made many trips to KBF growing up in nearby La Mirada, I never went on the log ride. We used to walk Knott's just hanging out on weekends.
What year did they start charging admission to part of the park??

Thank you for all the compliments, everyone!

That's one of the best non-Disney log rides I've seen (though I guess in this case, Disney may have been a bit inspired by Knott's).