Today we're back at the Disneyland Hotel. This time we'll be taking a look at the area just west of the waterfalls. Here's that postcard again, courtesy of Don Ballard. The area circled in orange is the hotel's Koi Ponds and the area circled in yellow is the site of the former Dancing Waters arena. 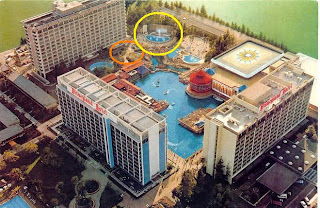 We'll look at the Koi ponds first. In the photo below, we're standing between the Wonder Tower and the hotel waterfalls, looking towards the Koi ponds. 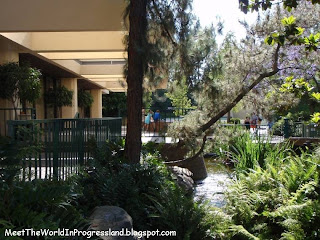 The kids in the center of the photo above, are looking into the tiled pool of water seen below. Gotta love that brown tile from the seventies! The water from that pool spills over into the lower pond. There is a gate that can be seen straight ahead which leads to a platform hanging out over the water. I'm assuming this was used for feeding the Koi? 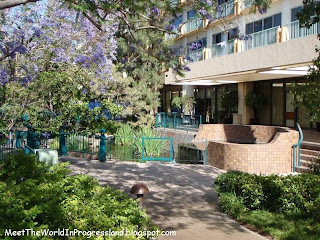 We're a little further down the path now and there are Koi ponds on both sides of the walkway. The sunken waterfall area that we saw in my last post is straight ahead at the end of the path. Remember, all of this is going to be replaced with......as Chris Jepsen commented after that last post, NOTHING! It will actually be replaced with grass, but yeah.....NOTHING! 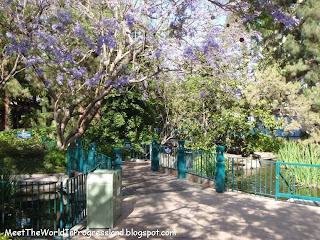 This is the view just to the left. That building in the background is another section of the old Seaports of the Pacific shops, which we'll take a look a closer look at in my next post. 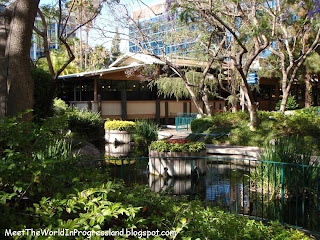 Here's a view from the opposite end of the pond. That path to the right of the railing is off limits to guests. Again, I'm assuming this was used to feed the Koi. 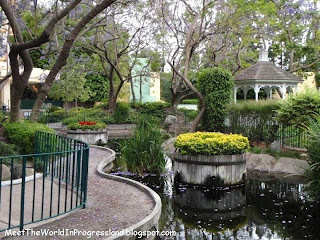 The Jacaranda trees are in bloom again.....really they are! Hey, what's going to happen to all these trees? Oh wait, I forgot....they'll be replaced with grass. That sign on the railing reads, "Please Do Not Feed The Koi Fish Or Throw Any Objects Or Coins Into These Pools. Thank You." 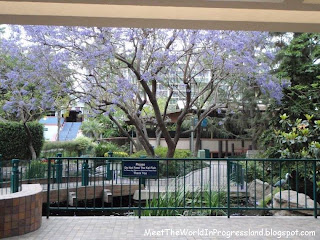 And here they are up close and personal, the Koi fish. I was told by a hotel CM that they were all packed up a few weeks ago and taken to the Huntington Library in Pasadena. Well, not all of them. She said there were a few that were hiding and that still remain in the waters. I don't blame them. If this was my home, I'd want to stay behind too! I hope they won't be forgotten by the time the bulldozers come in. 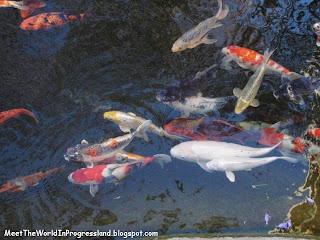 Just next to the Koi ponds are the remnants of the old Dancing Waters Show. Although I never stayed at the Disneyland Hotel, I remember going over to the hotel many times in the evening to watch the water show. I really can't believe this all still exists. Those square panels that are being taken over with vine growth look like they might actually be the square fiber optic light panels used during the show....or maybe they're just what the panels were mounted to. Those light panels can be seen doing their thing (here) over at the blog, Westcot 2000, along with an article from a 1992 Disneyland Line about the conversion of the show from "Dancing Waters" to "Fantasy Waters." At this time, the show went from being manually run by two cast members to being completely automated. 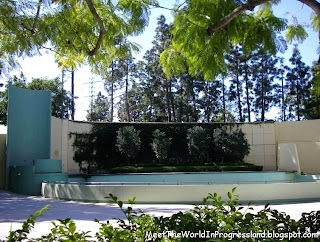 Most of the water jets have been removed, but up until a couple years ago, a small fountain of water shot up continuously from this pool. 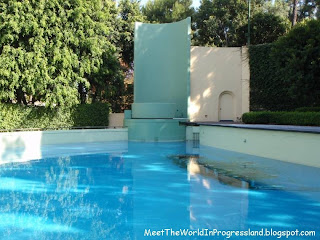 Here's another postcard courtesy of Don Ballard showing the Dancing Waters back in their heyday. 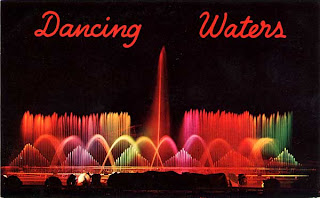 I'm ending the post today with this photo from a 2008 trip to Tokyo. This was a "dancing waters" show at Tokyo Dome City. The music that was used for this show included the theme from "Gone With The Wind" and music from "The Wizard of Oz." 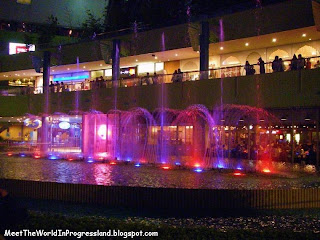 Part 3 of this series focuses on the former Hotel Marina and it's shops and restaurants.....oh, and also the Hotel's Jungle Cruise-themed remote control boats! To view that post, Click Here.
Posted by TokyoMagic! at 12:01 AM

What a beautiful and serene environment.

That better be some kick-ass grass replacing such a beautiful setting.

Off topic, but it would be cool if Walt Disney World's Port Orleans Resort had a giant catfish like the ones on that "River Monsters" show.