Greetings from The Art Corner at Disneyland!

Let me start this post by saying that I don't consider myself a big Disneyland pin collector. I'm being specific here when I say "Disneyland." I actually own more pins from Tokyo Disneyland and Disneyland Paris than I do from the original Disney theme park that I grew up with. Maybe it's because I buy more souvenirs in general when I visit other Disney parks, than I do from the park that's right here in my own backyard.

Well, on a recent visit to Disneyland, I discovered that there had been a special "pin event" about a week before Disneyland's 55th birthday on July 17th. Attendance at the event was limited and after paying to go to the event, attendees could have first crack at a wide array of limited edition pins. About a week after the event, the remaining pins were placed into a couple pin selling locations in the park. I wandered into one of those pin locations during DL's birthday weekend and found just one "regular" pin that I liked, but when I went to pay for it, I discovered the "limited" edition pins behind the counter and ended up buying more than I had planned. Below, are four of those pins (plus a bonus pin.) All of these pins are mounted on replicas of postcards that were once sold at the Art Corner in Tomorrowland.

This first pin features Mickey Mouse as an astronaut. 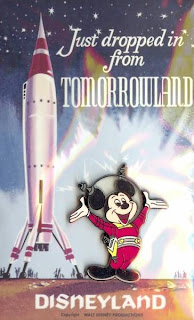 Here's the actual postcard that the pin is based on. Note how the TWA logo has been removed above. Oh, and there will be some glare from the cellophane wrapping on these pins since I didn't open any of them! 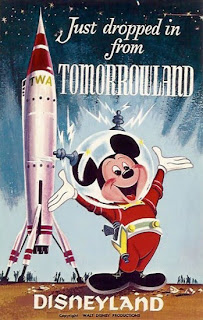 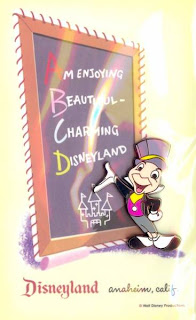 The words, "from the Art Corner" have been removed from the reproduction. 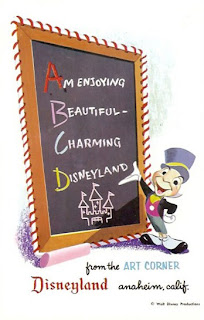 Here are Chip and Dale giving a great big "HELLO!" from Disneyland. (The actual pin is just Dale.) 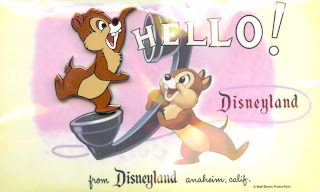 The original postcards have a little bit more detail going on. 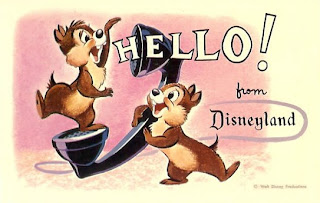 The last one from this set features Lady and the Tramp. 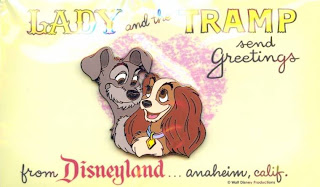 Once again, "from the Art Corner" is missing. Also the paintbrush has been removed from Lady and Tramp's mouths. 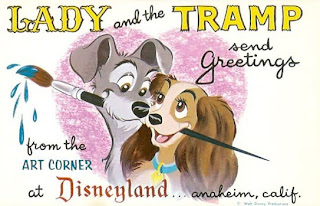 Here's what the back of all four original postcards looked like. Oh, and all of these can be found in the book, "The Nickel Tour" (on pages 208-210.) 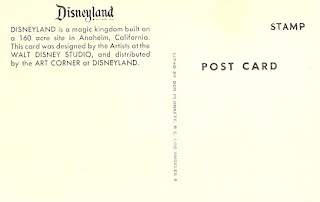 There was also a large postcard that the Art Corner used to sell that featured Donald Duck riding on a train. There was a dial on the side of the card that let you change the hat that he was wearing. The sign in the foreground also changed. 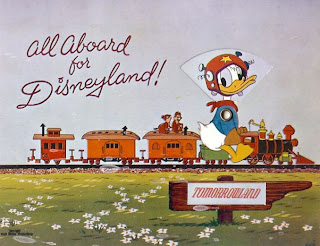 A pin version of this postcard was released for DL's 55th and it also has the dial on the side. I did not purchase this particular pin....I "borrowed" the image from ebay! 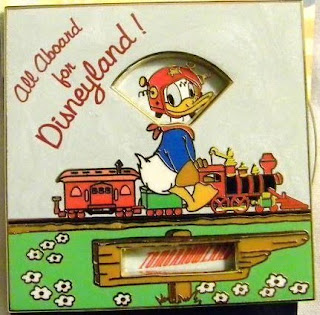 According to this sign in Downtown Disney, pin trading has been going on for ten years now. Gee, and I don't even own a lanyard! 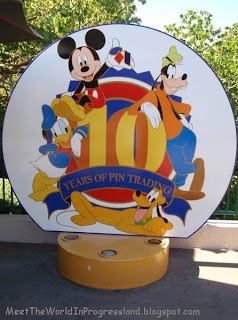 Those are all very spiffy--my favorite is the Mickey Mouse one (very retro)!

I agree with Danno. the first one is my fave also!

I wonder why they removed the mention of the Art Corner? It's historically accurate, and they're not giving free advertising to some other company. Hmmmm

That Mickey/rocket Art Corner card is one of my favorites!

Why don't they make more awesome pins like these? And, like Major Pepperidge said, why did they remove "Art Corner" - and in one case, "Anaheim, California"? I'm sure the answers to both questions are ridiculous.