Glow Fest at the Disneyland Resort!

Well, I went to the Disneyland Resort's "second gate" yesterday for the public premiere of World of Color. I got to the park only five minutes before the start of the second show and a cast member informed me that Fastpasses for all three shows (a third show had been added to the schedule) were gone shortly after the park opened. I was not deluding myself into thinking I would still be able to get a Fastpass five minutes before the show started......it was a very last minute decision of mine to go to the park and attempt to see the show.

As it turned out, I was able to stand right in front of the Victorian "San Francisco" buildings and had a view over the crowd across the way. There was nobody between me and the official viewing area because they were keeping the parade route area clear. Being pretty tall, I was able to see....or at least I feel like I was able to see everything. However, since I wasn't right up in the actual "reserved" viewing area, I am not 100 percent sure that I didn't miss anything. For that reason, I am not going to give a review on the show. I definitely need to see it again, but I will say for right now, that I think I like it better than Fantasmic!
.
So, since I am not going to discuss the World of Color any further (oh wait....they used the old Wonderful World of Color TV show theme song! I liked that!), I am going to post just a few pics of other things that are new at "the resort." 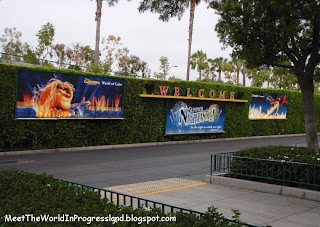 The signs by the trams have been changed. And look, the new logo for the other park is being used already. Hey, where did the "s" go? 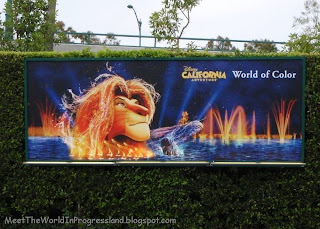 Here's the new cover for the park guide. That crooked font is kind of wacky. I guess they are hoping it will attract many more people to the park than the old logo did. Personally, I would have changed the name completely like they did back in the nineties with "Euro Disneyland" when attendance was suffering so miserably at that park.

Hey.....this summer's going to be NIGHTASTIC! (I hope the new Fantasmic dragon is working across the way at Disneyland this summer.)

Park hours were actually extended to 11:00 last night and as mentioned earlier, a third showing of World of Color was added.

Okay, now this was weird. I saw some of these props in the Hollywood Backlot last Tuesday during the day and thought perhaps they were being used for Grad Nites. It turns out that they are for GLOW FEST, The Ultimate Summer Street Party! (Ends August 22nd.) 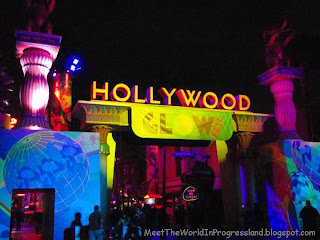 As with the rest of the park, I didn't know quite what to make of it all. 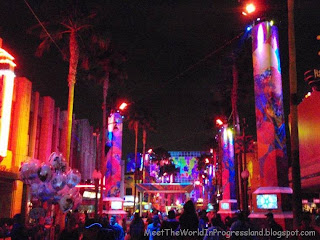 This large interactive screen was in front of the Frank Lloyd Wright bathrooms. 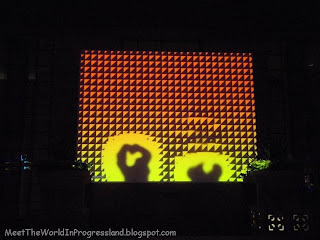 It took me a minute to realize that the "blob" on the left was me. My arms are raised and I'm holding my camera. The blob on the right is a guy that was standing further back and placing his hands together. 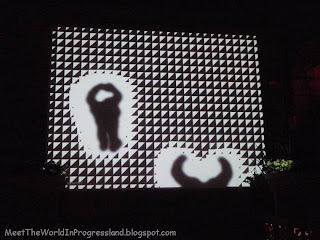 The third blob was a child sitting on top of his father's shoulders. Weird, but fascinating at the same time! 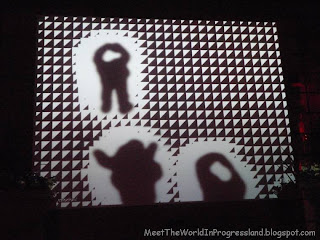 There are smaller screens all along the street with trippy changing kaleidoscopic patterns. I think I see Ellen Degeneres in this one. 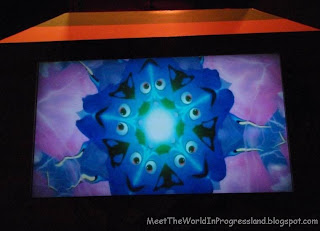 Here are Bambi and Flower. 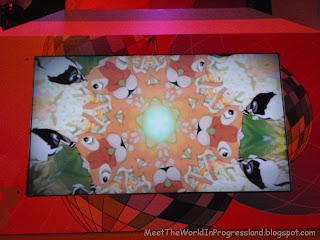 I told you the patterns get trippy. 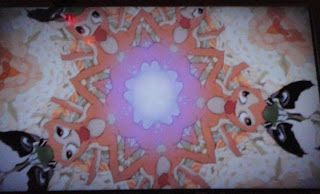 This Volkswagon Bus was parked in the middle of the street, on top of the newly installed Red Car tracks. There was a hole in the roof with a turntable and other sound equipment on top. I'm guessing that a DJ pops up out of the rooftop and plays music at some point. There was already very loud music playing up and down the street. 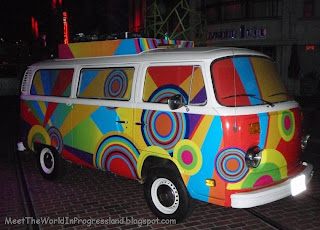 There are several pedestals just like this one lining the street. Perhaps these are for go-go dancers? It's Club DCA! 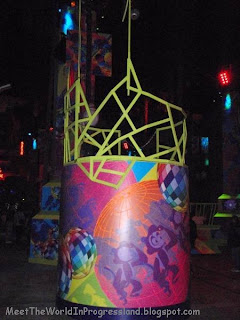 The giant screen below is actually the wall of the Hyperion Theater that has the "sky" backdrop painted on it. 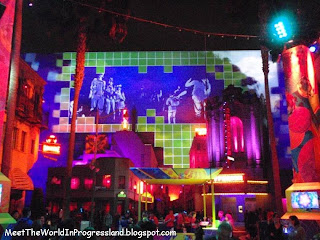 The people projected onto the wall were standing in a designated area just to my left. People did seem to be fascinated by seeing themselves up there. 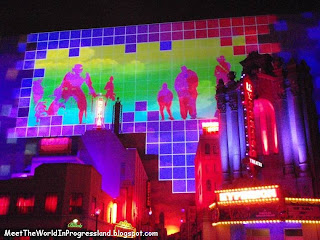 This shot was taken from a spot near the Hollywood Backlot Stage. 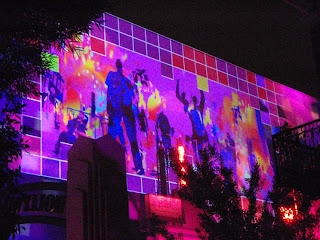 As long as we're in the area, let's go pay a visit to my old friend, the Sea Serpent from EPCOT's World of Motion. 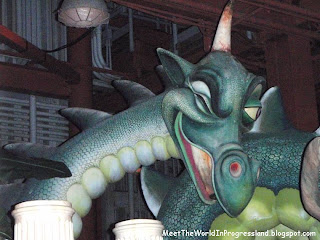 Oh, and the Silly Symphony swings are now open. They are SO MUCH more fun to ride now that.....hmmmm, actually, they're still just swings. 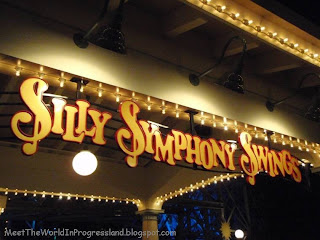 I remember riding these at Knott's Berry Farm when they added them to Fiesta Village in 1987! 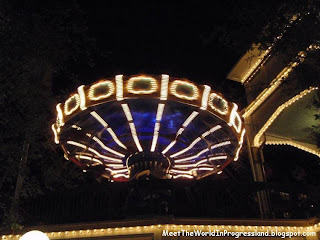 The Knott's version has a figure of a Senorita on top! 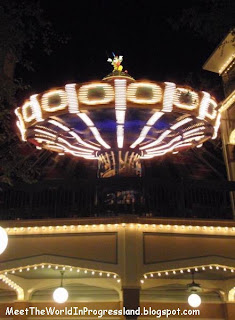 Okay, sorry for the lame post and the blurry photos today!
***POST UPDATE: To see Knott's Berry Farm's version of a "Glowfest", click here: Snoopy's Starlight Spectacular.
Posted by TokyoMagic! at 1:10 AM

Looks like fun! It's too bad you did not get to review "World of Color" for us---I saw that on YouTube yesterday, and it looks great (I love the "Under the Sea" and "Friend Like Me" segments---I'm sure it looks much better in person, too).

So did you LIKE "Glow Fest"? You don't sound very enthusiastic - more like, "Here's this, and then this, and now here's something else". Never a "This was really cool!".

I hate to be negative, but it looks pretty awful. I wish they would spend less time and money on parades and shows and more on kick-ass attractions.

Major, I agree with you completely. Just give us more attractions and yes, make them "kick-ass!" The park is going to be 10 years old in less than a year and if you ask me, they are doing too little, too late! They are spending 1.1 billion to try and turn it around, but shouldn't they have been trying to do that years ago? And why with that amount of money, are they only adding two "E" ticket attractions? The Red Car/Trolley attraction will probably add to the atmosphere and themeing, but I really don't understand this addition to the park when DL and Tokyo DL have both shut down their Jolly Trolley attractions. I wish they would take the money they are using for that and give us a "real" attraction instead.

Don't worry about being negative....I'm right there with you. I tried to just imply my negative feelings with sarcasm, but I know that can be hard to detect sometimes when reading it in print. Just so you know, I really did like World of Color and it's use of the original Wonderful World of Color theme song, but like Fantasmic, it is not something that I will need to see over and over. I did think that Glow Fest was a big waste of time and money and that's also how I feel about the reworking/rethemeing of the Ferris Wheel, Swings, and Mulholland Madness. No matter what you do to those attractions they will still be "off the shelf" carny rides that I don't expect to see when I go to a Disney park. If I want that, I can go to Knott's Berry Farm, Six Flags Magic Mountain, the Los Angeles County Fair or a local chuch carnival.

As for the name and the theme, I really do think it was time for a change. What do Monsters Inc., Bugs Life, Little Mermaid and talking Cars have to do with California anyway? Doesn't just the name of the park make most people think of "failure." If you noticed, I never used the name of the park in my post. If some people think that is being extreme or dramatic, well I took my lead from Disney themselves. In their last advertising campaign (the one with the talking Jungle Cruise animals), they never even mention the name of the park once! They refer to it only as "the second park." That tells you something right there....not to mention the fact that for years now, they have had to literally give tickets away in their 2-Fer promotion to get people into that park.

In the past two years that I have been blogging, this was only my third post on DCA. The previous two posts were on the only two things that I have ever really been able to get excited about in that park....the "Frank Lloyd Wright" bathrooms and the World of Motion props from Epcot that are stuck behind a wall in the Hollywood section!

There, I got that out and I feel better now!

Thanks for your reply, Chris! The reason that I hate to be negative is that there are a few blogs (not this one!) out there that can get tiresome to read because they are 99 percent complaints. It's not even that I disagree, but who wants to hang out with somebody who complains all the time? MEANWHILE... DCA really is in a disappointment.

When I see what Universal did with "The Wizarding World of Harry Potter", they outdid Disney in a huge way. It kills me that Disney is playing "catch up", or maybe they aren't even doing that.

There are elements of "Carsland" that look like they have really gone the extra mile, I am actually looking forward to some of that stuff quite a bit. But I agree with you, the re-jiggered swings and putting Mickey's face on the Ferris Wheel are frustrating. "This ride wasn't entirely successful, so we've repainted it! Aren't you excited?!". Ummm, OK. The themeing IS a problem, but it's not the *whole* problem.

You make a good point about the Trolley attraction. Will it just go up and down the street? When you have a beautiful Main Street, that might work, but what will you see at DCA? In two years are they going to be gathering dust in a warehouse?

1.1 billion dollars; I appreciate that they want to improve things, but when I see the massive construction and time spent on that darn World of Color show (and tens of millions of dollars) - for fountains, lights, & projections - it baffles me. Somebody has convinced the top executives that this is what people want, and IT'S NOT. The only people who go to Disneyland for "Fantasmic!" are the AP's who would be going anyway.

If they managed to add 3 or 4 "must see" attractions - something along the lines of "Tower of Terror", full of detail and atmosphere - it would make a big difference.

I still believe that the Imagineers are able to come up with innovative, imaginative ideas, but they have not been allowed to really do their thing, which must make them nuts.

Oh well... I feel kind of like I'm reviewing a movie that I haven't seen. Maybe DCA will be wonderful when it's all done. Let's cross our fingers!!

Yes, Universal did outdo Disney with the "Wizarding World of Harry Potter" and in my opinion they have been outdoing them for a while now. I would much rather go on their Spiderman attraction than the Indiana Jones attraction at DL. I also think their Men In Black Alien Attack is a better attraction than Buzz Light Year's Astro Blasters. And their E.T. and Cat In The Hat rides are on the same level as anything you would see Disney do. Disney better start playing "catch up!"

Well I hear you and Major about the negativity, but dang this Glow thing looks lame as can be.... Maybe Go-Go dancers would improve it?

The Swings to appear to be a huge improvement of the giant orange, but yeah, Knott's did this over two decades ago!

Thanks for bringing us the details of Glow Fest - Now I don't need to see it myself!