After looking at one of the the Disneyland Hotel slides from my last post, I was reminded of something. Back in the early nineties, when WESTCOT Center was being planned as the "second gate" for Anaheim, there was a preview center located on the third floor of the Plaza Shops building at the Disneyland Hotel. Below is a close-up of that slide and I've circled in red where the doorway was to the preview center or as it was officially called, The Presentation Center. 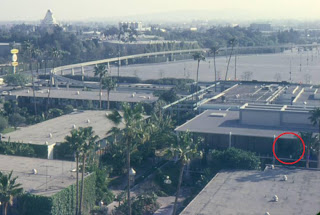 The only thing I can really remember being on display in that room was a very simple model showing just the layout of the proposed resort including the hotels, parking structures, Downtown Disney and Westcot. I really don't remember there being any concept art or much of anything else, but I can't say for sure. I do remember that they had copies of a newsletter called, "The Disneyland Neighborhood News" (and of course I took one of those.) The whole idea behind the center and the newsletter was to inform the locals of what was being proposed and to try and win their support since there were still some groups of locals that were opposed to any expansion in Anaheim.

Here's a copy of that newsletter: 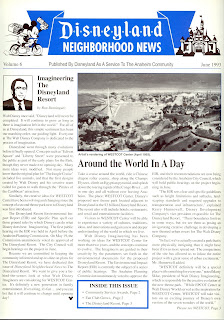 The page above mentions that the "creative ideas for WESTCOT have been evolving and changing......" Too bad they evolved all the way into becoming California Adventure. 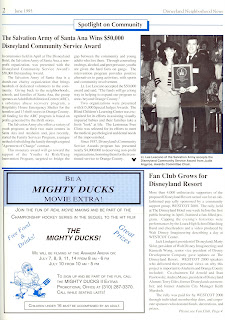 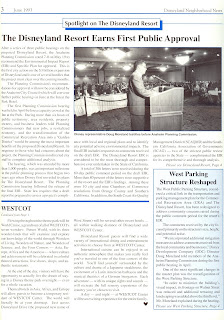 Originally, there were supposed to be two parking structures, one on each side of the resort. There were also going to be ramps that would provide "convenient access from the Santa Ana Freeway (I-5), allowing employees and guests to travel to and from the structures without impacting surface streets." Well those plans fell by the wayside! That bridge over Ball Road doesn't count as a direct ramp because it's only open in one direction at a time. There have been numerous times when I was arriving or leaving the area when the ramp was closed for the direction I was going. Have you ever sat at the intersection of Disneyland Drive (West St.) and Ball Road in backed up traffic and been waiting for the light to change? Me too, many times. That wasn't part of the original plan! 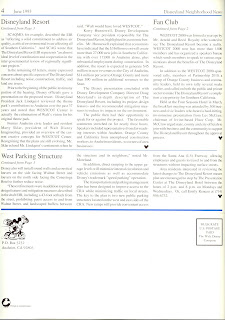 "Walt would have loved WESTCOT." Hmmmm, I wonder how he would have felt about California Adventure?

This postcard was also available at the center. 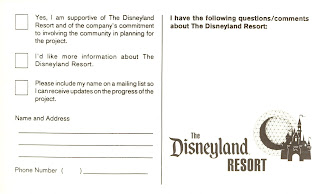 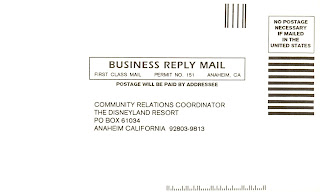 I kind of like the logo that was being used at that time. Ah, what might have been.....
Posted by TokyoMagic! at 11:21 PM

The fact that photo shows the old parking nearly makes me cry. Yes, it's too bad that the WESCOT project fell through. It would have been nice to have had a West Coast version of Spaceship Earth here.

At the end of the day, won't they have spent as much money on DCA in its many stages (initial creation, expansion) than they would have on what was deemed to be the too-expensive Westcot?

Terrance, I know what you mean...I look at that old parking lot and think gee, can't they just start over? It was a blank canvas just waiting for something wonderful and look what they did to it!

Jason G., I think you're correct if you include the original cost, the few things that they have added to it over the years, and the current expansion planned for it now. And who knows if it will ever be more than just a half-day park? I guess we'll have to wait and see. But WESTCOT sounded like it was going to be pretty incredible. I remember being very excited after hearing all the details about it. When I heard the announcement for DCA and what it would be about, there was ZERO excitement on my part.