Today we have a vintage slide from 1973 showing the Disneyland Hotel Shops and Travelport. Just out of view to the right would be the Disneyland Hotel Monorail Station. I have always loved the "Erector Set" style girders and the mid-century modern architecture of the old hotel and truly miss it today. If they had just kept the existing buildings and built Downtown Disney in between them and the park, wouldn't it have still worked? Couldn't there have been a "retro coolness" in keeping the original architecture? Okay, maybe not to some people....and obviously not to the people in charge of "tearing things down." 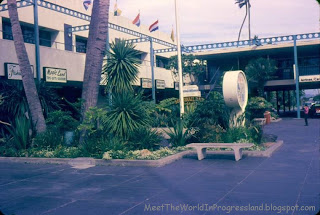 For those that like change, this is the view that can be seen today while standing in the same spot. Again, the monorail station is just out of view on the right. That building that replaced the Hotel Shops is The Rainforest Cafe in Downtown Disney. 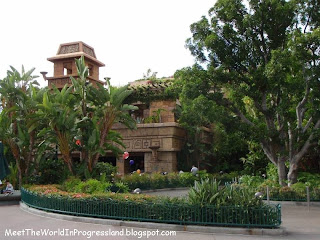 Here is another slide of the hotel grounds from 1973. I am assuming this was taken from the northeast side of the Dreams Tower, formerly the Sierra Tower, and soon to be the Adventure Tower. OR, it could possibly have been taken from the east end of the Magic Tower, formerly the Marina Tower, and soon to be the Fantasy Tower. Gee, you need a scorecard just to keep track of these names! And just so the south tower isn't left out....it is currently the Wonder Tower, formerly the Bonita Tower, and soon to be the Frontier Tower. Whew! Some of the original two level hotel suites can be seen in the foreground of this photo, along with the three-level Plaza Shops Building on the right. All of this has since been torn down to make way for Downtown Disney. But hey, that's Progress! There's a great big beautiful tomorrow...... 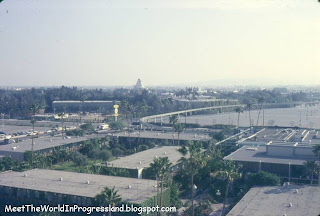 Wow, this certainly has changed!

I remember a shop at Disneyland or the Disneyland Hotel selling Figment merchandise, but I cannot remember where it was (or maybe I imagined it!).