We are now inside the lobby of Tokyo Disneyland's Mickey Mouse Revue. The walls, carpet, drapery and furniture are all done in shades of pink. 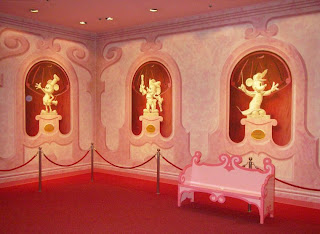 All along the wall are paintings of Mickey Mouse in various roles from his films. Each one gives the illusion of being a marble statue sitting in a niche, but they are actually all painted onto the flat wall. 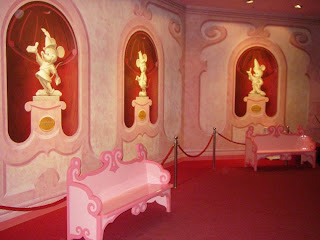 Each "statue" has a plaque that lists the Mickey Mouse cartoon that it is from, and the year it was released. 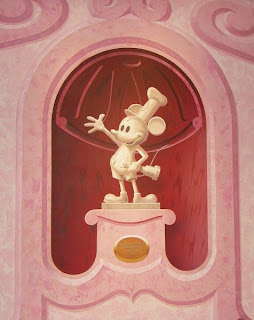 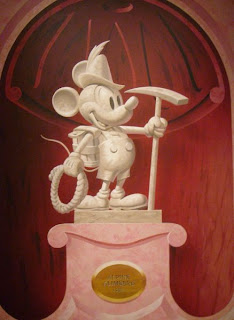 The painting below is the largest and features both Mickey and Minnie from the film, "The Nifty Nineties." There are Fantasia-esque cherubs pulling back drapery at the outer edges of the painting. Again, this has all been painted on a flat wall.
.
. 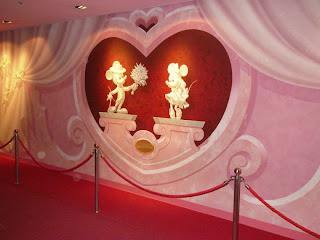 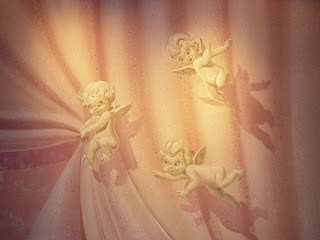 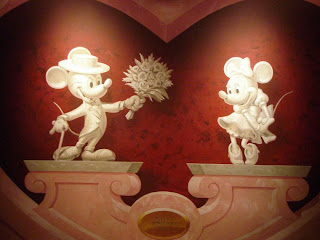 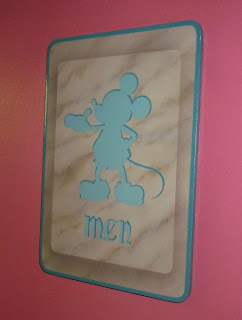 When it's showtime, an announcement is made and a curtain rises allowing access to the pre-show theater. This area is terraced with lean rails (like the Mission Control pre-show area was in Flight to the Moon and Mission to Mars.) 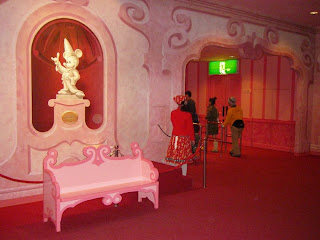 The pre-show film is the same one that played for the WDW version, with only a couple exceptions. When the attraction was brought to Tokyo in 1983, the narration was rerecorded in Japanese. Also, the last scene in the film was updated with a "then current" scene of the Disney characters dancing with children in front of Sleeping Beauty Castle at Disneyland in Anaheim.

While this updated scene has sort of an 80's feel to it (mainly because of the clothes worn by the kids), the rest of the film....including the music soundtrack, has a very 70's vibe to it.

There are even a couple spots in the film that include the original 1970's WDW logo of a block letter "D" with a Mickey head inside of it.

When the film is over, automatic doors open so that everyone can enter the main theater. 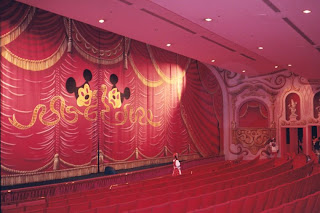 (Taken with flash)
There are more Mickey statues painted above the entry and exit doors, and painted on the curtain are two Mickey faces depicting "comedy" and "tragedy." Note the balcony in the photo above...there is one of these on either side of the theater. These are used during part of the show. 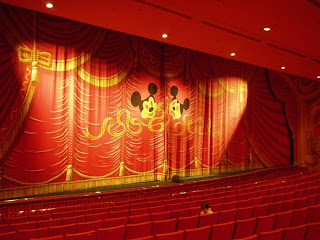 (Taken without flash)
We are now ready for the show to begin....but please check back for Part 3. Thank you!
Posted by TokyoMagic! at 12:01 AM

This is an exciting series, thanks so much! Is this how the lobby used to look at WDW? I can see how it would fit, but I really can't remember exactly how that area looks now, last year when I was there it was crammed with 1,600 "guests", I don't think I could even see my feet. And after all that, the show (Philatragic) was really bad on a "Honey I shrunk the audience" scale...

Thank you, VDT! I have never seen photos of WDW's lobby, so I'm not sure if it was decorated the same or not. Maybe someone that saw the MM Revue when it was at WDW can let us know. I'm guessing that the building plans were just duplicated for Tokyo. And it has been a couple years since I went into Mickey's Philarmagic, but I think they might have divided their original waiting area with walls an then added the queue rails. Again, maybe someone that knows for sure can tell us.

Boy, this is just great stuff.

This is one attraction that needs better documentation. Please keep up the nice work.

Thanks for posting those pictures. They are great and it is a (sad) pleasure to see what is lost now forever..
I wanted to correct you on one thing: The "D" logo you took a picture of is not the original Walt Disney World logo from the 70's (although it looks a bit like it) but the original Tokyo Disneyland logo that was used until Tokyo Disneyland became a "resort".

wow! thanks for another great blog post!
Customized application development