I have always loved "then and now" photographs....two photos that show a building, a street corner, etc., taken many years apart, but shot from the exact same camera angle. There are books dedicated to such photographic comparisons. One of my favorites is "Los Angeles, Then And Now" by Rosemary Lord. For this post, I thought I would take the "then and now" idea one step further by adding a "here and there" aspect to it. The photos below were taken many years apart and from the same angle, but at two different locations.....on two different continents. 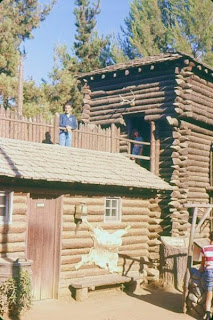 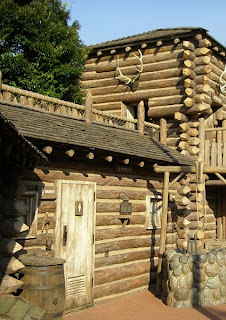 There: Tokyo Disneyland, Japan
Now: (2007)
.
My dad took the first photo of my uncle at Disneyland over 40 years ago. I took the second photo at Tokyo Disneyland just a little over a year ago. Both were taken inside the fort on Tom Sawyer Island (Fort Wilderness at DL and Fort Sam Clemens at TDL.) I thought it was interesting to see the similarities between the two locations, as well as the differences. Both have the same door (leading to the women's bathroom), and it's flanked by the same windows, barrel, and wall mounted lantern. The water well in Tokyo however, is a bit closer to the fort. And while both use dead animal horns for decoration, it appears that Tokyo might draw the line when it comes to dead animal skins as art. Note also that Tokyo has put woven rope between the railings on their second level. This helps keep the little ones from climbing over the railings and rolling off the roof and into the well.
.
I hope everyone enjoyed this "Here & There, Then & Now" comparison. I will try to come up with some more of these. To see more photos of the fort at Tokyo Disneyland, Click Here.
.
Posted by TokyoMagic! at 10:20 PM