Popcorn is just as popular in Japan as it is here in the United States. The Tokyo Disney Resort however, has only a few popcorn stands that sell just plain popcorn. Most of the popcorn sold in their parks is flavored popcorn. Here is a partial list (from memory) of just some of the flavors: Cappuccino, Chocolate, Curry, Honey, Black Pepper, Strawberry, Sea Salt, and Soda (don't ask...I don't know what the Soda flavored one tastes like!) The next time I am there, I will have to make a complete list of the flavors, but this post isn't about the flavors, it's actually about the locations that sell the popcorn.

First up, is the Popping Pod, which kind of looks like it just "landed" in Tomorrowland. 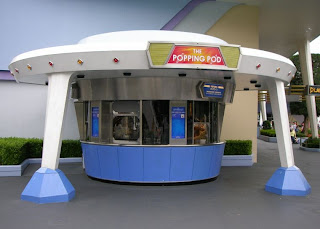 Also in Tomorrowland is this moon rover-looking cart. I do wish the Disney Parks worldwide would stop sticking brown, beige, and copper colors in their Tomorrowlands. Am I the only one that feels that way? I actually don't hate these colors, I just don't like them in Tomorrowland! 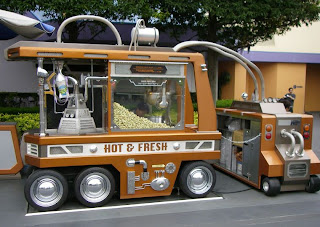 This next cart is from Adventureland and has a Tiki bird (complete with chef's hat and scarf), turning the little crank mechanism. 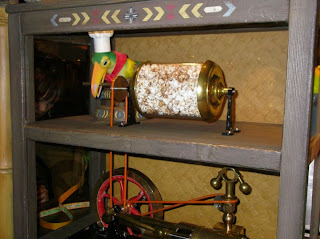 These last two pics are both from Westernland. First we have Big Al turning the crank at one cart..... 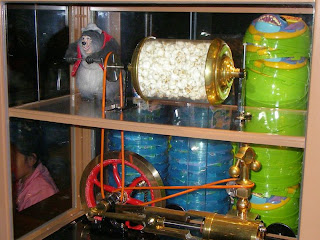 ....while at another cart, we have the politically incorrect version of Pecos Bill turning the crank with his foot, while smoking a cigarette! (Incidentally, upon it's video release, Disney digitally removed Pecos Bill's cigarette from all scenes in the film Melody Time.) 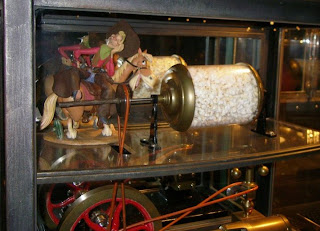 For Halloween, Tokyo Disneyland puts miniature costumes on Big Al, Pecos Bill and even his horse! I will include those pics in a future post.

*Post Update: I visited Tokyo just about a month after this post and the popcorn flavors that I had listed from memory was a complete list!

*Second Post Update: For the newer post showing the miniature figures wearing their Halloween costumes, click here: Halloween, Popcorn And Westernland.
Posted by TokyoMagic! at 1:12 AM

Fun post, I love the "Popping Pod"! Disneyland has the little characters in their popcorn wagons and I did notice they changed for the holiday's. Soda flavored Popcorn, is it carbonated?