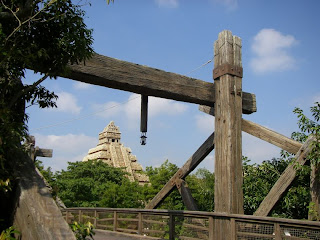 This is Tokyo DisneySea's Lost River Delta. Like the Arabian Coast area, it sits on the other side of the DisneySea waterway, so it is accessed by crossing over one of several bridges. The Indiana Jones Adventure: Temple of the Crystal Skull, is housed in an ancient Mayan Temple (as an interesting side note....the attraction was given that title in 2001, seven years before the last Indy movie was released). The Indiana Jones attraction in Tokyo DisneySea is similar to the Anaheim version (same track layout), but Tokyo's has a Mayan theme inside and out. Also, Tokyo's has a much larger exterior, a better queue, better effects, some better scenes (they've replaced the fake looking "projected rats on a projected beam" scene with something much better), AND they take your picture at the end of the attraction as the vehicle dips down under the giant rolling boulder. 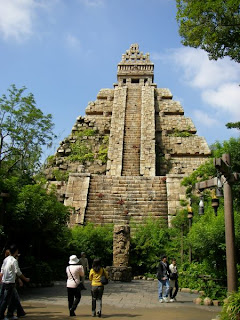 Next door to Indy is Raging Spirits, a roller coaster ride through an archaeological excavation site. This attraction has a 360 degree vertical loop and uses some fire effects which are pretty impressive when riding at night. 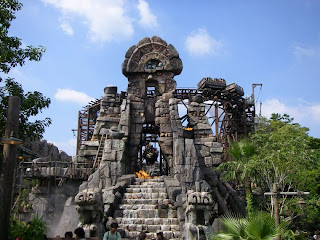 Notice in the photo above and below how the steps are on fire even with water running over them. 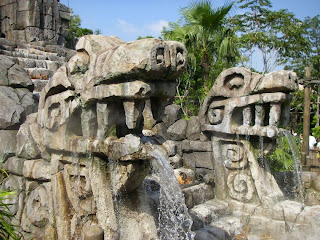 Thanks for the pictures. Countdown to Extinction at Animal Kingdom also uses the same track layout as Indiana Jones! It's not obvious due to the rearrangement of interior walls, but next time you ride try to look for the similarities.

Hi Westcot...I tried doing that when I rode the attraction at Animal Kingdom. It started out easy, but because of the darness, I lost track of where I was in comparison to the Indy ride. Animal Kingdom also takes your pic at the end of the ride, don't they? I'm surprised DL in Anaheim doesn't do that. I'm sure it would bring in a lot of money for them....and it seems that's what they are all about now. There must be some technical reason why they don't.

My recollection is that the design of the ride sort of prevented it somehow. I don't know what's different about Countdown that allows it. When Indy opened the Merchandise department tried to get the photo location in there, but it wouldn't work.

Park management sometimes loses sight of diminishing returns. I'm sure the revenue per rider goes down with each new location. I would be curious to know what impact the photo locations have on per capita spending.

WDW was testing including on-ride photos with Photopass last year. Heopfully that system comes to DL. Did you know that the DL and WDW Photopass System is shared? When you get back from WDW you can go to DL and save $50 by buying it here! Any pictures taken at DL will also be included (pictures are deleted after 30 days).

I've never bought an on-ride photo, but there is definitely a demand. The daily gross revenue for the Splash Mountain photo was about $50,000 when it opened!

Westcot...I have never bought on-ride photos in the U.S. parks....I have only bought them in Tokyo. It just seemed like they didn't price gouge there. I can't remember now exactly how much they were, but I remember thinking they seemed fairly resonable.