We will be taking a little break from Tokyo DisneySea for now, but we will definitely go back and take a closer look since there is still much more to see there. For now, let's go back to Tokyo Disneyland and take a look at how they decorate the park for Halloween. To begin with, I don't remember Disneyland in Anaheim doing too much for Halloween until around the early to mid nineties. Then it seems like they stopped at some point, and didn't do much for Halloween again until just two years ago....but somebody please correct me if I'm wrong about that. I do have photos of DL's Halloween decor in the nineties. I should pull those out and post them.....if I can ever pry myself away from the Tokyo parks. I have to say I was totally blown away by how much decorating Tokyo Disneyland does for Halloween. It seems like more than half the park gets decorated. They decorate the Plaza area, Fantasyland, Westernland, Toontown and World Bazaar (Main St.). The pictures in today's post were all taken in the Plaza in 2005 . If you look closely, you will recognize some of these figures from Anaheim. That's because they acquired them from Tokyo and used them the very next year in 2006......and then again last year in 2007.....and also again this year. Tokyo changes their Plaza vignettes and all of their character figures every year. They only reuse a few of the pumpkin props. In the photo above, the Mickey, Minnie and Donald figures are the same as those seen alongside the tram route in Anaheim. Too bad Anaheim didn't also get the pumpkin carriage. 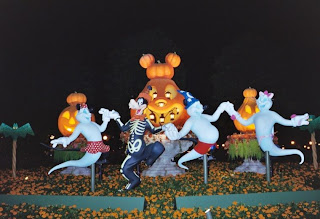 Anaheim also acquired the Mickey and Minnie ghosts and the Goofy figure seen above and they are also visible along the Disneyland tram route. I am guessing Anaheim didn't want the Marie (Aristocats) ghost figure. (By the way, Marie is a VERY popular character in Tokyo and is depicted on a fairly large selection of Tokyo Disneyland merchandise.) 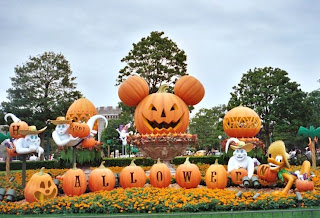 These ghost figures, Pluto and the pumpkins that spell out "Halloween" were also brought to Anaheim to use the following year.....and the next.....and the next....and we will probably be seeing them again next year, but hey....it's better than nothing, right? I'm guessing that the reason Tokyo changes their figures every year (other than the fact it appears they are not afraid to spend money), is that the figures' costumes reflect what the actual park characters are wearing in the Halloween parade each year. Yes, Tokyo Disneyland has a Halloween parade and THAT changes every year as well....they don't just trot out the same floats year after year. They go to all this effort, for park decorations and a parade that are only in use for about 7 weeks. Oh, and they write an entirely different soundtrack for their Halloween parade every year, done in the classic Disney parade style. 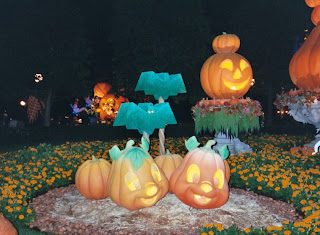 As the month goes on, I will post some photos from Tokyo Disneyland's Halloween parades as well as photos of decorations from other areas of the park. 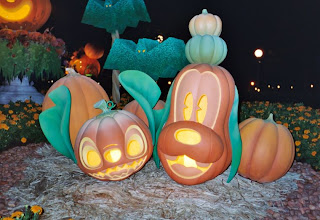