Hey kids, it's time for another Vintage Disneyland Trip Report! Thirty three years ago today, my eighth grade class went to Disneyland for "Grad Party '78". This was different than the "Grad Nite" events. This event took place all day long up until park closing. Here is my ticket from that day.

I saved a copy of the parental consent form that was typed up and handed out to all eighth graders. That's right, typed as in on a typewriter and then Xeroxed.....or would it have been mimeographed? Well anyway, I'm pretty sure it wasn't copied on a ditto machine! 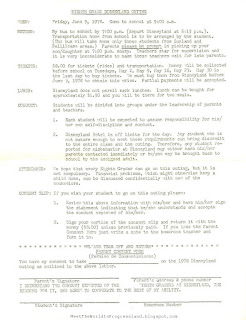 I also saved my school receipt for the ticket. This really was an important trip for most eighth graders. It was something that many of us looked forward to all year because we would get to spend the day in the park without direct supervision. There were adults that accompanied us on the bus trip, but once inside the park, we never saw them again until it was time to go home. 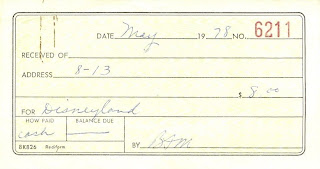 I took my Kodak 126 Instamatic Camera on this trip and out of a roll of 12 exposures, I only took 6 pictures that day...I'm not sure why I didn't shoot the entire roll at the park. The rest of the shots on the roll were taken during my eighth grade graduation ceremony. Sorry, but those shots WON'T be seen here!

I mentioned in an earlier post that after Space Mountain opened, it was always the first attraction we headed for. In the shot below, it would have been only one year old and already part of the glow-in-the-dark decals on car number 5 had been peeled off! It was probably done by some eighth grader that was "not mature enough to meet the trip's conduct requirements" and "brought discredit to their entire class"! The flash cube really wasn't powerful enough to reach as far as I was hoping it would. I'm posting the original pic and a scan of the negative. It's weird how the cast member outfits came out looking red in the new scan when they were actually a horrible orange color. 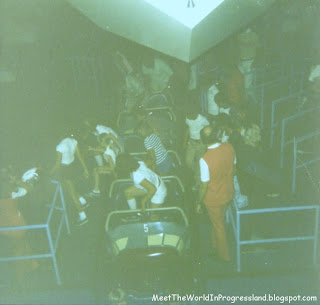 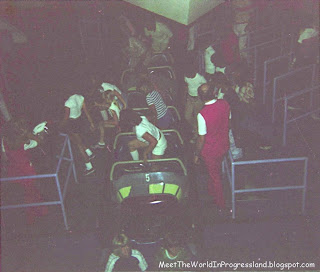 We've met some of my childhood friends in my past Vintage Disneyland Trip Reports. Today we'll be meeting....well, let's just call her Carrie B. We had known each other since Kindergarten, but we had become even closer friends in Junior High. We had planned to go on this trip together since the beginning of the eighth grade school year. I actually located her about 10 years ago through Classmates and we exchanged emails for a while. Since she doesn't appear to be on Facebook, maybe I should go through my old email addresses and ask her permission to post her picture here. For now we'll just have to settle for Jane of "Dick and Jane" fame (that's actually BEFORE my time....I tried to find a decent picture of Janet from the "Janet and Mark" books, but didn't have any luck.) 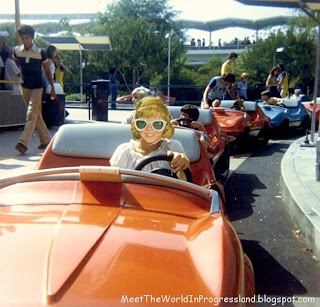 I don't remember what it was that she bought that day, but it must have been a lot since she purchased the heavy duty Disneyland shopping bag with handles. I have one of those bags and I will eventually get around to posting it. 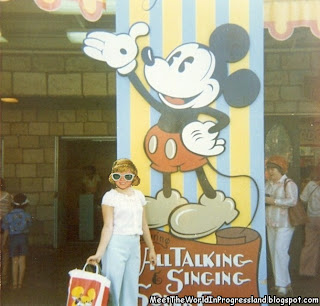 This next photo is probably a good place to tell my "New Matterhorn" story. Once again, the year was 1978, so most DL fans probably know that this was the year the "New Matterhorn" was unveiled. At this time, the 29 year-old attraction became more "enclosed" and special effects were added such as "glistening crystal ice caverns" and "howling winter storms". The bobsleds were also redesigned and were now tandem instead of single. And of course the Abominable Snowman himself began making an appearance within the attraction.

I had already been to the park twice since the beginning of the year and had seen the construction taking place on the mountain. I had saved the special color Disneyland advertisement from the newspaper and I had seen the "New Matterhorn" commercial playing repeatedly on TV. The new attraction was even featured on the front of the Grad Party ticket. It had opened almost 2 whole weeks earlier (May 27th) and I was soooooo ready to ride it. Then a friend's father who worked at the park told me just days before the class trip, that the Matterhorn had shut down because they were having technical trouble with it and they didn't know when it would be up and running again. AW NUTS!

Okay, so at least we knew before our trip that it was going to be closed, but then at some point during the day while riding on the PeopleMover, we noticed one of the brand new bobsled trains traveling down and around the mountain with people in it and we got very excited. We got off of the PeopleMover and immediately ran over to the Matterhorn, only to have a cast member tell us that they were just testing the ride and that it would not be opening to the public that day. Yep, at second glance we noticed that everyone riding in the bobsleds was wearing "office attire" and Disneyland name badges. DOUBLE NUTS!

Well, time goes by very slowly when your that age, so it seemed like forever before I was finally able to experience the new attraction, but the reality was that I got to see it within a month or two when my friend's father got us into the park. That will have to be a story for another post....but that friend's father worked on the construction of Big Thunder, so I have construction shots and backstage shots that I will be posting in the future!

This photo was taken while riding the PeopleMover and shows the "test subject" cast members going for a ride on the New Matterhorn. 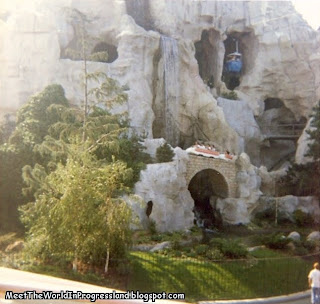 One last New Matterhorn detail.....while riding the Skyway, we happened to notice that the Abominable Snowman was visible while passing through the Matterhorn. We passed by him too quickly though and I just had to get a picture, so we went on the Skyway again. Actually, we went on it two more times and I have a second photo almost identical to this one. Alas, my attempts to capture him on film were all in vain since I didn't know that the flash cube wouldn't reach that far. Of course I didn't realize it until I got the prints back from Photomat. TRIPLE NUTS! 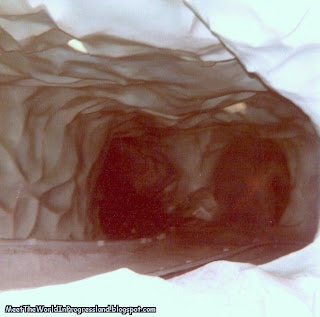 Oh, and speaking of Big Thunder construction, this sign was hanging on the construction wall over in Frontierland so I had to take a picture of it. There was a more colorful version of this artwork that later replaced this earlier version. Note the geysers which did not end up in the attraction at Disneyland. 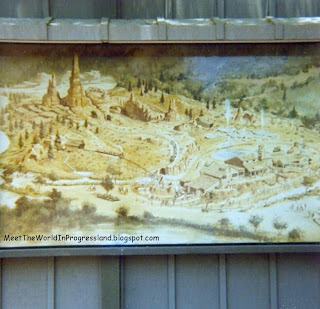 Other memories that I have from that day are, calling home from the "Chatterbox" speaker phones in the Bell exhibit in Tomorrowland and purchasing this souvenir book at The Character Shop across the way (now The Star Trader). 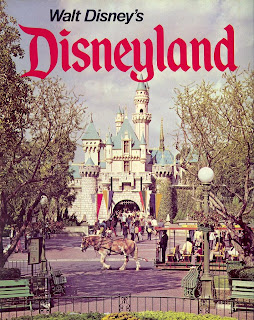 Here are a few scans from the inside of this 74 page hardcover book. 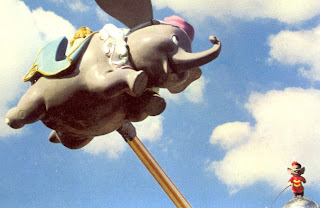 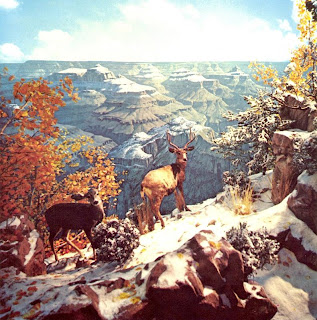 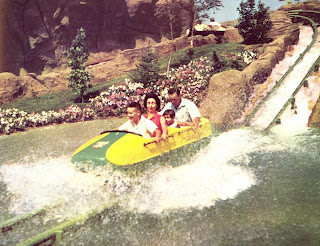 At the time this book was purchased, these Matterhorn pictures were already outdated. The piece of Matterhorn track seen below, was an outdoor portion that became enclosed after the remodel. 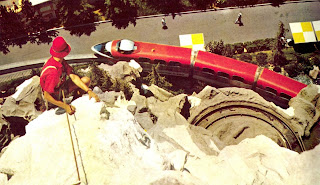 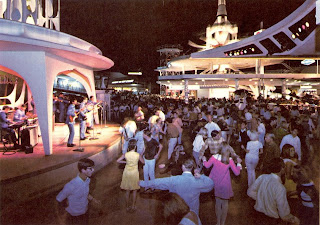 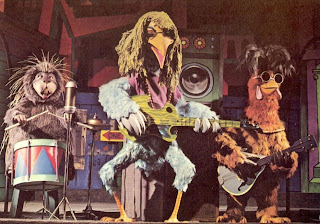 If you have read this far, I hope you enjoyed the trip down memory lane....and thanks for going with me!
Posted by TokyoMagic! at 2:01 AM

This brought back so many memories for me! I have to go back and look at everything again!

What a wonderful story and memories. Good times and thanks for sharing with us. Very special.

Great stuff! I can't help but think "those were the days". $8!! Wow. And I see you paid with cash, Mr. Big Shot (ha ha). Love the pictures of your friend with the pasted on head because now they are odd! Is that the Mustangs playing in Tomorrowland (in that book photo)? Wish they had included the geysers for Big Thunder, but oh well.

Connie, I'm so glad you enjoyed it. I can understand throwing stuff out. I went through a period of doing that and now I regret it. Fortunately, I kept EVERYTHING related to Disneyland. But I did get rid of some Knott's, Universal and Magic Mt. stuff.....D'OH!

Thufer, thank you! I enjoyed recalling the memories. I feel like I better start documenting some of my early DL trips while I can still remember some of this stuff!

Major, I'm sure my Mom gave me the $8 for the trip. I never noticed, but I do see an "-angs" behind that band. I guess The Establishment had the night off and maybe Sunshine Balloon wasn't playing at the park yet. I also wish they had included the geysers for Big Thunder, but I guess if they had then we probably wouldn't have gotten to keep some of the Rainbow Ridge buildings. Actually, I wish they had just left Nature's Wonderland where it was and that way we could still have both!

Awesome post! And 9.50 for a full day of fun and food!?! Man.. those were the days!! You should see the crap field trips my kids go on that I pay 25 bucks for nowadays!

You even saved your parental consent form and the school ticket receipt from 33 years ago! Tokyo, you are the champion archivist.

Carrie B. has some mighty cool shades she's wearing.

Your Kodak Instamatic was smokin' that day. I can actually make out the outline of the Abominable. Beats not having any pics at all.

Thanks for the memories.

I wish I grew up in California, and got to go on school field trips to Disneyland. Great trip report and memorabilia, TokyoMagic! I love the Grad Party '78 Matterhorn ticket.

I know my imagination would have run wild after seeing the Big Thunder construction wall. I'm glad the attraction model is on display at the Disneyland Hotel (complete with its tiny goat figure).

And it's always good to see classic retro Mickey, on that sign and on the shopping bags!

Thank you, Darrin, Anon., SWS and Dan! Dan, I should have pointed out that that Mickey sign was in front of the old Fantasyland Theater (where the Pinocchio attraction is today). There was also a large retro Minnie on the other side of the theater entrance. I wouldn't be surprised if those were the old "flapping ears" Dumbo vehicles pictured in that book. Even though it was 1978 and the attractions pictured were only supposed to be current ones, you can spot little things that date the photos....like round Skyway buckets barely visible in one pic, and the point of the TWA Rocket sticking up above the trees in a Frontierland pic. I'll post more scans from the book in the future.

I went in Junior High 1980 and saved nothing so this is extra cool! WOW what a fun trip you had, thanks for putting this amazing post together, it feels like I actually did get go back - one balloon found!