Father's Day In The Parks

It's time for another Father's Day In The Parks post! Once again, the photos here were all taken by my dad at various tourist spots throughout Southern California.

First up, we have Disneyland in the Summer of 1967. Here we see my aunt standing in front of Captain Hook's Pirate Ship. 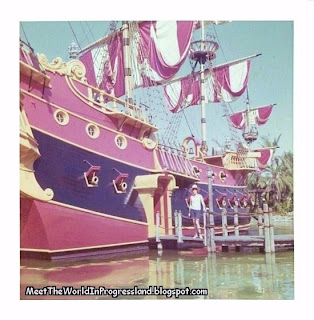 This next one was taken the same day in front of the Global Van Lines truck that used to be parked in Town Square. Next we have Knott's Berry Farm in the Summer of 1966. Here we see my uncle standing in front of the Calico Railroad, while some kid wearing mouse ears (hey kid, you're in the wrong park!) is trying to levitate the train with his special powers. We first saw my uncle inside Disneyland's Fort Wilderness in my Then and Now/Here and There post. 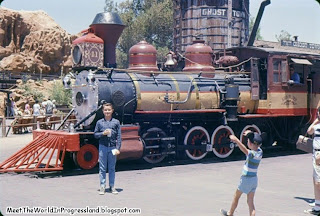 Below, is a shot of the "Ghost Town Express" wagon. Doc Walker's cabin from the Ozarks can be seen in the upper left. This is before it was moved near the Church of Reflections (it has since been demolished). 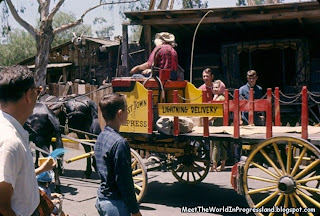 Now we are back in 1967 and with my aunt at Marineland of the Pacific. The structure behind her was the park's Oceanarium which consisted of two huge steel salt-water tanks. 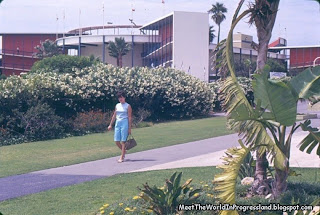 This is Bubbles the pilot whale, performing in the Oceanarium. She was Marineland's most famous whale until Orky and Corky came along. Bubbles is actually still alive and residing at Sea World in San Diego. The owners of Sea World purchased Marineland back in 1987 because they needed a pair of breeding killer whales (Orky and Corky). They bought the park with the ruse that they would keep it open, but after the sale went through, they quickly shut it down and moved all the animals to Sea World. Note the two-level Sky Tower observation car in the background. 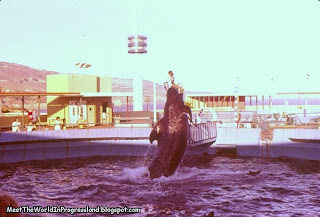 Last up for today, we have two photos taken at Universal Studios in the Summer of 1967. This first shot is of a western set on the backlot. The train station sign reads "Medicine Bow, WYO." Medicine Bow was the location of the television show, The Virginian, which was a Universal production and ran from 1962-1971. Train tracks can be seen alongside the depot, but they seem to disappear into the dirt as they come towards us. 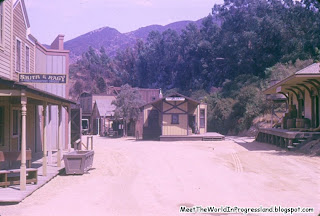 This last photo shows some movie miniatures that were once on display in the "upper lot" portion of the studio. A rain special effect (translation - "sprinklers") can be seen on the roof of the structure on the right. 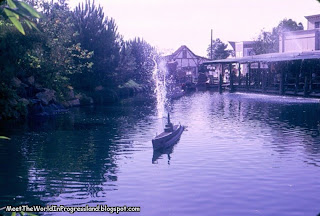 Just for kicks, I've included two scans from a 1977 Universal Studios souvenir book. Compare these with the two Universal shots above. The caption for this first photo reads, "New York right next to the Old West! Turn a corner in Hollywood's biggest backlot and suddenly you're in a different world." The Smith and Aagy Photographic Studio sign is still on the roof of the building on the left, but the train station sign appears to be missing. 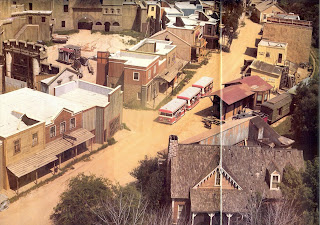 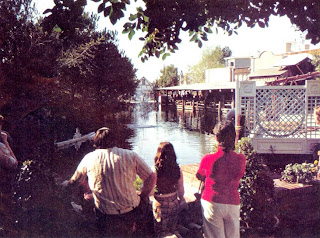 I'd like to wish my dad a very happy Father's Day and thank him for taking me to all of these cool places many times throughout my childhood. I love you, Dad!

And a Happy Father's Day to ALL dads out there!
Posted by TokyoMagic! at 6:01 PM

That was fun!!! And I loved the kid with the mouse ears, LOL!

Wow, what a great bunch of photos! I'm wondering if my dad ever took a picture of ANYTHING! He seems to be camera-phobic.

Bubbles is still alive?? Wow, I am astounded. Had no idea pilot whales lived so long.

What a fun post, thanks for sharing your dads pictures. My dad and Major's dad shared the same phobia, while my dad is in a few pictures, he rarely took any.

I think the Pirate Ship and Skull Rock are two of the coolest things at Disneyland that I never got to see. I can almost taste the Chicken of the Sea Tuna Sandwich. It's too bad they are no longer in Fantasyland, and never made it to Walt Disney World.