Last week, I got a late night "itch" to go over to the Parks. My goal was to get there before DCA closed at 10:00 so that I could go on the Little Mermaid attraction again. Well, the traffic on the 5 freeway was not pretty! It got even worse as I got closer to the Parks because the fireworks were going off and everyone on the freeway was slowing down to watch them. SMART!

When I finally arrived at the parking structure, I was surprised to see that there weren't any cast members in the toll booths. I guess even Disney isn't going to charge people 15 dollars to park for just a few hours. I wonder what time they stop charging? Anyway, I was directed over to the Pinocchio lot which is located just south of the Mickey and Friends parking structure. I think I have only parked there once before and since I have taken pics of the signs on all the different levels of the Mickey and Friends structure, I thought I should take a picture of ol' Pinoke. 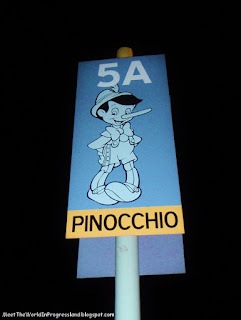 When you park in the Pinocchio section, you have to cross the tram right of way in order to board the trams. The caution sign below is posted at the edge of the Pinocchio lot. Speaking of trams, since the fireworks had ended by now and people were leaving the park in droves, many of the trams were dropping people off and then just heading straight back to get more people instead of picking up the few people that wanted to go TO the park. It makes sense, I guess. They just kept driving by us and a voice over the speakers would say, "there will be another tram along shortly...." So after finally boarding a tram, I realized that DCA was going to close before I could get to the gate. NUTS! 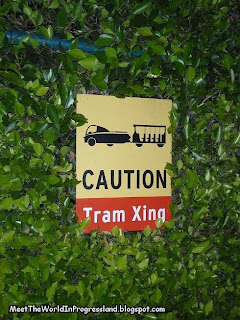 So I went into Disneyland and thought maybe I could go on the new Star Tours again. Well, it had a wait of 120 minutes, so I figured I would try again at the end of the night. While walking through New Orleans Square, I happened upon this casket-shaped "quarter press" machine. How long has this been here? I'm guessing not too long. I love the themeing! 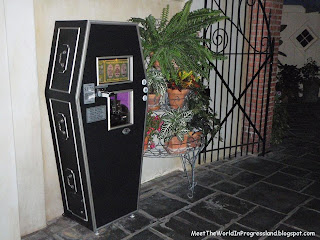 Did that wall behind the machine used to be a doorway? 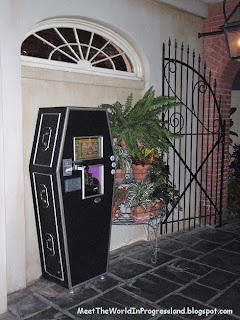 I kind of like the Haunted Mansion designs, but why do they have to stamp "Disneyland Resort" on them? Can't they just say "Disneyland"? Am I being too nitpicky? 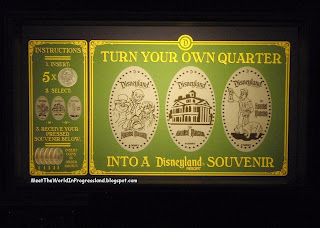 Well the night goes by quickly when the park closes at 12:00 and you don't get there until 10:00, so at five minutes before park closing, I went back over to Star Tours and the wait was now posted at 60 minutes. I saw where the end of the line was and compared it to when I last rode it and figured it would probably be shorter. It ended up being only about a 30 minute wait. Upon exiting the attraction, I noticed a sign that I had not seen during my last visit. Maybe it wasn't there yet? Anyway, I'm posting a photo of it here since I wasn't able to include it in my "Star Tours Preview" post last month. 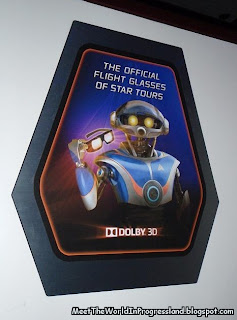 Disney's "exit through a souvenir shop" trick usually doesn't work on me, but this time I did make a purchase. The following scans are from a new souvenir postcard booklet. I have a few postcards from the eighties of the old "destination posters" that used to hang above the Star Tours exit ramp, but I need to go digging for those. I'll try to get those posted later. 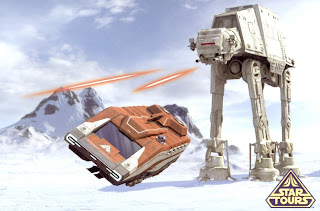 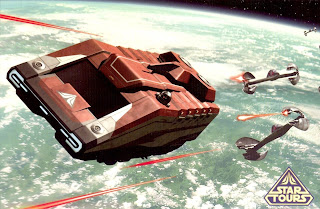 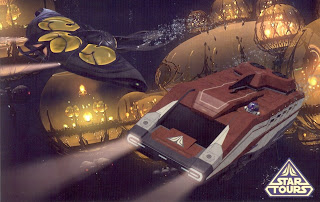 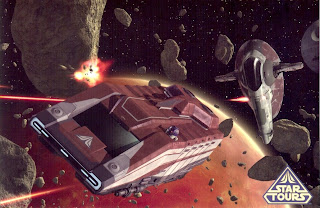 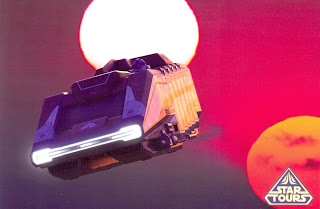 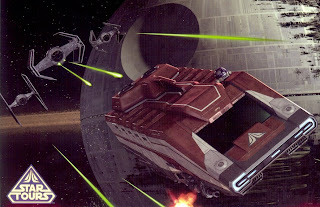 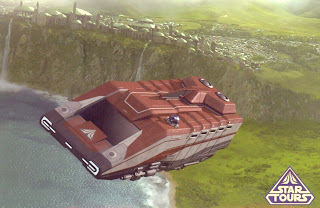 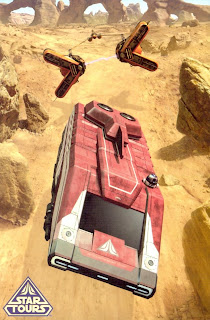 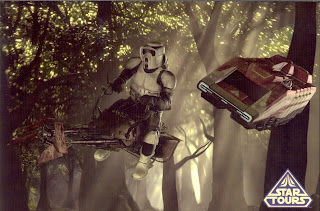 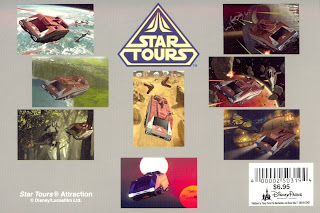 So that was my short DL trip from last week. This week, I decided to make a quick stop by the Disneyland Hotel after work, because I had heard there was a new water feature that was unveiled in front of the Wonder/Frontier Tower. During my last visit to the Hotel, this area was still behind construction walls. 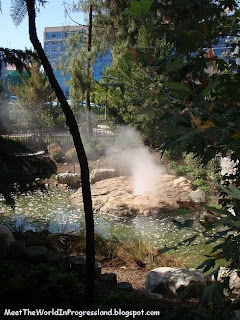 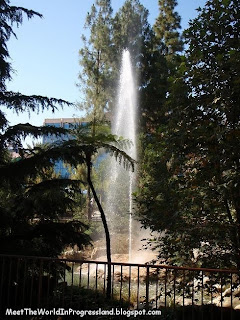 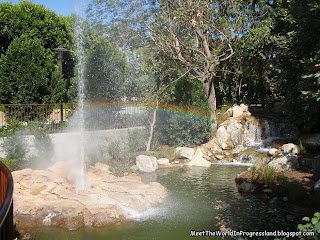 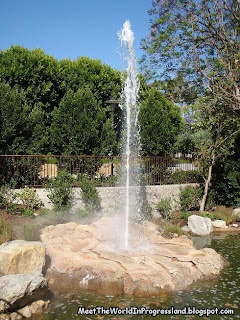 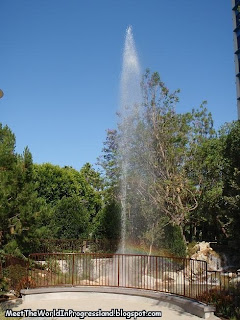 It isn't as spectacular as the old hotel waterfalls, but I guess it's better than just a patch of grass.

Congrats on 300, Chris! You sure got a lot done before closing...sometimes I guess it pays to have an itch!

On the day we saw each other at the Hotel they changed all the directional signs while I was in Trader Sam's! When I showed up there was a sign directing to the Wonder Tower; when we came out about 80 minutes later signs directing to the Adventure and Frontier Towers were up!

I was gonna do the same thing! Go to the Parks, that is...I should have done it.

No, you are NOT being picky. I wish things would say Disneyland or California Adventure instead of Disneyland Resort. By the way, the other day I found a "vintage" coffee mug at a thrift store from DCA's opening year!

I am thinking of going to the Parks on Tuesday or Wednesday night. Anyone wanna meet up?

Congratulations Tokyo on 300! Nice shot of the Pinocchio sign.

Wow, I love those Haunted Mansion Quarters, and the Machine! I'm not a fan of the "Resort" stamp, but at least it doesn't say "Disney Parks." There would probably be a riot on Main Street if they did that.

I never saw the Parking Structure on my trip. Is there a themed pressed penny machine there? If there's not, there should be!

Dave, I had another "itch" last night, so I went again...but this time I got there before Mermaid/DCA closed!

Progressland, That's funny about the signs....you'd think it could be pretty confusing for people staying at the hotel. Maybe they warned them about the impending name change when they checked in.

Connie, I'm going to be emailing you about a possible park "meet."

SWS, Thank you! I just got your email about SW parking sections. Sorry, there aren't any SW sections....but I'm going to email you in case you don't check back here.

Dan, Thanks! I liked those HM coins too, but I don't have any of the Disney pressed coins and I've decided I just don't need to start collecting them now. Tokyo DL has those machines EVERYWHERE and they sell the souvenir books for storing them and I've been very tempted on my Tokyo visits, but I've stayed strong and not purchased any of them! Oh, and there aren't any pressed coin machines in the parking structure...not yet anyway! By the way, when I went to the park last night, I noticed that the brand new merchandise bags now say "Disney Parks" and have BOTH Orlando's and Anaheim's castles on them. How much money can that really be saving them?

CONGRATULATIONS on 300 posts! Thanks for all of them, they are informative and tons of fun.

I miss the old waterfalls, but I do like the geyser water feature!